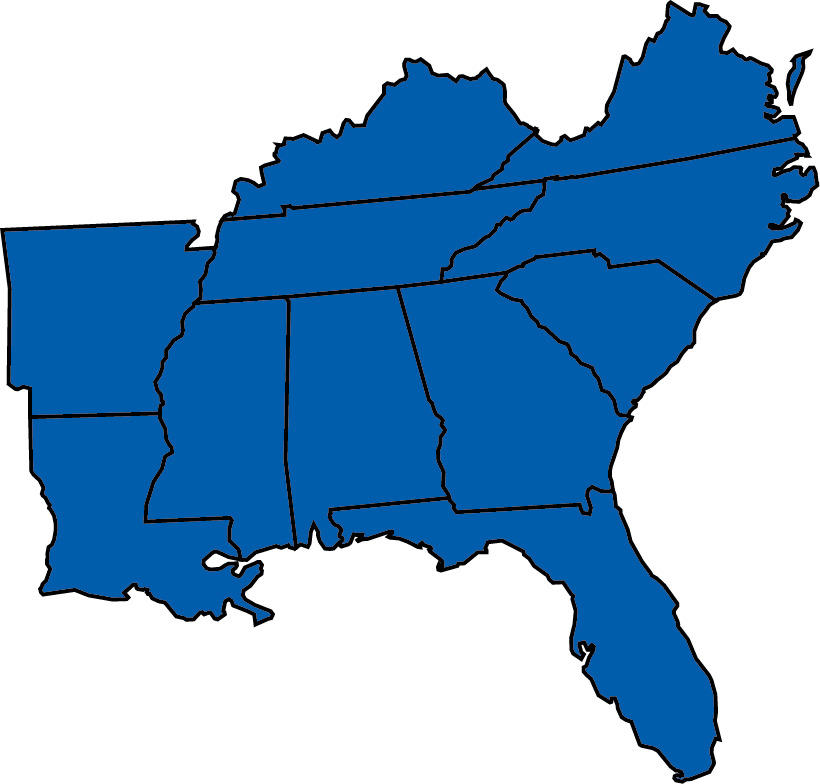 Cities across the Southeast are experiencing more and longer summer heat waves. Sixty-one percent of major Southeast cities are exhibiting some aspects of worsening heat waves, which is a higher percentage than any other region of the country.

In the Southeast, poor air quality can result from emissions (mostly from vehicles and power plants), wildfires, and airborne allergens. The major urban centers in the Southeast are already impacted by poor air quality during warmer months. The Southeast has more days with stagnant air masses than other regions of the country (40% of summer days) and higher levels of fine (small) particulate matter (PM2.5), which cause heart and lung disease. The fast growth rate of urban areas in the Southeast also contributes to aeroallergens, which are known to cause and exacerbate respiratory diseases such as asthma. Urban areas have higher concentrations of CO2, which causes allergenic plants, such as ragweed, to grow faster and produce more pollen allergen than in rural areas.

An assessment by the Florida Department of Health determined that 590,000 people in South Florida face “extreme” or “high” risk from sea level rise, with 125,000 people living in these areas identified as socially vulnerable and 55,000 classified as medically. In addition to causing direct injury, storm surge and related flooding can impact transportation infrastructure by blocking or flooding roads and affecting access to healthcare facilities).

The Southeast is the region of the country with the most favorable conditions for the Aedes aegypti mosquito and thus faces the greatest threat from diseases the mosquito carries. Summer increases in dengue cases are expected across every state in the Southeast. Warmer conditions may have facilitated expansion of the geographic range of mosquito populations and could potentially increase their capacity to transmit Zika virus. Zika virus can cause a wide range of symptoms, including fever, rash, and headaches, as well as birth defects.

The North Carolina Climate and Health Program primarily focuses on health effects related to extreme heat and wildland fire smoke. The work aims to serve elementary school students, farmworkers, local public health preparedness and emergency management staff, low income earners, older adults requiring nutritional support, and young adults attending county parks. To address smoke from wildland fires, a health curriculum for elementary students was designed to teach them about smoke and health, to be taught in connection with Smokey the Bear in Hoke County. Additionally, an implementation and monitoring strategy was created to plan for health impacts of wildland fires and to provide health education on the topic. A main focus of the North Carolina Climate and Health Program has also been on heat. The program has conducted statewide heat related illness emergency department visit syndromic surveillance. Heat health alert systems were implemented in Bladen, Robeson, Sampson, and Scotland counties. Education campaigns were also conducted in these four counties and were personalized by county to target each county’s at-risk population. The campaigns focused on agricultural workers, low income people, mobile home residents, the elderly, and the youth.

The Florida Building Resilience Against Climate Effects (FLBRACE) Program is working to improve the ability of the public health sector to respond to the health effects of climate variability by incorporating the best available science into routine public health practice. The primary hazards addressed by FLBRACE include extreme heat, wildland fires, flooding, water-borne diseases, and extreme weather events, such as hurricanes and tornadoes. Primary health outcomes include allergies, asthma, heat-related illness and death, injury, mental health disorders, stress-related disorders, and stroke. FLBRACE primarily assists community health departments, especially those serving vulnerable populations, such as the elderly or residents living in coastal communities. FLBRACE has developed a series of climate and health profiles that identify and describe key risk factors and health impacts anticipated in Florida. Among these is a study of the health effects of tropical storms and hurricanes in Florida using emergency department data, birth records, carbon monoxide poisoning data, and food-borne and water-borne reports. The program has also developed a series of touchstone event summaries that highlight exceptional weather events and related health outcomes in Florida.

New Orleans will develop a heat monitoring pilot program, through which thermometers and heat sensors will be distributed in the community to gather temperature data in partnership with a local community organization, with the eventual goal of developing a better outreach campaign about extreme heat and heat-related illness. The project will focus on improving messaging and health for at-risk populations.