Be sure to join our live Newsletter Zoom on June 29, 2021, at 8pm ET, and check out all the activities (digital scavenger hunt—Goosechase, Zoom, social media challenge, and Ask a CDCer) at the end of each newsletter. Join in on the fun and win some prizes! Also, be on the lookout for the recently added activity, a pre-Zoom game (Kahoot) that will be emailed the day of the Zoom. 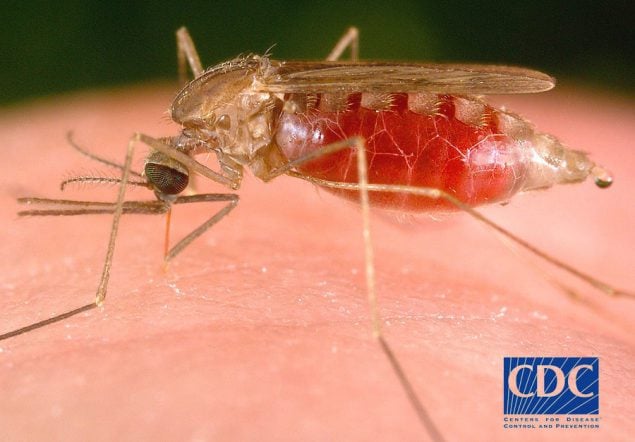 Malaria is a mosquito-borne disease caused by a parasite. People with malaria often experience fever, chills, and flu-like symptoms. Left untreated, they may develop severe complications and die. In 2019, an estimated 229 million cases of malaria occurred worldwide and 409,000 people died, mostly children in the African Region. About 2,000 cases of malaria are diagnosed in the United States each year. Most cases in the United States are in travelers and immigrants (“imported” malaria) returning from countries where malaria transmission occurs, many from sub-Saharan Africa and South Asia. 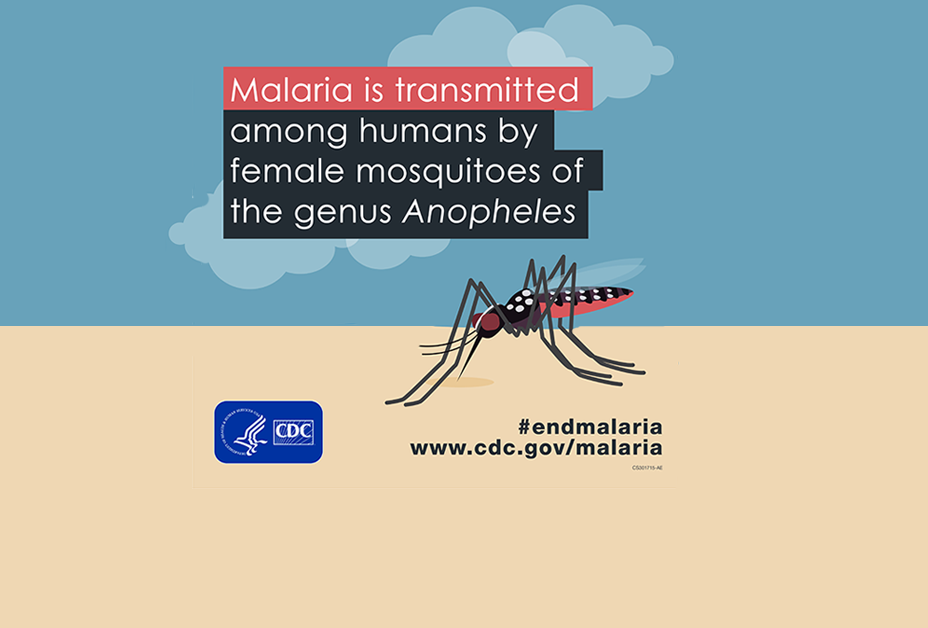 Usually, people get malaria by being bitten by an infective female Anopheles mosquito. Only Anopheles mosquitoes can transmit malaria and they must have been infected through a previous blood meal taken from an infected person. When a mosquito bites an infected person, the small amount of blood taken in contains microscopic malaria parasites. About one week later, when the mosquito takes its next blood meal, these parasites mix with the mosquito’s saliva and are injected into the person being bitten.

Because the malaria parasite is found in red blood cells of an infected person, malaria can also be transmitted through blood transfusion, organ transplant, or the shared use of needles or syringes contaminated with blood. Malaria may also be transmitted from a mother to her unborn infant before or during delivery (“congenital” malaria).

Plasmodium falciparum is the type of malaria that most often causes severe and life-threatening malaria; this parasite is very common in many countries in Africa south of the Sahara desert.

Because malaria causes so much illness and death, the disease is a great drain on many national economies. Since many countries with malaria are already among the poorer nations, the disease maintains a vicious cycle of disease and poverty.

CDC’s Division of Parasitic Diseases and Malaria (DPDM) prevents and controls parasitic diseases, including malaria, in the United States and throughout the world through evidence-based public health action (i.e., providing diagnostic, consultative, and epidemiologic services and training). 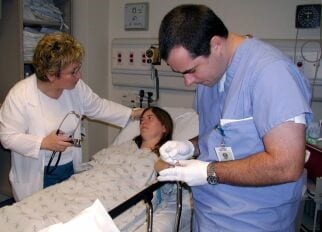 A patient with fever who had recently traveled to a malaria-endemic country is being evaluated in the emergency room.

To continue to prevent illness and deaths due to malaria, CDC works within the United States:

CDC has a long history of collaboration with Ministries of Health and other partners to fight malaria. CDC provides technical expertise in policy development, program guidance and support, scientific research, and monitoring and evaluation of progress toward Roll Back Malaria goals. CDC also conducts strategically targeted research to ensure that we are prepared to confront the changes in malaria epidemiology that have resulted as a consequence of factors such as the recent scale-up of malaria interventions, climate change, and population movement.

In public health, we identify the problem by using surveillance systems to monitor health events and behaviors occurring among a population. 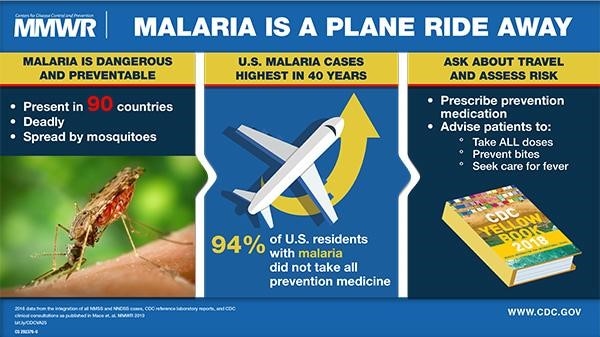 Annual reports are created and published through the MMWR. Reports are also analyzed by the prevalence of malaria cases by species of Plasmodium. Let’s consider infections by the species P. falciparum as our example. From the table below we see that P. falciparum is the most common form of Plasmodium in the United States and has steadily increased each year in percentage among all infections.

The map below shows the number of malaria cases in every state in 2017.

After we’ve identified the problem, the next question is, “What is the cause of the problem?” For example, are there factors that might make certain populations more susceptible to diseases, such as something in the environment or certain behaviors that people are practicing?

People who are heavily exposed to the bites of mosquitoes infected with P. falciparum are most at risk of dying from malaria. People who have little or no immunity to malaria, such as young children and pregnant women or travelers coming from areas with no malaria, are more likely to become very sick and die. 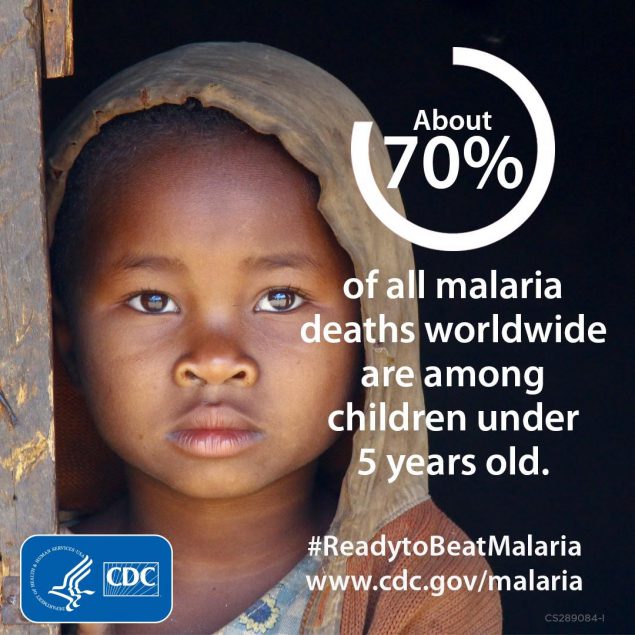 Poor people living in rural areas who lack access to health care are at greater risk for malaria. As a result of all these factors, an estimated 90% of deaths due to malaria occur in Africa south of the Sahara; most of these deaths occur in children under 5 years of age.

Once we’ve identified the risk factors related to the problem, we ask, “What intervention works to address the problem?” We look at what has worked in the past in addressing this same problem and if a proposed intervention makes sense with our affected population.

In most malaria-endemic countries, four interventions—case management (diagnosis and treatment), ITNs, IPTp, and IRS—make up the essential package of malaria interventions. 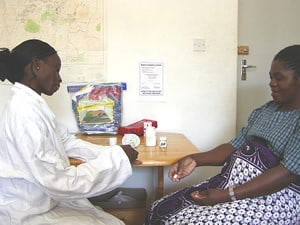 A pregnant woman during an antenatal consultation in Malawi receives IPTp. The plastic bag on the table holds an insecticide-treated bed net, another method for protecting her against malaria.

Occasionally, other interventions are used:

In addition, several companies and groups are at work developing a malaria vaccine, but there is currently no effective malaria vaccine on the market.

One example of how CDC implements the intervention is through the U.S. President’s Malaria Initiative (PMI)external icon.

PMI is a U.S. Government interagency initiative designed to drastically reduce malaria deaths and illnesses in target countries in sub-Saharan Africa with a long-term vision of a world without malaria. The initiative was announced on June 30, 2005, when President Bush pledged to increase U.S. funding of malaria prevention and treatment in sub-Saharan Africa by more than $1.2 billion over 5 years (FY2006–FY2010). 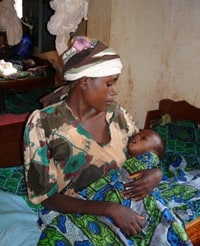 With passage of the Lantos-Hyde Actexternal icon in 2008, PMI developed a U.S. Government Malaria Strategy (2009–2014) which included achieving Africa-wide impact by halving the burden of malaria in 70 percent of at-risk populations in sub-Saharan Africa, or approximately 450 million people. The next PMI Strategy (2015–2020) reaffirmed support for the long-term goal of worldwide malaria eradication and aimed to build on progress made in the last decade and address new challenges that could hamper further progress. The strategy was in line with the goals articulated in the Roll Back Malaria Partnership’s Action and Investment to Defeat Malaria 2016–2030external icon and the World Health Organization’s Global Technical Strategy for Malaria 2016–2030external icon.

As you can see, using The Public Health Approach helps public health professionals identify a problem, find out what is causing it, and determine what solutions/interventions work.

This month’s feature focuses on World Malaria Day and the continued fight against malaria. 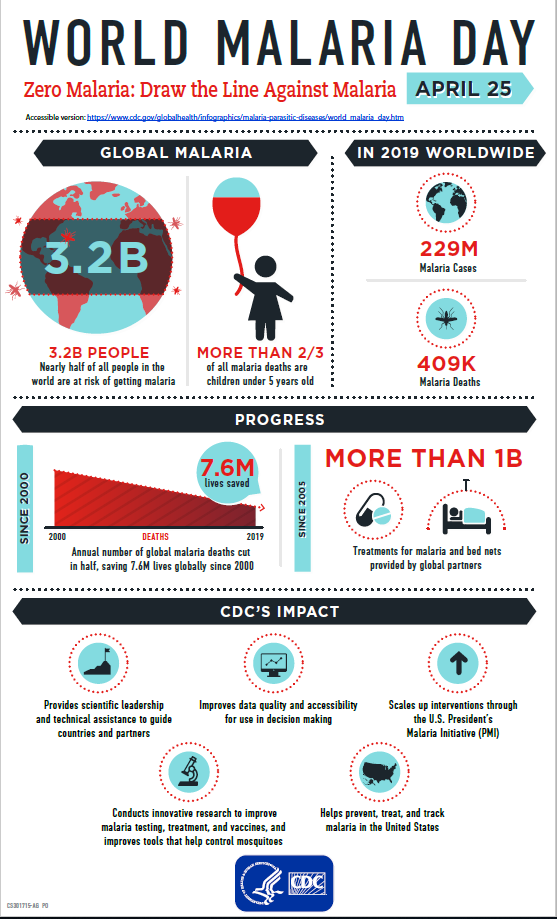 April 25 marked World Malaria Day, bringing awareness about one of the most deadly diseases in the world. The theme from April 2021, “Zero Malaria – Draw the Line Against Malaria,” reminds each of us of the role we can play, individually and collectively, to help achieve a world free of malaria.

There has been tremendous progress in the fight against malaria. Contributions by CDC; the U.S. President’s Malaria Initiativeexternal icon(PMI); the Global Fund to Fight AIDS, Tuberculosis, and Malariaexternal icon; and the Roll Back Malariaexternal icon partnership have been paramount to the gains achieved. Since 2000, more than seven million lives have been saved and more than a billion cases of malaria have been prevented.

Still, an estimated 3.2 billion people—almost half the world’s population across 91 countries or territories—are at risk of malaria. Malaria killed an estimated 405,000 people and caused 228 million people to become ill in 2018.

The human and economic costs of malaria—estimated to be at least U.S. $12 billion per year—are devastating and real. Today, despite the advances and documented successes, malaria remains responsible for many deaths of children under five years old, taking the life of a child in Africa every two minutes.

The CDC Foundationexternal icon is an independent nonprofit and the sole entity created by Congress to mobilize philanthropic and private-sector resources to support the Centers for Disease Control and Prevention’s critical health protection work.

Malaria Zero has one bold goal: to eliminate malaria from the island of Hispaniola, which includes Haiti and the Dominican Republic. Hispaniola is the only island in the Caribbean where malaria is still endemic.

Learn how to be a part of the effort to eliminate malaria from homeexternal icon.

Out of the CDC Museum Collection – Malaria

This month we go into the CDC Museum Collection to bring you visual documentation that was used by the United States War Department during World War II.

In 1943, Captain Theodor “Dr. Seuss” Geisel worked with director Frank Capra’s Signal Corps and produced animated training films, documentaries, and booklets. Effective education on the spread of diseases such as malaria is critical. He created the pocket-sized booklet This is Ann: she is dying to meet you to creatively inform service members how they can contract malaria through the bite of the Anopheles mosquito.

All June 2021 Teen Newsletter winners will be announced 06/29/21 during the Zoom – see individual deadlines below, as applicable.

To qualify for Future CDCer, you must participate in all newsletter activities (scavenger hunt—Goosechase, Zoom, social media challenge, Ask a CDCer, and pre-Zoom game—Kahoot). All that qualify will be entered into a prize drawing for a CDC Museum Public Health Academy t-shirt.

*The following newsletter activities: Scavenger Hunt, Zoom, and Social Media Challenge are available for your participation anytime – even after deadlines. To be eligible for prizes you must complete activities by the deadline.

Want to do a fun digital scavenger hunt?

Want to learn more from CDCers who work on malaria?

Advance registration required. All who register by or on 06/29/21 3pm ET will be entered into a prize drawing.

Click for instructions and to submit your postexternal icon.

Do you have a question for a CDCer who works on malaria?

Submit your question for the malaria experts who will be joining the Zoom on 06/29/21 at 8pm ET.

Step 6: Go to https://www.cdc.gov/parasites/malaria/index.html to complete your missions