Findings from the first year of ECHPP are based on information summarized in the Year 1 ECHPP Monitoring and Evaluation Report. The Year 1 Report contains aggregate, quantitative and qualitative programmatic data reported to CDC by ECHPP health department grantees through Workbook #3 and the Core Process Data Report for the Oct. 2010 to Sept. 2011 time period.

Grantees implemented different combinations of activities with various degrees of scale to address local jurisdiction HIV prevention needs. Grantees also developed local program objectives for each year of their ECHPP plan which varied widely across jurisdictions. For example, some grantees identified a large number of planning objectives (e.g., finalize a protocol for provision of PEP, convene a PCSI workgroup) and few objectives related to actual implementation (e.g., distribute 1 million condoms to venues that target HIV-positive persons and persons at high risk for HIV infection, provide medical case management with treatment adherence counseling to 5,000 people with HIV). Other grantees had a more evenly distributed mix of planning and implementation objectives. Also, some objectives were broad in scope while others were more focused. Some jurisdictions needed more time to scale up a specific intervention (e.g., if they had not previously implemented the intervention); therefore, more planning was needed during the first year to determine the optimal level of implementation. Most of the objectives were specific to Year 1 activities only, although some objectives extended into Year 2 (new local objectives are added annually by grantees).

Monitoring grantee progress toward local ECHPP program objectives over time will provide insight into the extent to which programs were implemented as intended (when used in conjunction with other information reported in routine progress reports). For example, ECHPP may not have the anticipated level of impact in some areas if there is weak and/or delayed implementation of specific programs.

The data in Figure 1 suggest that progress made toward scale-up of HIV-related activities during the first year of ECHPP was similar across most intervention categories. However, some activities may have been harder to scale up than others. For example, only moderate progress was made toward achieving PEP-related objectives, perhaps because PEP is relatively new to most health departments and they have only recently begun to conduct relevant planning and implementation activities. Figure 1 also illustrates a significant shift in programmatic services due to the ECHPP model and the National HIV/AIDS Strategy pdf icon[PDF – 1 MB]. The 2015 Strategy objectives are ambitious and, as a result, ECHPP grantees set ambitious local objectives in Year 1 in order to meet the 2015 targets. It should also be noted that ECHPP grantees spent the first part of Year 1 developing their ECHPP plan and these data represent an initial implementation phase that was less than a full year.

Health departments planning to scale up their HIV activities to address National HIV/AIDS Strategy goals and objectives should allow ample time for planning and implementation. Furthermore, local program objectives should be realistic and achievable.

Early in Year 1, CDC evaluation staff supported conference calls with jurisdictions to assess reporting capacity for a variety of process measures. The final process measures, considered to be the “core” ECHPP process measures, were deemed reportable by most jurisdictions and will be used by CDC to compute key indicators. Grantees are required to report these core process measures throughout the project period (once for Year 1; semi-annually for Years 2 and 3). ECHPP plans should represent all HIV prevention, care, and treatment activities supported by health departments, regardless of funding source (e.g., publicly funded services such as those funded by CDC and other federal agencies; privately funded programs such as grants and foundation dollars). Thus, where feasible, grantees are to report the core process measures regardless of funding sources (public or private).

Table 1 lists the number of jurisdictions that implemented each intervention category in Year 1 and the number that reported core process data for each category.

a Grantees were not required to report core process measures for this intervention category.
b Although only three grantees began implementing PEP in Year 1, all grantees conducted planning activities for PEP.
c Although federal funding can no longer be used to support syringe access services, six grantees were able to provide information about syringe access programs they support funded from other sources for the purposes of evaluating ECHPP.

Key process indicators for Year 1 are summarized below (computed from process data submitted by grantees). Data were reported in aggregate, were not de-duplicated for persons participating in more than one intervention or program, and represent all programs and services in the jurisdiction supported by the health department whether publicly or privately funded for which information was available. HIV status for health department clients may be self-report or confirmed through HIV testing in each jurisdiction. Community-based organization activities implemented with direct funds from CDC in these jurisdictions are not included.

CDC evaluation team staff communicated with each ECHPP grantee directly (via phone calls and e-mails) to ensure that CDC had a clear understanding of all programmatic data submitted and that the information was appropriately matched to Workbook #3. However, no specific quality assurance procedures were conducted beyond that which was conducted by the health departments. These data are complete to the extent that grantees were able to collect and report programmatic data for each ECHPP intervention. CDC provided grantees with definitions for each measure and guidance for how to report the information. To provide context for the findings, the number of people living with a diagnosis of HIV infection (HIV prevalence) and the number of diagnoses (cases) of HIV infection in these jurisdictions are included in select graphs (using the most recent HIV surveillance data available). The estimated number of individuals in need of ECHPP services and programs was not available.

In Year 1, 123,216 individuals participated in one or more behavioral risk reduction interventions.

Nine grantees were able to report these data stratified by HIV status, transmission risk group, and race/ethnicity. In these jurisdictions, 27,192 participants in behavioral risk reduction interventions were HIV-positive; 36,091 were MSM; 29,366 were African American; and 19,649 were Hispanic/Latino. 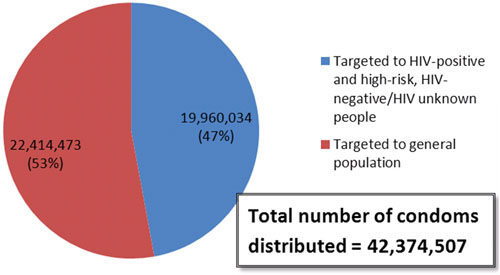 Retention, Re-engagement in Care, and ART Adherence for HIV-positive Individuals 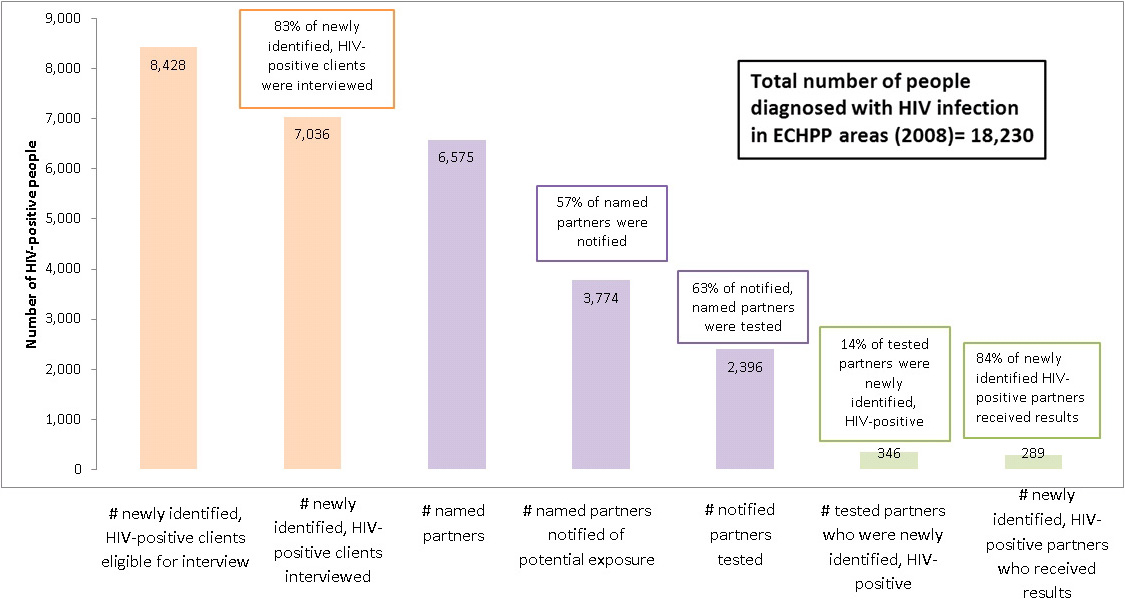 In Year 1 (October 2010 to September 2011), a variety of social marketing campaigns that promoted HIV prevention/sexual health information and raised awareness about HIV prevention services were conducted in the 12 ECHPP areas. The campaigns targeted one or more high-risk populations (e.g., MSM, HIV-positive persons, transgender persons, African Americans). Examples include national campaigns like Greater Than AIDS and local campaigns to support national HIV/AIDS awareness days. These campaigns resulted in an estimated 143,365,223 impressions or exposures to HIV prevention messages in the 12 ECHPP MSAs. Community-level interventions typically involved community-wide HIV testing events and implementation of behavioral risk reduction interventions, such as adaptations of Popular Opinion Leader and Mpowerment. These interventions are not expected to have the same reach as the social marketing campaigns. An estimated 73,461 people were exposed to community-level interventions in the 12 ECHPP areas during the reporting period. 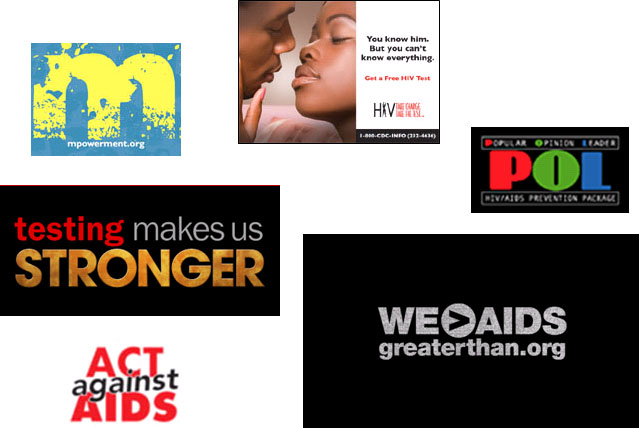 Quantitative and qualitative data associated with other ECHPP activities (e.g., perinatal transmission interventions; HIV testing; and policy, systems, and environmental interventions) will be described on this website in the near future once processing is complete.

The programmatic data reported by grantees are useful in understanding health department service coverage and reach during the first year of ECHPP. Additionally, this is the first time that CDC has been in a position to report on health department-supported programmatic activities that occur in high-prevalence areas that are supported by multiple public and private funding sources. The ECHPP grantees were successful in reporting data for the majority of the core process measures and in identifying strategies to improve their reporting capacity across a variety of measures. CDC expects grantee reporting capacity in these 12 MSAs to improve throughout the project period as agency infrastructure and partnerships continue to develop. Strategies to improve data reporting capacity have included building new partnerships within the health departments, addressing data sharing barriers (across offices within the health departments and when accessing data from other service providers), and developing streamlined systems to better monitor health department programs and services.

Parallel to the efforts by ECHPP grantees, CDC is collaborating with other federal agencies to obtain HIV-related programmatic data directly for these areas. For example, programmatic data related to HIV testing and comprehensive prevention services for HIV-positive people that may be available at Health Resources and Services Administration and Substance Abuse and Mental Health Services Administration have been identified and requested by CDC for the evaluation baseline period (2008 to 2010). Ultimately, the goal of this cross-agency effort is to continue to decrease the reporting burden for publicly funded grantees by improving data sharing practices at the federal level.