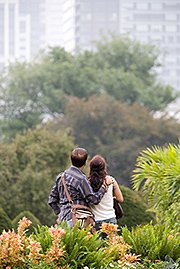 San Francisco’s Municipal Railway, known as Muni, has served the residents of San Francisco since 1912 and moves 200 million riders around the city yearly. For the first time in more than 30 years, the city is extending Muni, adding 1.6 miles of track and three new stations along the Central Subway within the South of Market (SoMa) District.

In 2011, the San Francisco Planning Department began a new plan for the Central Corridor, a previously industrial area around the new Central Subway stations that is now quickly changing into a neighborhood where people live and work. The plan’s purpose was to make the area more pedestrian-friendly and encourage mixed-use and higher density development. Before drafting the plan, the Planning Department asked the San Francisco Department of Public Health (SFDPH) to conduct a Health Impact Assessment (HIA) to identify potential health impacts on Central Corridor residents. A recipient of the Centers for Disease Control and Prevention (CDC) “HIA to Foster Healthy Community Design” grant, SFDPH took on this project as one of their 2012 HIAs.

To collect data for the HIA, SFDPH assessed the neighborhood using the Sustainable Communities Index (SCI), a list of more than 100 social and environmental indicators that can shed light on the physical, mental, and social health status of a community. They combined their findings with feedback from Central Corridor residents that the Planning Department collected from online surveys, workshops, and meetings with 15 neighborhood groups. SFDPH found similarities between the results of the SCI assessment and the residents’ top neighborhood health concerns, including the lack of green space and pedestrian and biker safety. The HIA process ensured that community voices, and health and environmental justice issues, were heard.

“This HIA has been very rewarding,” says SFDPH Epidemiologist and HIA Team Lead Meg Wall. “When you’re focusing on a single neighborhood, you can really hone in on the concerns and issues for that specific area, and then present the information to someone who can make a difference.”

“We’ve used HIA to work with the Planning Department and other city agency partners in the past,” says Tim Choi, HIA Specialist at the San Francisco Public Health Foundation. This includes collaborations on subjects ranging from healthy housing to transportation to land-use planning, with agencies such as the San Francisco Municipal Transportation Agency and San Francisco County Transportation Authority. “We’ve developed a sense of trust with other agencies. Based on past collaboration, we’ve demonstrated that we can provide a reliable, timely, evidence-based perspective on health to many fields.”

Wall agrees. “This HIA shows how inter-disciplinary work in San Francisco is evolving. Now, other agencies come to SFDPH because they see that collaboration can help everyone.”

Agencies are realizing the benefits of using HIA as an additional lens to examine issues; it strengthens their case and highlights health costs and benefits that otherwise may not emerge. “In HIA, the health data speaks for itself. Data is what allows us to make a solid case for, say, more attention to environmental and health equity,” says Choi. “HIA is systematic—it’s about laying out the evidence to make a more informed and strategic decision. The use of HIAs reminds decision-makers that a clear connection exists between place and health.”

Choi also believes that the HIA process is flexible and appropriate for a variety of project lengths and types. “Not all HIAs require lots of funding. You certainly need time and resources, but there are a number of ways to distill the essence of HIA and bring in meaningful, interdisciplinary health analyses while still keeping costs down and meeting deadlines.” Some of these abridged HIA tools include the CDC’s Healthy Community Design Checklist [PDF – 330 KB], and Design for Health’s Preliminary HIA Checklist, HIA Rapid Assessment, and HIA Threshold Analysis.

Perhaps most important, Choi feels that HIA creates opportunities for cooperation among agencies and communities by appealing to their common interests. “HIA is a beautiful tool for bringing people together in the interest of public health and welfare. Everybody is an advocate for health—they might not say it explicitly, but they know it’s important. Everyone can agree on that.”