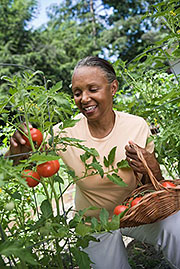 In the early 1900s, North Omaha, Nebraska, the birthplace of Malcolm X, was a thriving African American neighborhood. Rich in history and culture, the area became well-known for its jazz, swing, and blues music. Today, North Omaha has fallen on economic hard times, worsened by poverty and limited job and housing options.

In 2007, a group of business and community leaders formed a coalition to return the neighborhood to its former glory. Part of their plan was improving Adams Park, a 68-acre green space next to the Malcolm X birth site. They hoped to create a “Central Park” for North Omaha that would benefit residents, attract visitors, and encourage development and investment in the surrounding neighborhoods. Building a new urban farming and community gardening center within Adams Park was the cornerstone of the plan. Other aspects included new trails and entrances, a multipurpose field for sports and events, and a swimming pool.

“Volunteers surveyed every grocery and convenience store in the county, rating them on their healthy food options,” says Andy Wessel, DCHD community health planner. “Full-service grocery stores ranked the highest, but in North Omaha, they were few and far between. Our data on heart disease, diabetes, and other health issues also pinpointed North Omaha as an area where improving access to healthy food could make a big difference.”

“We saw the opportunity to bring health and health equity into the revitalization effort around Adams Park,” says Wessel. “In the beginning, a lot of people were skeptical about HIA because they felt it would slow down the process. At the end of the day, the Adams Park HIA showed how including health and community concerns was a real benefit for decision-makers. I credit a lot of that success to CDC’s Healthy Community Design Initiative for their funding, training, and hard work in helping us implement an HIA.”

For the HIA, DCHD collected and analyzed data on health, demographics, food access, crime, traffic crashes, and land use in this North Omaha neighborhood. They interviewed experts and reviewed scientific research to understand how changes in Adams Park could impact health.

DCHD’s partners, the African American Empowerment Network and the North Omaha Neighborhood Alliance, also contributed to the HIA by providing valuable insight into residents’ concerns and priorities. Wessel believes that community input is a key part of HIA.

“Two values that HIAs promote are democracy and equity,” he says. “That means making sure that decision makers ask questions like, ‘What are the hopes and concerns of the people most affected by this decision?’ and ‘How is this decision likely to affect the lives of those who are already struggling?’ HIA ensures that groups that often go unheard are involved with finding answers to those questions.”

The HIA showed that the Adams Park plan could greatly improve health in North Omaha. The plan’s cornerstone, the urban farming and gardening center, would provide local residents with greater access to affordable fruits and vegetables. Residents would also have a space for social interaction and exercise.

The Adams Park plan has other benefits, too. With the new trails and entrances, walkers and bikers could easily access the park and boost their physical activity levels. The HIA also recommended that nearby schools and groups use the field, pool, and other facilities to offer after-school and summer activities for local children.

The plan could even impact health beyond park borders. Research shows that additional benefits of a community garden are raising property values and reducing crime within a quarter mile span. The HIA advised the farming and gardening center to help convert vacant lots in the surrounding neighborhoods into gardens. Soon, new community gardens could spring up all across North Omaha.