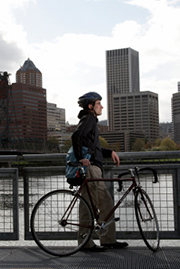 Under a 2007 law passed by the state legislature, Oregon has one of the most ambitious greenhouse gas reduction timelines in the nation. To meet the law’s reduction requirements, the Portland metropolitan regional government (Metro) created the Climate Smart Communities Scenarios (CSCS) planning project.

The CSCS project looks at different combinations of transportation and land-use policies that Metro could use to reduce greenhouse gas emissions in the Portland area. These groups of potential actions, or “scenarios,” combine various reduction measures like improving public transit, designing walkable neighborhoods, and using pricing policies, such as a carbon tax or road use fee, to discourage car use.

The Oregon Health Authority (OHA) is a recipient of the Centers for Disease Control and Prevention “Health Impact Assessment to Foster Healthy Community Design” grant. Metro partnered with OHA on a Health Impact Assessment (HIA) to bring public health and health equity considerations to the CSCS project as the regional government developed its top three scenarios. The HIA also created a list of health criteria for Metro to consider when they select their best scenario choice to enact in 2014.

“HIA was a perfect fit for the CSCS project,” says Andrea Hamberg, the HIA Program Coordinator at OHA. “The scenario planning strategy that Metro used asks questions like, ‘What do we want the future to look like? What steps should we take now in order to get there?’ And HIA is a way to find some answers—it looks at how decisions made today can change public health in the future.”

The results of the HIA suggest that some measures to reduce greenhouse gas emissions can also improve public health. The HIA especially recommends strategies that create incentives for residents to walk or bike, and that ensure safety by making streets friendly to pedestrians and cyclists. Not only do these strategies reduce greenhouse gas emissions, they also reduce health issues related to air pollution, make residents more physically active, and decrease the number of people hurt or killed by car crashes.

The HIA also focuses on equity, making sure that the added benefits from reducing emissions improve health across all groups. For example, the results reveal that reducing car use makes air quality better, both for drivers and for the residents of low-income neighborhoods located near high-traffic areas.

Identifying these co-benefits has been a large part of the HIA’s success. “This decision impacts three counties and 25 cities, and all these jurisdictions must agree,” says Hamberg. “Learning the co-benefits of certain policies has really boosted the support for implementing them.”

A Story of Success

The CSCS project is now in its final phase, and the effects of the HIA look promising. Metro’s top three scenarios were approved in May 2013 and the finalized list of criteria for choosing the best scenario includes the health-based criteria recommended by the HIA. Hamberg considers this a significant success and hopes other organizations will follow Metro’s lead in collaborating with OHA on HIAs.

In fact, the impact of this HIA already extends past the CSCS project and the Metro region. Another Oregon metropolitan planning body, the Lane Council of Governments, is using the CSCS project HIA as a model while creating its own list of criteria for choosing a greenhouse gas reduction plan.

“The Climate Smart Communities Scenarios HIA has really bolstered OHA’s partnership with Metro,” she says. “Now we at OHA better understand Metro’s work, and Metro better understands health and equity. The HIA got more people thinking about health in decision-making, and that’s a benefit that is impossible to quantify.”

HIA for the Future

Hamberg believes that HIA is important because it helps professionals in various fields think about the impact of their work on public health, often for the first time.

“My favorite moments in HIA work are light-bulb moments,” she says. “I was at an HIA training with a planner who worked right near the county health department, but had never had a professional conversation with the staff there. He spent the first few hours of training shaking his head, saying, ‘I don’t understand why I have to be here.’

“Then, three hours in, we were asking people to voice their ideas on what affects health in the county, and all of a sudden I saw a light-bulb go off in his head. It was like he said, ‘Oh, I get it now! Everything I do has an impact on health.’ I just loved that moment. I don’t think he ever considered public health before working with HIA.”

Hamberg believes that using HIA to help decision-makers consider the impact of potential projects and policies on public health is crucial in reducing healthcare costs.

“Decision-makers need to understand the costs associated with poor public health, costs that will keep climbing unless we act to prevent that from happening. Acting now will pay huge dividends in the future. It’s like that old saying, ‘When is the best time to plant a tree? 20 years ago.’ We can’t go back and do that, but the second-best time is now.”