When COVID-19 hit Southwest Kansas in the spring of 2020, there was little information available about the disease in languages other than English. Many essential workers from refugee communities turned to their neighbors, Physician Assistant Erin Keeley and Doctor Rachael Svaty, with their questions. The providers had a difficult time finding educational materials for auditory learners who prefer face-to-face interactions.

“I lost one neighbor to COVID-19. His family was hospitalized. Family after family fell sick, and we had limited testing resources and many barriers for our neighbors to access testing sites. Our first major public health effort was to address those concerns,” said Keeley, who works at Kearny County Hospital. 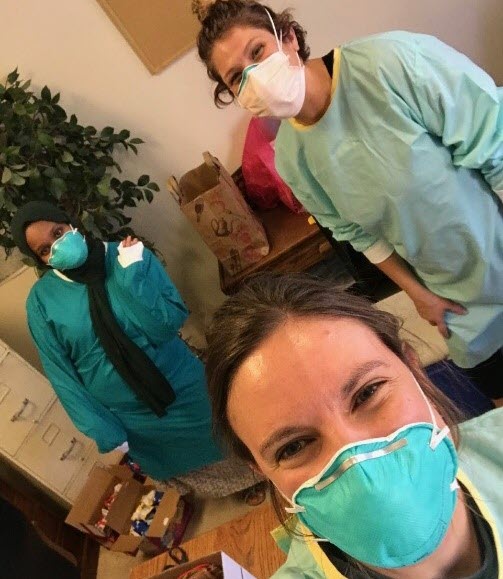 PA Erin Keely and Clinic Manager Lacey Mollel take a selfie with a community member who served as Somali translator, during a COVID-19 education, screening and testing event that took place in 2020.

Keeley and Svaty organized a COVID-19 education, screening, and testing event at Keeley’s apartment complex, where many refugees live. They went door to door, eventually screening 60 households and offering free on-site testing for anyone with COVID-19 symptoms. Eight in 10 of those tested had COVID-19.

Keeley and Svaty, a physician with the Garden City Plaza Medical Center at St. Catherine Hospital, attributed the event’s success to their partners, the Finney County Health Department and Kearny County Hospital. The health department provided testing supplies and PPE for volunteers. The hospital registered individuals and followed up with them via telemedicine. In addition, multilingual friends and community leaders volunteered to serve as translators, and the landlord of the apartment complex provided a place to conduct testing.

The event was replicated in a nearby apartment complex 10 days later. After the events, community members began accessing additional medical services.

COVID-19 vaccine questions and no answers in refugee languages

At the end of 2020, Keeley and Svaty’s neighbors shared that their employers were asking them about their interest in receiving a COVID-19 vaccine. The neighbors had many questions and needed answers in their own languages.

“They were telling us about all kinds of fears and rumors that were not different from what we were hearing from our English-speaking patients. They were wondering if it was safe. The majority are Muslim, and they wanted to know if the vaccine contained pork,” said Svaty.

The providers were eager to assist their neighbors, who had welcomed them into their community and shared their food, traditions, and stories of resilience.

“Refugee communities bring a cultural richness and diversity to our city. There are over 30 languages spoken in Southwest Kansas, delicious African food, Vietnamese restaurants, and so much more,” said Keeley. “They are hard workers who contribute a lot to the city’s economy.”

After a brainstorming session, the providers initially planned to record from their living rooms a short video in Somali, using their smartphones and the help of multilingual friends. They planned to use the WhatsApp communication platform for dissemination. But then the community stood up once more.

When the providers shared their idea with friends from refugee communities, they felt uncomfortable about appearing on camera. Many said they had never done anything similar before, but they took on the task because of their strong sense of community. Many asked friends who spoke other languages to participate and others provided ideas and resources. One video in Somali quickly turned into 14 videos in a variety of local languages. A friend offered his amateur videotaping services. People offered locations for taping.

Their friends created and translated flyers with information on how to register for vaccination and steps to use a QR code to access a video in their preferred language. Videos were disseminated through WhatsApp and posted on the new YouTube Channel, “It’s a beautiful day in our neighborhood.”

“Erin and I are not IT gurus or videographers and a YouTube channel was new for us, but we just felt this was important and valuable and worth creating,” said Svaty. Keeley went to the internet to learn how to create a QR code while Svaty created the YouTube channel.

Within a couple of days, the videos had been seen by hundreds of people. “We have a small community so for us 100 views are significant,” said Keeley. “We realized this was more effective than one-on-one conversations.”

Volunteers reported that they felt valued. They felt that their questions and languages mattered. They helped put up flyers about COVID-19 vaccination around town in minority stores, restaurants, clinics, and other sites.

“This was a grassroots effort. As local healthcare providers, we went to the CDC website, gathered information, and didn’t use certified translators. Many of the people who served as translators work at meatpacking plants,” said Svaty.

In one video, Svaty answers questions in Spanish and shares her vaccination experience. The neighbor who translated in Swahili took her children to the taping. She and Keeley provide COVID-19 vaccine information while cradling the kids. Through the video project, the providers highlighted their friends’ transformations from shy volunteers to health advocates.

“The lady that served as the Somali interpreter is really amazing,” said Keeley. “She is a stay-at-home mom and we have seen her grow from being nervous about the vaccine to feeling confident and becoming one of our strongest health advocates. One day she called me while I was in clinic and asked me to talk with her cousin in Kuwait who was pregnant. She was telling her cousin she should get the vaccine. She is now an empowered advocate who helps friends and family across the globe and reminds them not to believe everything they read on the internet.