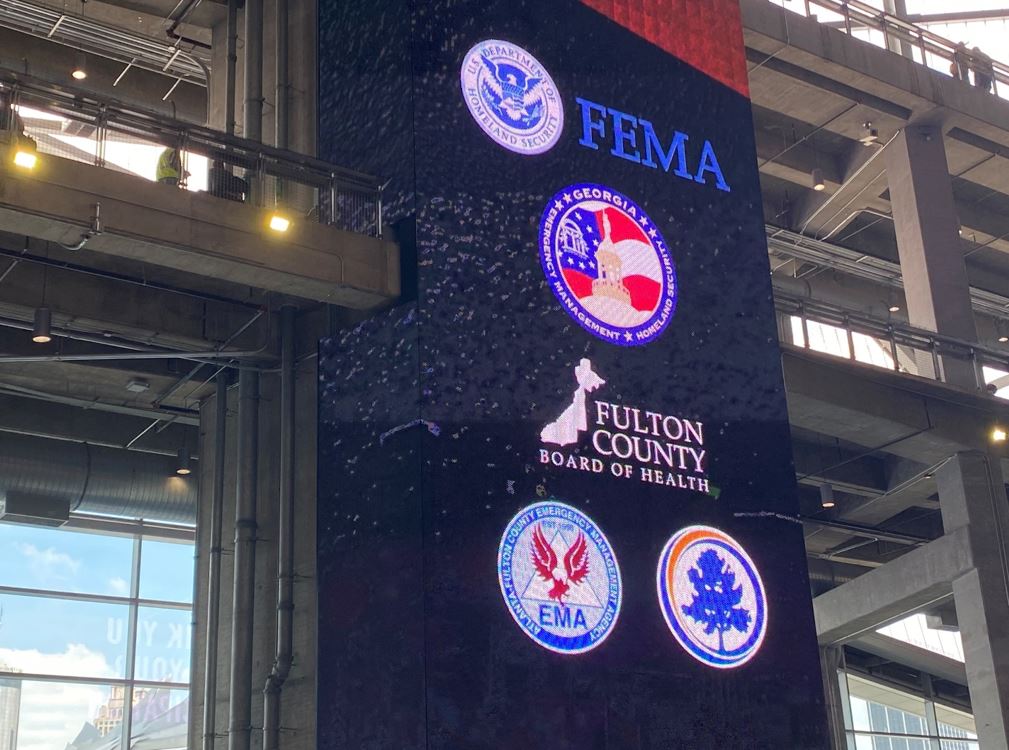 Fulton County initially signed a 90-day contract with MBS in January, but the stadium remained open for vaccination until early June. “When we first opened, we thought we would be vaccinating 50–75 firefighters a day. It is almost inconceivable to think of now and makes me laugh out loud,” said Corinna Hansen, senior emergency preparedness officer with the Fulton County Board of Health.

“The idea was to find a place where firefighters, public safety officers, and potentially healthcare workers could be vaccinated over the course of a couple of months,” Hansen said.

Hansen said when the site converted to a federally supported Community Vaccination Center in March, the goal was to vaccinate up to 42,000 people a week—quite an increase from where they started in January.

By the beginning of April, workers at the site were administering 10,780 vaccines each day. On April 28, they vaccinated 12,726 people with more than 3,000 walk-ups, setting a single- day nationwide record for a federally supported community vaccination center. When all was said and done, 300,452 vaccines were administered at MBS by the time it closed in early June. 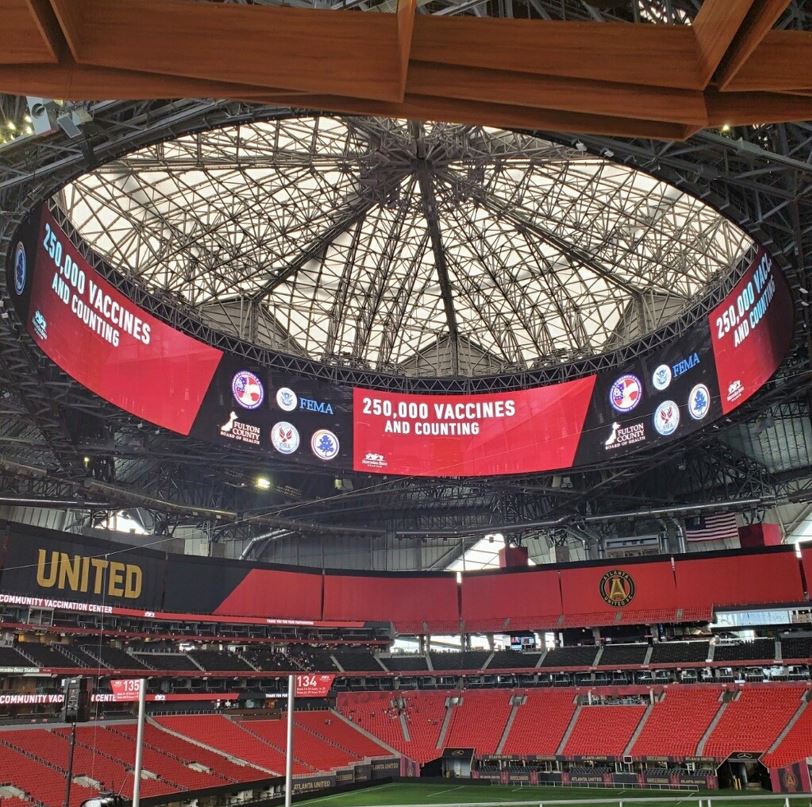 Over 300,000 doses of vaccine were administered at the MBS Community Vaccination Center in Atlanta.

Much of the Community Vaccination Center’s success came from the positive experience people had when they were vaccinated. Visits were carefully orchestrated from the second patients arrived to the minute they left the vaccination site. Staff scanned appointment confirmation QR codes from patients’ phones. Inside, staff directed patients to the appropriate area for their vaccinations, usually the area with the shortest line. On any given day, as many as six points of distribution (PODs) could be activated, each with more than 20 vaccinators plus additional clinicians preparing vaccines. After getting their vaccine, patients went to an area where they were asked to wait at least 15 minutes to make sure they didn’t have a reaction.

“Having the benefit of stadium staff was a tremendous help because they knew how to move people. They were constantly watching the one thousand or so cameras,” Hansen explained. “If one POD got backed up, they directed people to a different POD within the stadium. That way we kept the volume controlled, and kept people moving.”

The operation wasn’t always so smooth. In the beginning, the vaccination site was at field level, and it was only accessible through the loading dock far from the public entrances to the stadium. Hansen said, “Getting there felt like a mile-long walk.”

Site planners initially intended the stadium to be used for vaccinating firefighters.

“The location was selected more for its convenience in parking fire trucks and other large vehicles and less with public accessibility in mind,” explained Hansen. “When seniors and the general public began to arrive at the site, we heard a lot of complaints about the long walk and lack of accessibility.”

Sheena Haynes, the director of communications for the Fulton County Board of Health, took the issue of access to heart.

“It broke my heart when I saw people with mobility issues and other challenges having difficulty walking from the parking deck to the lower level of the stadium (where vaccine was being administered),” Haynes said. “Once staff noticed this, they immediately began using golf carts to take people to the stadium and back to their cars so they wouldn’t have to walk so far.”

Staff worked hard to ensure anyone who clearly needed assistance received it, and they quickly responded to concerns.  The next week they moved the vaccination site to the 100-level concourse, where the public usually enters the stadium, to make it more convenient and easier for people with mobility issues. The main concourse also was ADA-accessible.

Leveraging the Medical Reserve Corps and Other Volunteers 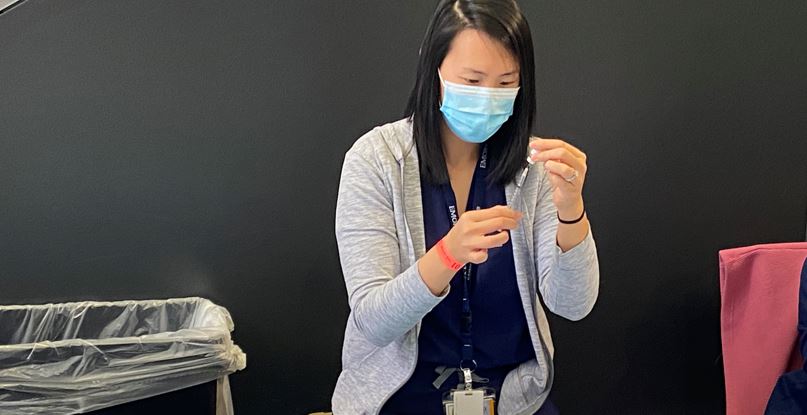 The Fulton County Medical Reserve Corps (MRC) is a group of community volunteers with clinical and nonclinical backgrounds. The county’s MRC played a critical role in surge staffing throughout the pandemic. MRC volunteers supported the Fulton County Board of Health at its COVID-19 testing sites and later at vaccination sites. Volunteers served in many roles, including greeters, registration assistants, and vaccinators.

“MRC volunteers have been incredibly committed throughout the response,” explained Hansen. “When volunteer shifts are posted on Fridays, they are usually claimed within 10 minutes.”

Leveraging both clinical and nonclinical volunteers was huge for the county’s vaccination efforts, especially when you consider the staffing cost saved.

In a 4-week period starting in mid-January, more than 1,600 new volunteers signed up for the Fulton County MRC, an average of more than 400 people per week. Volunteers enlisted family, friends, and neighbors who were inspired to help their community and finally get out of their homes.

Many volunteers remarked on how powerful it was to hear stories about how COVID-19 had affected the lives of people coming through the vaccination site and how relieved and thankful people were to finally get vaccinated. COVID-19 has provided incredible lessons in public health practice, communication, and partnerships that the MRC plans to carry forward in improving public health in Fulton County through health screenings, outreach efforts, and continued and new partnerships.

Every Day Was an Opportunity to Improve 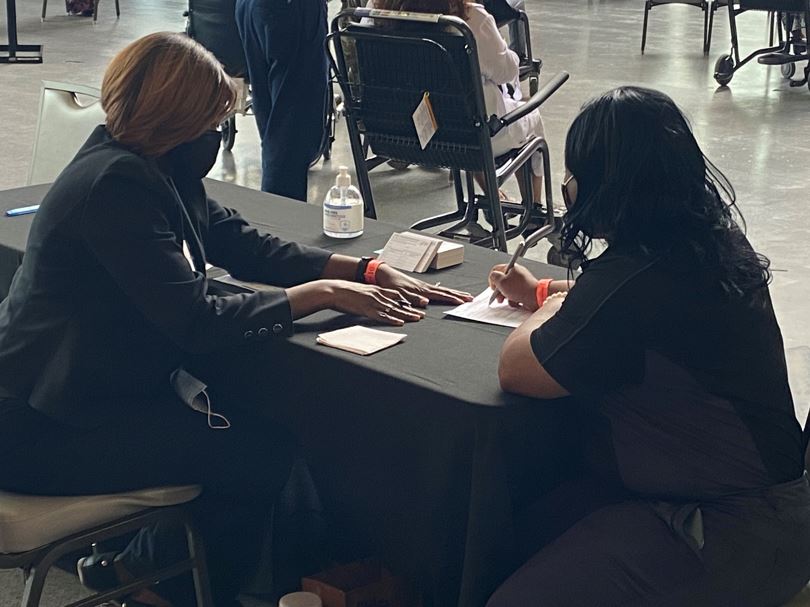 Checking in at the MBS Community Vaccination Center in Atlanta.

MBS and Fulton County staff were always looking for ways to improve the experience for people getting vaccinated.

For Haynes, the first lesson was to “embrace technology,” such as using tablets and QR codes to check people in for their vaccination. The experience also reminded her how important it is to listen. “You have to know what people are saying about you and take that information, learn from it and use it, and make the customer’s experience better,” Haynes said.

“You have to allow yourself to make mistakes and then learn from those mistakes,” Hansen said. “We constantly evaluated and brought to our planning team challenges, we thought through them as a group and then came up with ways to solve them.”

Now that their work at MBS is complete, Hansen was asked if another pandemic were to strike would she be prepared to step back into her emergency role. She replied, “I can say I’m hoping this is the biggest thing I ever work on….I thought Ebola was the biggest thing we were ever going to deal with, so may there never be anything bigger than this.”