Information on Hemophilia for Women

Hemophilia is caused by a problem in one of the genes that tells the body to make the clotting factors needed to form a blood clot. These genes are located on the X chromosome. All males have one X and one Y chromosome (XY) and all females have two X chromosomes (XX). 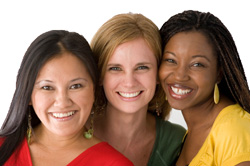 Females who carry the hemophilia gene and have any symptoms of the disorder should be checked and cared for by a health care provider. Good quality medical care from doctors and nurses who know a lot about the disorder can help prevent some serious problems. This type of specialty care can be found at a comprehensive hemophilia treatment center (HTC). An HTC provides care to those with hemophilia to address all issues related to the disorder, as well as education about the disorder. The team consists of doctors (hematologists or blood specialists), nurses, social workers, physical therapists, and other health care providers, all of whom are specialized in the care of people with bleeding disorders.

Learn more about the inheritance pattern for hemophilia 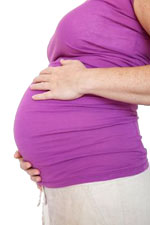 It is important for the woman’s health care providers to be aware of her carrier status so that plans can be made for a safe delivery. If the woman is receiving care at an HTC, those doctors and nurses should be involved and work closely with the woman’s doctor who is delivering the baby. Working together in this way will help the doctor who is delivering the baby take special safety measures to avoid injury to the child. These safety measures include not using forceps or vacuum extractor to assist in the delivery of the baby, if possible.

If the mother is a hemophilia carrier, there is a chance that the baby will be born with hemophilia. In families with a known history of hemophilia, or in those with a prenatal genetic diagnosis of hemophilia, one can plan special testing for hemophilia before the baby’s delivery. Instead of a venipuncture, a sample of blood can be drawn from the umbilical cord (which connects the mother and baby before birth) and tested for clotting factor levels. In normal newborns, factor VIII levels are similar to adult normal values and low levels indicate hemophilia. However, levels of factor IX, a vitamin K dependent factor, may be low at birth and reach adult values by 6 months of age. Blood testing also can be done soon after a male baby is born. It is important to know as soon as possible after birth whether a baby has hemophilia so that special steps can be taken to prevent bleeding complications for the baby.

Some babies should be tested for hemophilia soon after birth, including:

Cord blood can be used to test for clotting proteins. This should be repeated when the baby is 6 months of age to confirm the diagnosis of hemophilia

Learn more about testing and diagnosis

Some parents choose to have their baby boys circumcised (removing the foreskin from the penis). Bleeding from circumcision is the most common cause of bleeding among babies with hemophilia. It can occur days after the procedure is done and, for babies who have not been diagnosed already, often leads to the initial hemophilia diagnosis.

In the baby who may have hemophilia, avoid circumcision if possible. However, if circumcision is done, then a pediatric hematologist (a doctor who specializes in blood) should be consulted before the procedure to ensure that the child receives proper treatment to prevent excessive bleeding.

Bleeding of the Head

The head is the second most common place of bleeding among babies affected by hemophilia. Because the head is squeezed when the baby goes through the birth canal, bleeding of the head can occur. Also, when forceps or vacuum extractor is applied to the baby’s head to assist with the delivery and help pull the baby out, bleeding can occur. Head bleeding can be in the scalp or into the brain, which is very serious. The signs and symptoms of bleeding into the brain in the newborn baby are very nonspecific and can be difficult to diagnose. Once it is diagnosed, bleeding in the head needs to be treated immediately with clotting factor concentrates. Without treatment to stop it, the bleeding can be life threatening and can result in long-term brain damage.