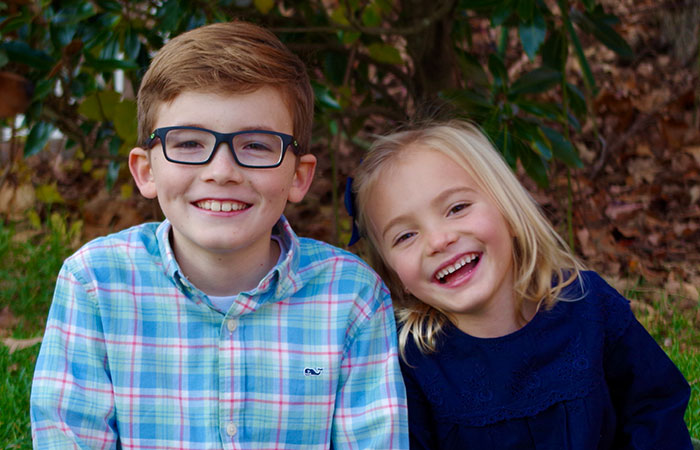 Carrie is no stranger to hemophilia. Her father has severe hemophilia B (factor IX [9] deficiency) and she grew up watching her father experience joint bleeds and receive treatment at the Hemophilia Treatment Center (HTC) at his local hospital and at home. “It was challenging, but as a child you don’t know any different. [Hemophilia] is your normal. This is what your dad does. I had a father who never was able to run and play with us, he was never able to kneel down and give us a bath when we were kids.”

Carrie also has mild hemophilia B and was diagnosed when she was about 23 years old. Her diagnosis wasn’t as much of a surprise as it was validation for the symptoms she experienced in her life until that point. At the time she thought, “Oh this all makes sense now. The fact that I bruise so easily, the fact that I had issues during my [menstrual] cycles, things that I didn’t see as being issues, I just thought that was normal. So, it was very much validation and put pieces together that I hadn’t realized weren’t cohesive.”

Carrie knew that hemophilia is genetic (passed down through the genes from parent to child), and it was possible that her children could inherit it (receive the gene for hemophilia) as well. When she was pregnant with her first child, a boy named Nicholas, she had the option to undergo testing to see if he would have hemophilia and decided against it. The test would be easier to perform after he was born, and nothing would have changed if she knew earlier rather than later. She gave birth on a Sunday at a local hospital that did not have an HTC. She remembers how upset she was that there was confusion around whether a blood sample from Nicholas could and would be sent out for genetic testing the same day. Ultimately, everything was handled, and Carrie was able to confirm that the lab received the sample the next day.

The day after that, Carrie was allowed to return home from the hospital. When she was putting Nicholas in the car, a nurse handed her a piece of paper and said that it had her name on it. It was his test results. “It said plain as day, less than 1% factor IX (9)1,” she remembers. Carrie knew that hemophilia treatments had advanced substantially since she was young, and that her father was now living a more normal life, yet Nicholas’ results still took her breath away. However, she was determined not to let his diagnosis define his life.

The first years of Nicholas’ life were great.  He was a “cautious risk taker.” He wore knee pads to avoid bruises when he was learning to crawl and also wore a “comfy cap” (a protective helmet for children). Nicholas stopped using the comfy cap as soon as possible because Carrie and her husband, Mark, learned that he was using it to his advantage. “He had this false sense of security because he would literally crawl under our table and use his head to move chairs!” He had his first joint bleed when he was 11 months old and they began prophylaxis treatment (using medicine to prevent bleeds before they can happen) shortly after that.

Now Nicholas is 11 years old and Carrie and Mark have always instilled in Nicholas that hemophilia isn’t a limitation. Carrie says to him, “Hemophilia is part of your life, it isn’t all of your life. This is a component of it. This little thing called hemophilia doesn’t get to hold you back.” The funny thing is that hemophilia is a very big part of Carrie’s life, as she, her son, and her father all have hemophilia. But having his grandfather as a generational example has helped Nicholas learn a lot about hemophilia. “He has seen my father infuse (inject his medicine through a vein in his arm). He has sat beside him and talked to him about it. He has this living, breathing example of an adult who [receives treatment] on a regular basis. So, we’re fortunate with that.”

Nevertheless, Carrie and her husband try to live as normal of a life as possible for Nicholas and his younger sister, Aleesia. Nicholas plays competitive baseball and enjoys swimming and playing golf. He has also attended a summer camp called Hole in the Wall Gang Camp,external icon which is specifically for children with bleeding disorders and other rare illnesses. This specialized camp offers the same fun, outdoor experiences as other summer camps but with full-time medical staff to serve children with different illnesses. Carrie describes Nicholas as a generally “even-keeled kid,” but when he talks about camp, he lights up and loves sharing detailed stories from his times there.

Carrie encourages other parents of children with a bleeding disorder to remember that, “It’s all going to be ok.” It can be difficult for any parent to fight the urge to shield your child from any and all accidents, and there is added fear when your child has a bleeding disorder. But Carrie says that fighting that urge is important, and she shares this advice for other parents of children with a bleeding disorder, “Give kids space, let them experience life, let them fall [and] hurt their knees. Let them do that so they learn [to be resilient]. It does not serve Nicholas [if I’m] always there to pick him up when he falls, he has to learn what to do to get himself back up.”

CDC thanks Carrie for sharing her and Nicholas’ story.

1 Less than 1% of factor IX (9) in the blood indicates a severe form of hemophilia B.