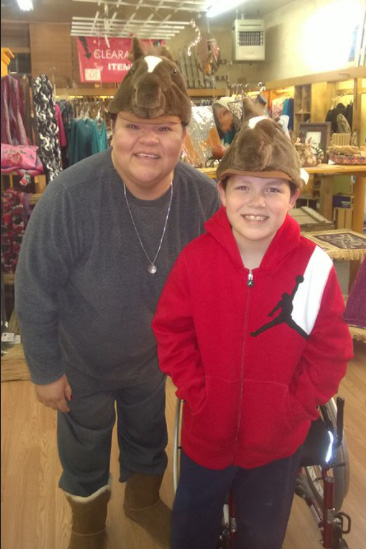 Caeleb came into the world, not kicking and screaming, but sleeping, using every ounce of energy to breathe on his own… he fought like a warrior. Perhaps his little body knew what was in store for him. Shortly after his birth while in the Neonatal Intensive Care Unit (NICU) we were given the diagnosis that Caeleb, like his brother has severe hemophilia A. This type of hemophilia is caused by a lack or decrease of clotting factor VIII (“factor eight”).

Like anyone else with hemophilia, Caeleb started showing signs of his bleeding disorder with bruises and bumps. He was circumcised at 11 months and just would not stop bleeding. The doctor’s diagnosed Caeleb with a high titer inhibitor, which is an antibody that does not allow the factor to work to stop bleeding. His brother also had an inhibitor at the same age.

During Caeleb’s second grade year he missed over 50 days of school due to complications from his inhibitor. He spent Halloween, Christmas and his birthday in the hospital and he spent a year in a wheelchair. It was a series of months that passed by in one big blur.

Throughout his course of treatment Caeleb developed infections in his port (devices that are surgically placed under the skin of the chest and connected directly into a large vein in the upper chest for infusions of clotting factor) and he would often have to be hospitalized for antibiotics infused through his port or through a vein. Infections and other complications sometimes require replacement of the port with a new one. He is now on port #6 and it is working beautifully.

Despite having developed two joints into which he often bleeds, called target joints (knee and ankle), Caeleb is getting around very well. He wants to go to hemophilia camp this summer and he no longer needs his wheelchair. He swims twice a week, keeps up with his friends at school and church, and is happier than ever. He is still taking his allergy shots every two weeks and his body is no longer rejecting factor VIII, so the treatment products are working again as they should.

Caeleb’s story has a great result (as of today), but developing an inhibitor is a devastating complication for those with hemophilia. Once you have had an inhibitor it can always come back. We have to live for each moment and not live in fear. I refuse to let hemophilia take our joy away.

CDC would like to thank Cazandra and her family for sharing this personal story.