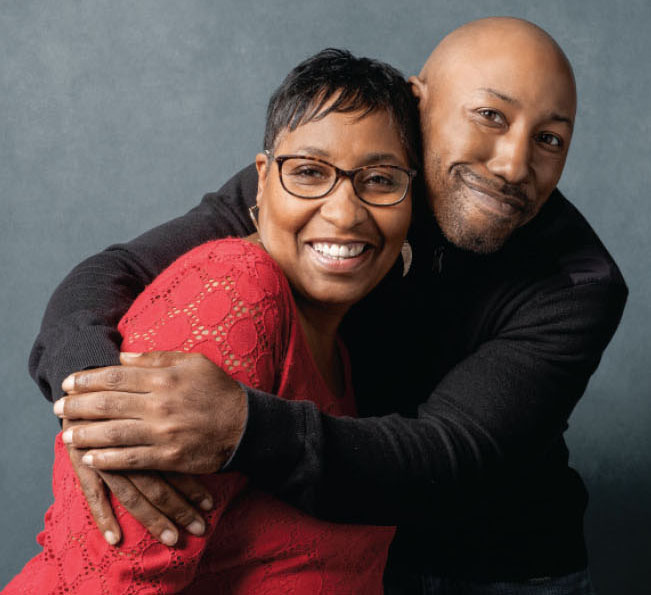 Hemophilia runs in Renita Hickman-Johnson’s family. Two of her brothers had severe hemophilia and she is a hemophilia carrier. Before having children, Renita knew that there was a chance her future children could have hemophilia, but she didn’t let that stop her from having the family she always wanted. Given her family history, the news of her son Edwin’s hemophilia diagnosis shortly after he was born did not come as a surprise and was made easier by the fact that she was already familiar with the symptoms of hemophilia, treatment regimens, and the local Hemophilia Treatment Center at Mount Sinai.

Despite how much she knew about hemophilia already, having a child with a bleeding disorder was still scary. The toughest moment for Renita was Edwin’s first bleed, which occurred when he was about 7 to 8 months old. “He may have hit his gums on the crib at night and the next morning I got up and he was lying in a pool of blood,” Renita recalled. It became more real for her in that moment. She immediately took him to the hospital and the medicine took hours to take effect and for his bleeding to stop. Although it was a frightening experience, it also gave Renita the strength to support and care for Edwin. “That was really tough for me. I think that I became this champion after going through it. He was fine, I knew what to do, and I had all the support I needed from that very first day. I thought, ‘I can do this. I have to. I don’t have a choice.’”

When Edwin was a child, it was easier for Renita to manage and care for his visible bleeds, like when he would lose a tooth or trip and fall. The bleeds she couldn’t see were harder to manage. “The internal bleeds (bleeding inside the body) were the worst because of the pain he suffered.” Edwin developed a target joint (repeated bleeding into the same joint or joints) in his right ankle, which was not only painful, but also prompted many trips and overnight visits to the hospital. As Edwin got older, he was more active, and it became more challenging to protect him and manage his bleeds. He wouldn’t tell Renita when he was having mild pain because, like all children, he wanted to feel normal. “He wouldn’t tell me that he had twisted his ankle, or that it was hurting just a little bit… [he would wait until his ankle] had gotten so swollen and he was in so much pain that he couldn’t bear it and had to tell me, and we would have to go to the emergency room.”

Thankfully, Renita and Edwin had support. Renita has a big family who lived nearby and always had someone to care for Edwin’s younger sister when she would take Edwin to doctor visits or to the hospital. Edwin and Renita were 50 miles away from Mount Sinai Hospital, where Edwin received treatment, so they were provided an on-call cab to transport him and other patients to and from the hospital.

When Edwin was around 11 years old, his doctors encouraged Renita to try infusing (injecting) his medication herself. They were both nervous to try this, but Edwin was willing to let his mother try under one condition: “If you infuse me one time and don’t hit the vein, you can’t do it a second time.” Renita attended several trainings to learn how to give Edwin his medication, and, at Edwin’s next bleed, she was successful on the first try. This was a big relief for both of them as she could now infuse him immediately at the first signs of pain, instead of having to trek to the hospital. Being able to infuse at home significantly reduced the damage to his joints because the sooner she could infuse him, the better it would be for the joint to heal. At age 13, Edwin started giving himself his own medicine, a process called self-infusion, and has been doing so ever since. In fact, Edwin even helped teach other boys younger than him how to self-infuse. He was grateful to be able to give back and help other kids.

Now, Edwin is an adult and has two children of his own, a boy and a girl. Renita continues to be involved with her community and is a big supporter of hemophilia and bleeding disorder-related causes. She is involved with her local hemophilia chapter and was a member of the board of directors for approximately two years. She is also helping plan the parent/caregiver educational sessions at the National Hemophilia Foundation’s annual Bleeding Disorders Conference. Renita has attended several “Legislation Days,” where she has met national and local government representatives to encourage and promote standards of care and medication options for bleeding disorders. She urges others in the hemophilia community to get involved with outreach education and express their support for policies, medication, and standards of care that improve life for people with hemophilia. Renita advises, “Use your voice and speak up for your needs.”

Edwin’s son does not have hemophilia, but his daughter is a carrier, and Renita brings her to as many bleeding disorder events as possible. “I really want to educate her on her father’s condition because who knows, one day she may have a son [with hemophilia] because she is a carrier.”

Renita’s advice to other parents and caregivers of children with bleeding disorders is to be aware of potential mental health issues and to take an active role in the bleeding disorders community themselves. “Edwin would ask, ‘Why me?’ And I said, ‘God has a story for you to tell. You are healthy, you are smart, and you have something to give… somebody out here will hear what you have to say and is going through the same thing, so it’s ok for you to share it.’”

CDC thanks Renita for sharing her story.