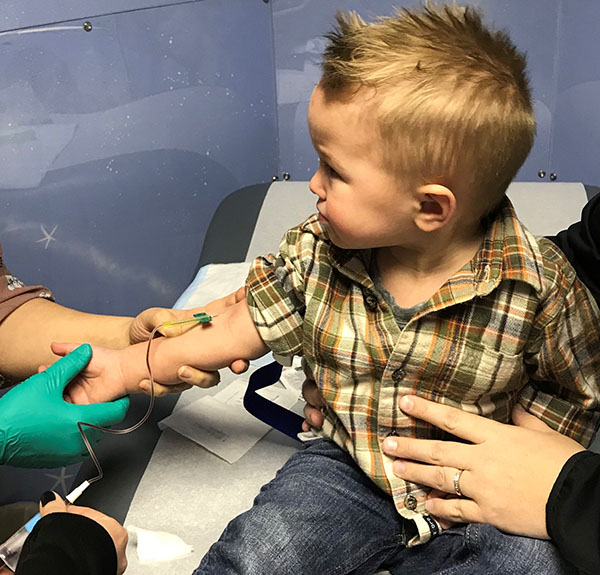 My family’s history with hemophilia started years before I was born, with my grandfather. When he was alive, there was a lack of education, treatment options, and general understanding of the disorder. Everyone in our small area had heard he was “different,” but many did not understand his condition. The truth was he had severe hemophilia B, one of the two most common types of hemophilia. I had a handful of other family members that have also lived with hemophilia B—and are still living to this day—but everything changed for my family in 2017 when my son Jackson was born. He was a perfectly healthy baby boy, but he has severe hemophilia B.

During the first few months of Jackson’s life, things were as they were with any infant, filled with sleeping (for the baby!), diaper changes, and bottles. It wasn’t until he was 10 months old that life threw a curveball at him. A muscle bleed, a butt bleed (learning to walk is hard!), another muscle bleed, and a pinched finger, all of which led us to numerous unplanned trips to a Hemophilia Treatment Center (HTC). By this point, Jackson was toddling all over and into everything, with no signs of slowing down. With the Western New York winter gradually approaching, we and Jackson’s team of doctors made the choice to treat his hemophilia proactively. The transition to treating prophylactically (preventing bleeds before they can happen) was smooth, other than the 4-hour round-trip drive to the HTC. Making this weekly trip was difficult for the family, but it was the best option for Jackson because locating a vein on a small toddler is not easy. The nurses were phenomenal and taught me how to infuse (inject his treatment products, called clotting factor concentrates or “factor” for short) at home.

One would think that once you are treated prophylactically you are able to avoid future setbacks.  Wrong! Not in the life of a person with hemophilia. There are still times when you need to drop everything to head to the emergency room (ER) to seek treatment. Luckily, the HTC team is on call 24 hours a day, 7 days a week, 365 days a year, even during holidays! Living in a rural area where hemophilia is uncommon and there is a lack of knowledge of bleeding disorders makes seeking care difficult. Therefore, when we need to head to the ER, we call not only the HTC but also the pediatrician and the ER to give them our estimated arrival time. As a parent without a medical degree, it can be difficult to get doctors to listen to you; however, as a mother who has a “Master’s degree” in hemophilia and a team of medical professionals to back me up, we get to educate those involved in Jackson’s care together. 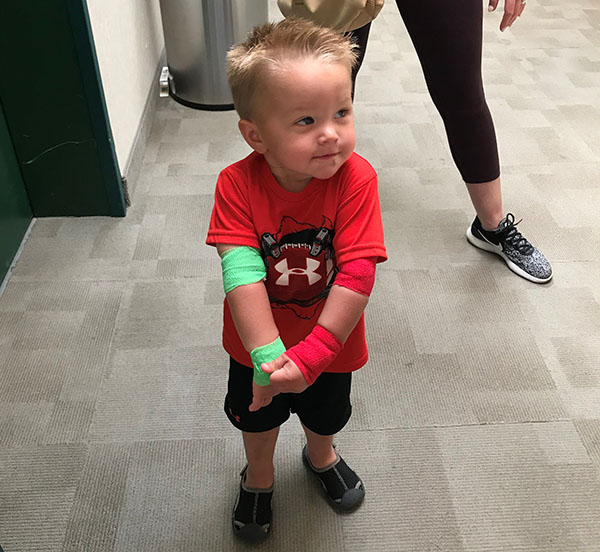 We have been very lucky with Jackson. Being “lucky” includes one round of stitches, a couple of ER visits for CAT scans (a type of X-ray test that takes pictures of internal body parts), and a handful of extra infusions for bumps on the head. There are still days when he jumps and dives or slides across the floor playing with his monster trucks and cars that I cringe, especially as we near factor day and his clotting factor levels (level of proteins in the blood that help control bleeding) are low. We are currently infusing at home regularly, rather than traveling to the HTC. Knowing I can help ease his pain or save his life myself is comforting, but also stressful. What if I can’t hit the vein? What if we don’t have enough factor? What if the CAT scan was wrong and he is bleeding internally? These are all frequent questions that run through my mind because life as a parent of a child with severe hemophilia is not for the faint of heart. We experience it all, the good and the bad, from frequent nose bleeds, bulging hematomas (when an injury causes blood to collect and pool under the skin), and bruises all over to big hugs and lots of laughter just like any other child. Hemophilia does not define us; we are resilient!

CDC thanks Ashley for sharing her story.