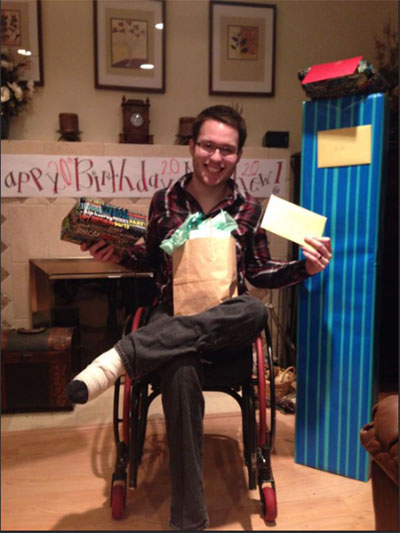 Matthew was born normally, with no complications. We knew he would have hemophilia and that was confirmed at birth, but he experienced no bleeds and required no treatment until he had an elective surgery at six months to correct a foot defect. During that surgery he had a device called a central line, placed in his vein to deliver his first doses of clotting factor. The plan was that we would begin routine preventative treatment, called prophylaxis, to reduce the number of bleeds that Matthew might eventually have; but within a week he developed an antibody—called an inhibitor—to the clotting factor treatments used to manage hemophilia.

We had been told nothing about inhibitors in all our previous talks with hematologists, Hemophilia Treatment Center (HTC) staff, and other families. Growing up in the hemophilia community, I had never met another person with an inhibitor. My father, who also had hemophilia, had always responded well to treatment and had even had several major surgeries that were successfully managed with plasma-derived clotting factors (clotting factors made from the proteins in the liquid part of the blood) until he contracted HIV in 1982. So to say the least, I was very upset and unprepared for my son’s diagnosis of an inhibitor.

Matt’s physicians told us not to worry, that the inhibitor should go away quickly, but it didn’t quite turn out that way. Even though we tried everything recommended to get rid of his inhibitor, nothing was helping. He began having bleeds. He had care from the top hematologists and inhibitor experts in the world. Several researchers were interested and tried to help. We tried to remain optimistic, but things just kept getting worse:

During this time I grew angry that no one had warned me that this could happen. Then in 2002, something went terribly wrong. Matthew started complaining about headaches. We took him to see several doctors. They told us he had a cold or a virus and tested his blood, everything looked fine. They suggested he take more pain medications, but his headaches were getting worse.

Suddenly one day, he couldn’t even sit up without crying in pain. Back to the HTC we went. This time he saw a different hematologist, someone who was in training. This doctor took a look at him, noticed his central line and said, “I think he might have a blood clot.” I thought, “No way, how stupid is this doctor, doesn’t he know that Matt has severe hemophilia and an inhibitor, his blood does NOT clot.”

We went for an ultrasound and a dye study of his veins, and low and behold – yes – Matthew had a large blood clot in a vein in his chest called the subclavian vein. It was above where his central line was threaded, so it wasn’t blocking his factor from being delivered, but it was blocking almost all of the blood flow from his head back to his heart. More studies followed and they found that he had also had an old blood clot in his other subclavian vein where another central line had been 4 years earlier. We learned that excess clotting (or thrombosis) was a risk with the by-passing medications he had been receiving that help the clotting factor work correctly when inhibitors are present—another thing we were not warned about.

Matt was in big trouble, with both subclavian veins blocked, no blood was circulating from his upper body back through his heart. Things went downhill quickly. He spent the next three months in Intensive Care fighting for his life. His upper body and head swelled from the backed up blood and fluid. He couldn’t breathe. He was in severe pain. He was so sick from all the pain medications and everything they were trying to do to clear the clots that he couldn’t eat – he vomited daily and didn’t eat anything for an entire month.

The doctors put him on blood thinners. He developed a retroperitoneal bleed (a bleed in his abdomen) that got so bad it blocked the urine flow out of his kidneys. They didn’t want to treat the bleed because it might make the blood clots worse – one kidney ruptured, then the other. He started urinating liters of blood. He had to have blood transfusions daily. Things just kept spiraling out of control.

Our family felt as if we were being ripped apart, both physically and emotionally. We were terrified. One day Matt’s vital signs crashed and they had to call a code blue. I wasn’t there that day, but the priest was called in. They were able to resuscitate him. When my husband called and told me what had happened, I just fell apart. Why had all of this happened? We did everything right and we followed all of our doctor’s orders. We were extremely careful, we were good parents. Why, Why, Why????

Eventually Matt did recover from that crisis. The blood clots never cleared, but he grew enough new veins for blood to travel through his body. To this day he still cannot lay flat or the blood backs up into his head. He still has an inhibitor to clotting factor and he bleeds frequently. He now is confined to a wheelchair due to the joint damage from repeated bleeding in his knees. He has had several major surgeries to stop bleeding in his joints and to try to relieve his pain. The costs of his medications, called by-passing agents, that are the only thing that can control his bleeds, are averaging $6 MILLION per year. We joke around and call him the 100 MILLION DOLLAR man, but we are very worried about the high cost of his treatment. This won’t change anytime soon unless something can be done to better manage his hemophilia or get rid of his inhibitor.

We have tried to make the best of the situation. Life goes on. Matt graduated from high school with good grades, and he is now in college. He has a girlfriend, he drives a car, and he has a job. He has coped amazingly well. He is a very intelligent, funny, and talented young man. I am thankful to have my amazing son, but I still ask myself almost every day, “Why did this have to happen?” Why weren’t we warned about these risks? Could we have done something differently? And “Why do so many others now seem to be forming inhibitors?”

CDC would like to thank Debbie and her family for sharing this personal story.