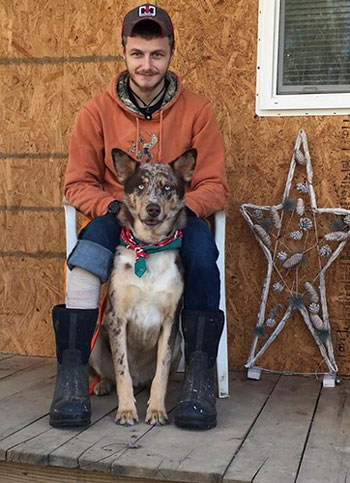 Alden knows the challenges of living with an inhibitor.

He doesn’t remember his exact age when he developed an inhibitor, but he knows it was at an early age. When Alden was younger, his inhibitor levels were so low that they were undetectable. He was treated with prophylaxis during this time and was able to play baseball. He occasionally had bleeding episodes, but he was able to manage and treat his bleeds. In middle school, his inhibitor levels spiked, and although Alden was having the same number of bleeds as before, his bleeds lasted longer and became harder to treat.

As an adult, Alden has faced challenges related to his condition. Inhibitors make his bleeds harder to treat, which make it challenging to work on the days he gets a bleed. “One day I’ll be at work and everything will be fine. The next day I won’t be able to come to work. It’s very stressful to stay busy and show an employer that you’re dedicated because physically it’s really hard.” Sometimes his bleeds will take days to treat, and he’ll have to miss work or else the bleeding can result in more damage to his joints. “Not all employers like to work with you when it comes to missing days, but in my case, luckily all the ones I’ve worked with have worked with me to an extent,” says Alden.

Despite these challenges, Alden remains positive. He thanks his family and his support communities for helping him weather times of difficulty and disappointment. When Alden’s parents learned he had severe hemophilia at 10 months of age, his parents have been advocates for his physical and emotional health. His parents decided not to raise him in a bubble because of his condition. Instead, they made it a priority to learn about hemophilia and to be active in the hemophilia community in their home state of Tennessee. They helped Alden find support groups by enrolling him every year into a camp for children with bleeding disorders, and as a family, they attended annual meetings hosted by the Tennessee Hemophilia Foundation.

For Alden, camp was a positive, life changing experience growing up, and it continues to be a source of support and encouragement. “Going to camp every year was always helpful. I met older guys at camp, and it opened my eyes. They showed me that once I learned my limits I could do anything I set my heart to. If I set my limits, I’ll know when to step back or how much to go,” says Alden.

As Alden got older, his parents gave him more responsibility to decide if he wanted to attend hemophilia conferences and meetings. “Around 15 or 16 years old, my parents started asking whether I wanted to go to the meetings instead of just taking me. They gave me that option. It really made me interested in trying to find something and wanting to attend,” says Alden. Since then, Alden has been actively involved in the hemophilia community in Tennessee. He hasn’t missed a year of camp since he began attending at eight years of age. He continues to attend various meetings hosted by the Tennessee Hemophilia Foundation, and he participates in the Foundation’s golf tournaments.

Today, Alden continues to thrive with support from his parents, his wife, and the friends he’s met through camps and meetings. He wants to encourage others with inhibitors to know they can live the lives they want to live. “Anything is possible. When I was younger and I first realized I had an inhibitor, I never thought I would be where I am today. Really get in with the community because there are support systems for siblings, parents, people with bleeding disorders – everything. The help that you get from that is tremendous. Be active in the community. It’s a blast. You’ll meet so many new people, and it expands the group of people you can connect with and be of support.”

CDC would like to thank Alden for sharing his story.