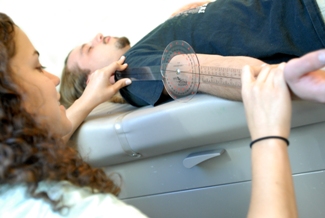 Hemophilia is a complex disorder. Good quality medical care from doctors and nurses who know a lot about the disorder can help people with hemophilia prevent some serious problems. Often the best choice for care is at a comprehensive hemophilia treatment center (HTC). An HTC provides patients with the care and education to address all issues related to the disorder. The team consists of physicians (hematologists or blood specialists), nurses, social workers, physical therapists, and other healthcare providers who are specialized in the care of people with bleeding disorders.

Find the HTC closest to you

The two main types of clotting factor concentrates available are:

Plasma is the liquid part of blood. It is pale yellow or straw-colored and contains proteins such as antibodies, albumin, and clotting factors. Several factor concentrate treatment products are available that are made from human plasma proteins. All blood and parts of blood, such as plasma, are routinely tested for viruses. The plasma is collected from many people, and then it goes through several processes to separate it into components, such as clotting factors. The clotting proteins are then made into a freeze-dried product, which is tested and treated to kill any potential viruses before it is packaged for use.

Until 1992, all factor replacement products were made from human plasma. In 1992, the U.S. Food and Drug Administration (FDA) approved recombinant factor VIII (8) concentrate, which does not come from human plasma. This concentrate is genetically engineered using DNA technology. Commercially prepared factor concentrates are treated to remove or inactivate bloodborne viruses. Additionally, recombinant factors VIII (8) and IX (9) do not contain any plasma or albumin, and therefore, cannot spread any bloodborne viruses.

Some people who infuse with clotting factor concentrates may develop an inhibitor. Inhibitors make it more difficult to stop a bleeding episode because they prevent the treatment from working.

Hemlibra® works by replacing the function of factor VIII (8), rather than replacing the missing clotting factor VIII directly. It can be used to either prevent or reduce the frequency of bleeding episodes in people with hemophilia A. This treatment product can be given by injection under the skin. Patients who use Hemlibra® for prophylaxis and use clotting factor concentrates to treat breakthrough bleeds, can still develop an inhibitor. Traditional laboratory inhibitor testing methods do not work when testing for inhibitors in patients on Hemlibra®; as such, a specialized testing method called the chromogenic Bethesda assay is needed.

DDAVP® and Stimate® are medications that are similar to a hormone that occurs naturally in the body. The medications release factor VIII (8) from where it is stored in the body tissues. For people with mild, as well as some cases of moderate, hemophilia, this can work to increase the persons own factor VIII (8) levels so that they do not have to use clotting factors to stop bleeding episodes. DDAVP® can be given through a vein and Stimate®.via a nasal spray.

Amicar® is a medication that can be given through a vein or by mouth (as a pill or a liquid). It prevents blood clots from breaking down, resulting in a firmer clot, and is often used for bleeding in the mouth or after a tooth has been removed because it blocks a substance found in the saliva (spit) that breaks down clots.

Cryoprecipitate is a substance that comes from thawing fresh frozen plasma. It is rich in factor VIII (8), and was commonly used to control serious bleeding in the past. However, because there is no method to kill viruses, such as HIV and hepatitis, in cryoprecipitate, it is no longer used as the current standard of treatment in the United States.

This documentary highlights the push for, and benefits of, comprehensive hemophilia care in the United States. The video features the HTC clinician pioneers from the Western, Mountain and Pacific Northwest States who initiated the – then radical – concept of team-based care.