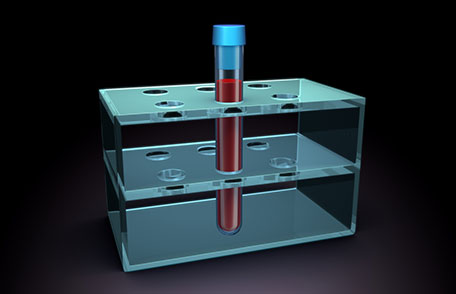 CDC’s Division of Blood Disorders is committed to reducing the occurrence of inhibitors. Find out what they are doing to reach their goal.

Centers for Disease Control and Prevention’s (CDC’s) Division of Blood Disorders (DBD) is committed to reducing the occurrence of inhibitors which are the most significant and costly complication affecting people with bleeding disorders like hemophilia and von Willebrand Disease (VWD).

In March 2012, DBD hosted the first Inhibitor Summit, a national meeting on inhibitors to discuss the urgent need for a system to monitor this serious complication of treatment. This discussion informed efforts by DBD to begin collecting and monitoring information on inhibitor development, treatment, and outcomes by building onto an existing healthcare monitoring system.

Nearly five years later, DBD held the Second Inhibitor Summit on January 30, 2017. This meeting of over 40 key stakeholders and subject matter experts evaluated the current state of patient enrollment in the system and how to improve accuracy and representativeness, discussed how inhibitors are currently being monitored, and generated ideas for how this monitoring system can be better used or improved to prevent inhibitors.

People with hemophilia, and many with VWD type 3, use treatment products called clotting factor concentrates (“factor”). These treatment products improve blood clotting, and they are used to stop or prevent a bleeding episode. When a person develops an inhibitor, the body stops accepting the factor treatment product as a normal part of blood. The body thinks the factor is a foreign substance and tries to destroy it with an inhibitor. The inhibitor keeps the treatment from working, which makes it more difficult to stop a bleeding episode. A person who develops an inhibitor will require special treatment until his or her body stops making inhibitors. Inhibitors most often appear during the first 50 times a person is treated with clotting factor concentrates, but they can appear at any time. In addition, it is estimated that 1 out of every 5 people with hemophilia will develop an inhibitor in their lifetimes.

Why are inhibitors an important area of study for CDC? 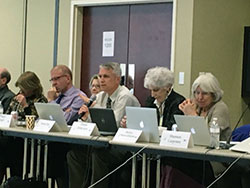 Summit participant, Dr. Steven Pipe, comments after one of the presentations. 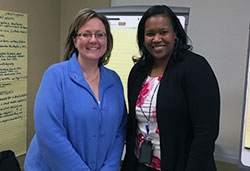 Kimberly Haugstad (HFA) and Vanessa Byams (CDC) pose for a photo during one of the breaks.

What is the system CDC uses to monitor inhibitors?

The system CDC uses to monitor inhibitors is called the Community Counts Registry for Bleeding Disorders Surveillance. This registry monitors the health of people who receive care at Hemophilia Treatment Centers (HTCs). It is funded by CDC through a cooperative agreement awarded to the American Thrombosis and Hemostasis Networkexternal icon in partnership with the U.S. Hemophilia Treatment Center Network. The program gathers and shares valuable information on a variety of health outcomes, including those related to inhibitors. For example, through the Registry, CDC can establish estimates of the number of participants with new and existing inhibitors, identify unexpected increases in how often inhibitors develop, and identify risks for inhibitor development.

What was the purpose of the Second Inhibitor Summit?

CDC held the meeting to discuss how inhibitors are currently being monitored and how this monitoring system can be better used or improved to prevent inhibitors.

The goals of the meeting were to

Who attended the Summit?

What does CDC want people with hemophilia or VWD type 3 to know?

CDC encourages people with hemophilia or VWD type 3 to