Design with the Other 90%: CITIES 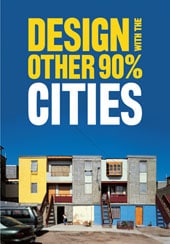 Design with the Other 90%: CITIES Incremental Housing:

For the first time in history, the majority of the earth’s approximately seven billion inhabitants live in cities. Close to one billion people live in informal settlements, commonly known as slums or squatter settlements, and that number is projected to swell to two billion by 2030, pushing beyond the capacity of many local institutions to cope.

Lured to the city in search of work and greater social mobility or fleeing conflicts and natural disasters, many urban migrants suffer from insecure land tenure, limited access to basic services such as sanitation and clean water, and crowded living conditions. At the same time, these informal cities, full of culture and life, increase opportunities to create solutions to the problems they face.

Design with the Other 90%: CITIES features sixty projects, proposals, and solutions that address the complex issues arising from the unprecedented rise of informal settlements in emerging and developing economies.

Divided into six themes—Exchange, Reveal, Adapt, Include, Prosper and Access—to help orient the visitor, the exhibition shines the spotlight on communities, designers, architects, and private, civic, and public organizations that are working together to formulate innovative approaches to urban planning, affordable housing, entrepreneurship, non-formal education, public health, and more.

Design with the Other 90%: CITIES is the second in a series of themed exhibitions that demonstrate how design can be a dynamic force in transforming and, in many cases, saving lives. The first exhibition, in 2007, Design for the Other 90%, focused on design solutions that addressed the most basic needs of the 90% of the world’s population not traditionally served by professional designers.

Design with the Other 90%: CITIES is sponsored by Citi.

Generous support is provided by The Rockefeller Foundation.