Be sure to join our live Newsletter Zoom on April 27, 2021, at 8pm ET, and check out all the activities (digital scavenger hunt—Goosechase, Zoom, social media challenge, and Ask a CDCer) at the end of each newsletter. Join in on the fun and win some prizes! Also, be on the lookout for the recently added activity, a pre-Zoom game (Kahoot) that will be emailed the day of the Zoom.

Did you know that there have been several outbreaks of measles and whooping cough in recent years? These diseases are extremely contagious and can be very serious, especially for babies and young children. As schools and daycares also begin to reopen, protecting children against these and other diseases makes these vaccinations particularly important.

Most parents choose to vaccinate their children according to the recommended schedule. But some parents may still have questions about vaccines, and getting answers they can trust may be hard.

With so much information—and sometimes incorrect information—available today, learning the facts before making health decisions is very important.

When a baby is born, their immune system is not fully developed, which can put them at greater risk for infections. There are some deadly diseases that they can’t handle. Vaccines reduce a child’s risk of infection by working with their body’s natural defenses to help safely develop immunity to disease.

All ingredients of vaccines play necessary roles either in making the vaccine, triggering the body to develop immunity, or in ensuring that the final product is safe and effective. Some of these include: 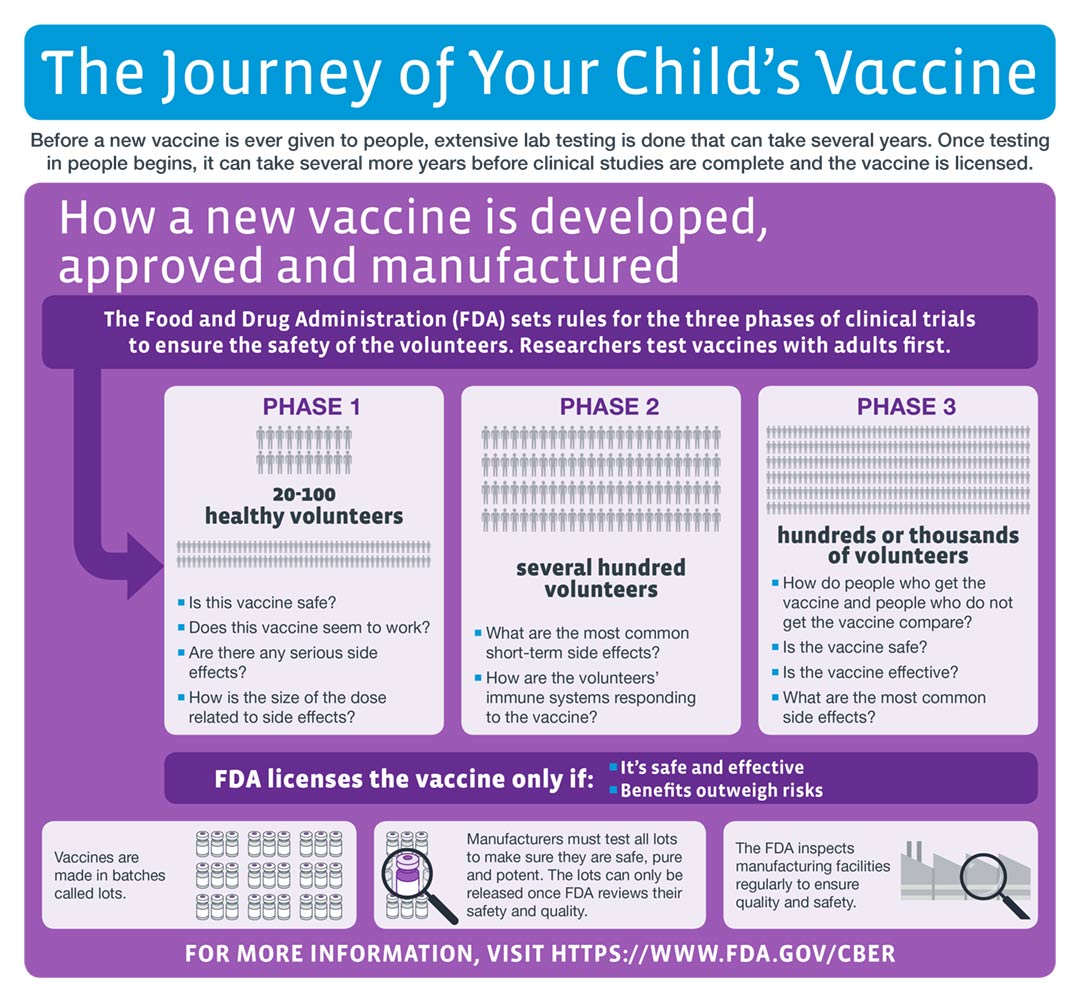 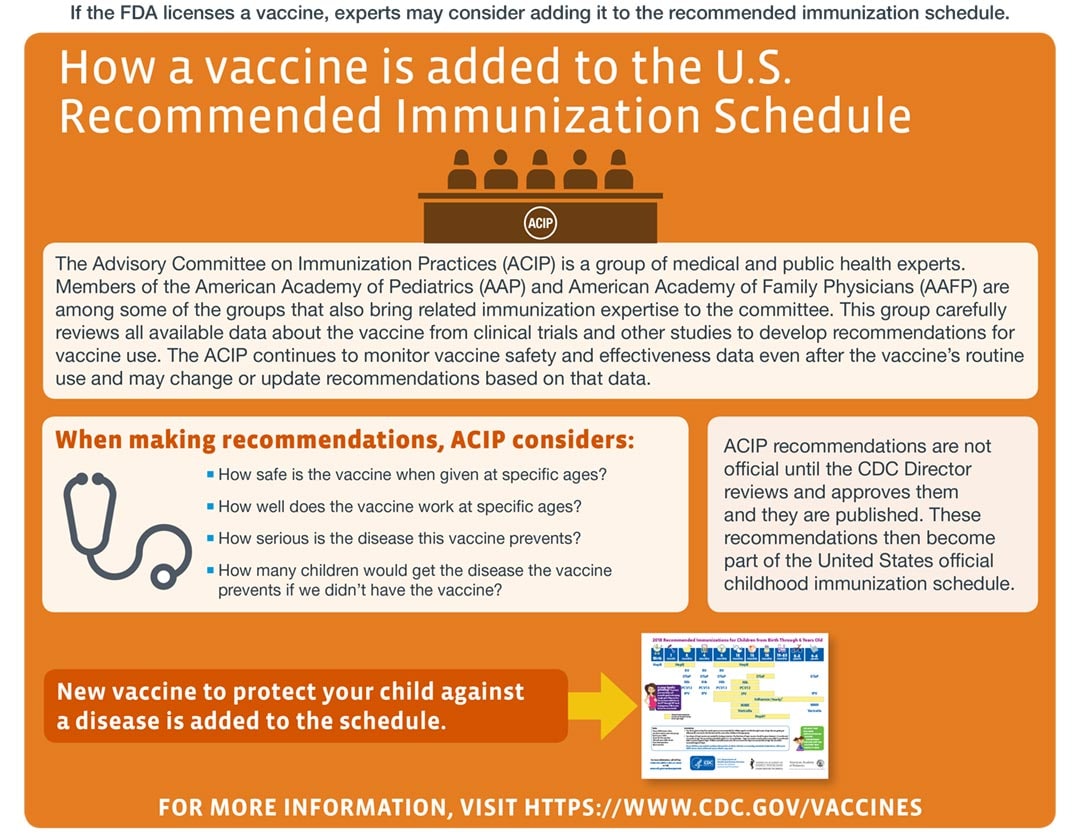 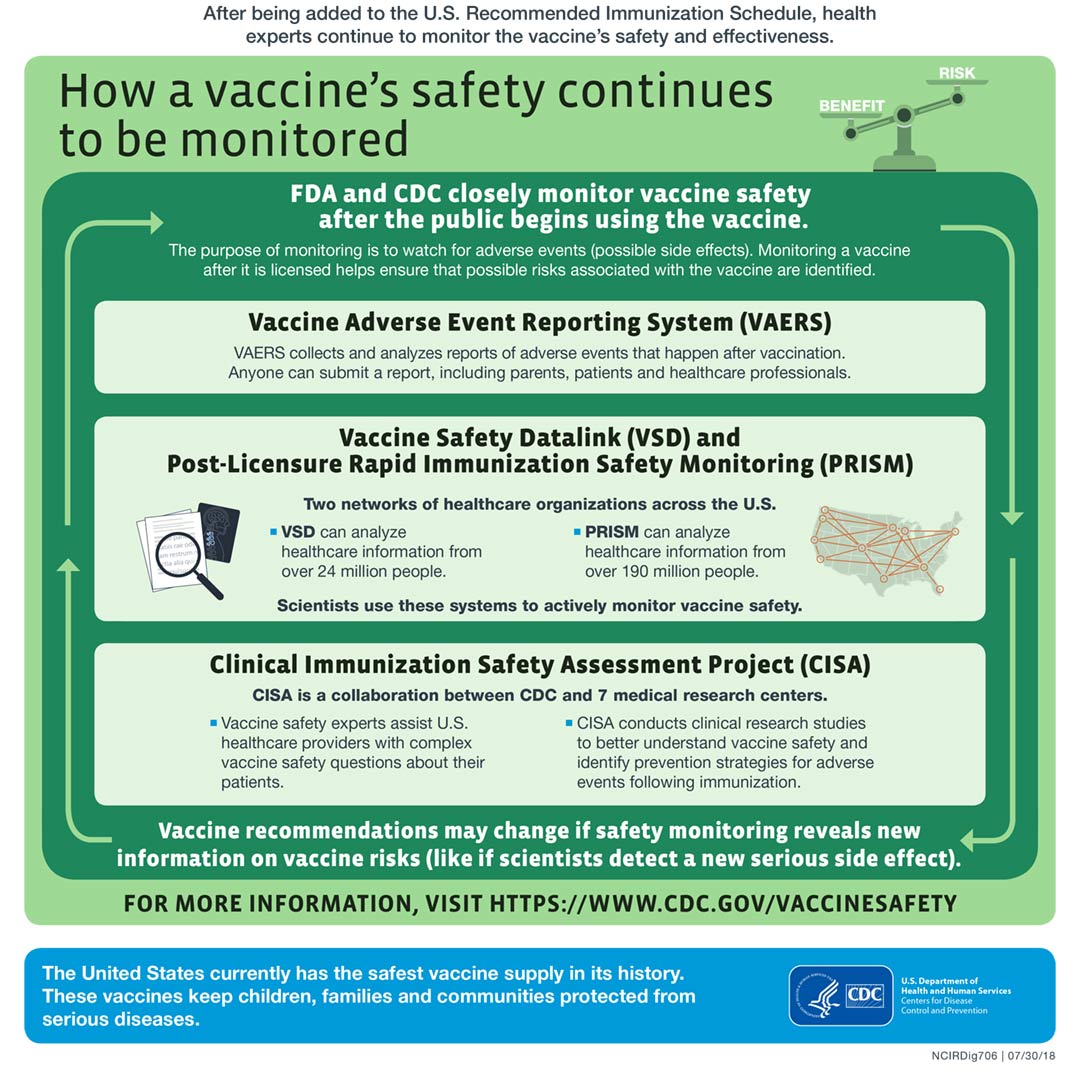 Following the recommended vaccine schedule provides children/teens with the best protection from potentially serious diseases. See below for the schedule for children ages 7–18. 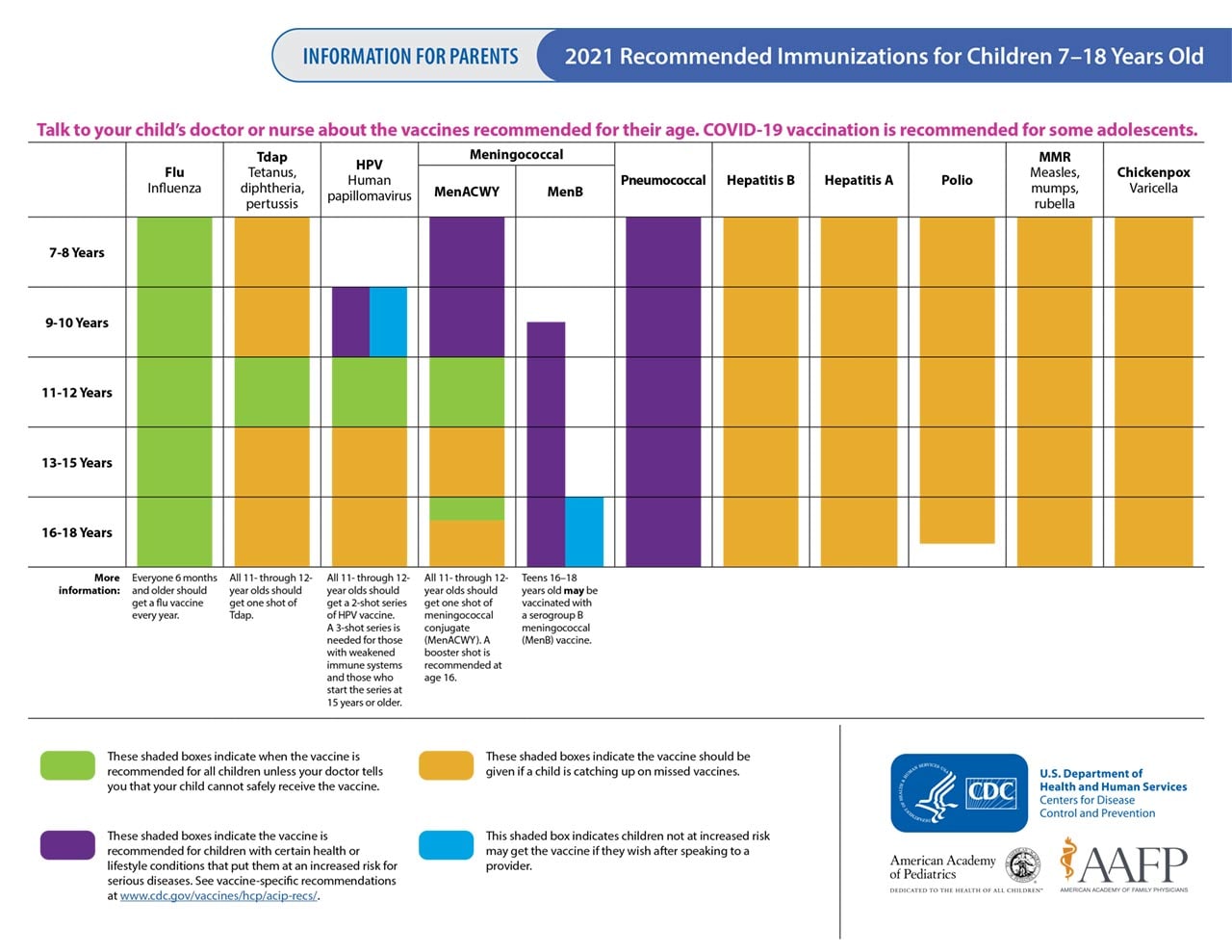 The mission of NCIRD is the prevention of disease, disability, and death through immunization and by control of respiratory and related diseases.

The challenge is to effectively balance efforts in the domestic and global arenas as well as accommodate the specific needs of all populations at risk of vaccine preventable diseases from children to older adults.

NCIRD has so many great programs, groups and resources; some are highlighted below.

The Vaccines for Children (VFC) program is a federally funded program that provides vaccines at no cost to children who might not otherwise be vaccinated because of inability to pay. The Advisory Committee on Immunization Practices (ACIP) is a group of medical and public health experts that develops recommendations on how to use vaccines to control diseases in the United States. The recommendations include who should receive the vaccine, the number of doses needed, the amount of time between doses, and precautions and contraindications.

To meet state and local school entry requirements, parents and guardians submit children’s vaccination records or exemption forms to schools, or schools obtain records from state immunization information systems. These are sent to CDC via a web-based questionnaire in the Secure Access Management System. CDC uses these data to produce state-level and national-level estimates of vaccination coverage.

Additionally, CDC uses several surveys to measure the vaccination rates for vaccines recommended for different groups. The National Immunization Surveys (NIS) are a group of telephone surveys sponsored and conducted NCIRD. If the parent or guardian provides consent and contact information, a questionnaire is mailed to children’s vaccination providers.

Under CGH, the Global Immunization Division (GID) is involved in one of the most effective of all global public health missions – vaccination against deadly diseases – which saves the lives of 2 to 3 million people every year. Did you know that April 24-30, 2021 is World Immunization Week 2020? CDC and global public health partners recognize World Immunization Week during the last week of April every year. Click the image below to learn more about this year’s campaign.

1. Surveillance (What is the problem?)

In public health, we identify the problem by using surveillance systems to monitor health events and behaviors occurring among a population.

As an example, let’s use measles, a vaccine-preventable disease. In 2000, CDC declared measles to be eliminated (not spreading continuously in a country for greater than 12 months) from the United States. But, in 2019 a total of 1,249 measles cases were reported in the United States.

Most cases were associated with large and closely related outbreaks in New York City and the rest of New York State. This epidemiologic curve, or epi curve, below is a graph that shows the cases of measles reported in New York and New Jersey. 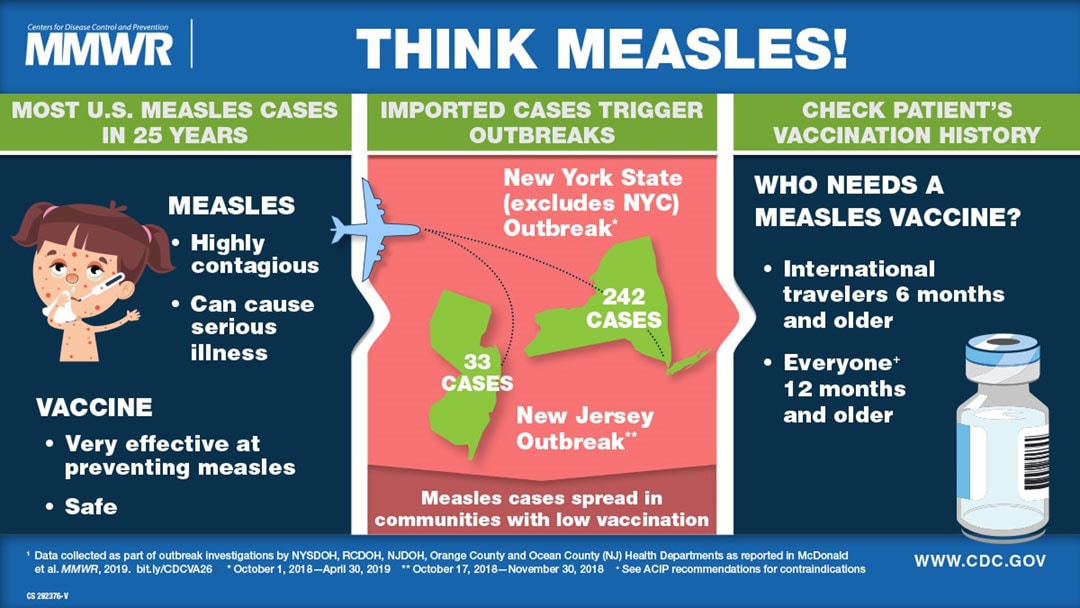 2. Risk Factor Identification (What is the cause?)

After we’ve identified the problem, the next question is, “What is the cause of the problem?” For example, are there factors that might make certain populations more susceptible to disease, such as something in the environment or certain behaviors that people are practicing?

Outbreaks like these might surprise you since measles can be prevented through a childhood vaccine. Investigation into the outbreak revealed that first one unvaccinated teenager was diagnosed with measles after returning to the United States, and the following 17 days, six other unvaccinated travelers were also diagnosed with measles. The unvaccinated travelers reported recent travel in Israel, where an outbreak of approximately 3,150 cases of measles was ongoing. Investigations during October 1, 2018–April 30, 2019, identified 242 laboratory-confirmed and epidemiologically linked measles cases in New York, excluding New York City, and during October 17, 2018–November 30, 2018, identified 33 cases in New Jersey (see the epi curve above). The cases of measles were primarily in members of orthodox Jewish communities.

Once we’ve identified the risk factors related to the problem, we ask, “What intervention works to address the problem?” We look at what has worked in the past in addressing this same problem and if a proposed intervention makes sense with our affected population.

The best intervention in this scenario is increasing vaccination levels in these communities to prevent further spread of measles. Per CDC, measles vaccination rates must be 95%, meaning 95% of the population should be vaccinated, for herd immunity to be achieved. Herd immunity is a situation in which a sufficient proportion of a population is immune to an infectious disease (in this case through vaccination) to make its spread from person to person unlikely. Even individuals not vaccinated (such as newborns and those with chronic illnesses) are offered some protection because the disease has little opportunity to spread within the community.

4. Implementation (How did we do it?)

In these communities, a culturally appropriate and detailed vaccine education book was distributed to 25,000 households and medical providers. Orthodox Jewish leaders were engaged in the outbreak response, with rabbinical leaders supporting vaccination efforts and community groups advocating for vaccination.

CDC also has resources for medical providers so they can help educate their patients about vaccination recommendations before traveling to a country where a disease like measles is endemic. These resources are produced in many languages to help people of different cultural backgrounds access the health information needed to keep them safe and healthy.

As you can see, using The Public Health Approach helps public health professionals identify a problem, find out what is causing it, and determine what solutions/interventions work.

Funded by CDC, the Immunization Action Coalitionexternal icon (IAC) works to increase immunization rates and prevent disease by creating and distributing educational materials for health professionals and the public that enhance the delivery of safe and effective immunization services.

The website’s Teen section features testimonials of the persons whose lives were disrupted by infectious diseases. If you are a fan of books like Matilda, MFG, and Charlie and the Chocolate Factory, you may recognize author Roald Dahl’s name in the list of testimonialsexternal icon. His daughter, Olivia, died from measles complications.

Out of the CDC Museum Collection – Childhood Vaccine-Preventable Diseases

This month’s Out of CDC Museum Collection features historic photographs from a website created through a CDC Museum partnership with Emory Universityexternal icon’s Emory Center for Digital Scholarshipexternal icon. The website, the Global Heath Chroniclesexternal icon, is a collection of materials on public health efforts to prevent, control and eradicate global disease. Here we find these two photographs that, while taken in 1961 and 1962, are very relevant today. In these photographs citizens are lined up to receive the then-newly created polio vaccine. Do they make you think of anything? What about pictures of people waiting for the COVID-19 vaccine seen today? 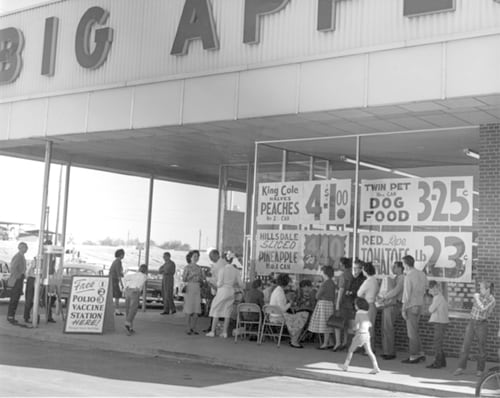 Line outside of a grocery store in Columbus, Georgia during an April 1961 vaccination campaign. 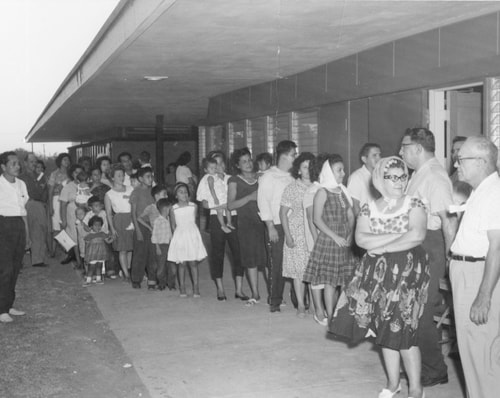 People line up to receive oral polio vaccine in Laredo, Texas, May 1962.

All April 2021 Teen Newsletter winners will be announced 04/27/21 during the Zoom – see individual deadlines below, as applicable.

To qualify for Future CDCer, you must participate in all newsletter activities (scavenger hunt—Goosechase, Zoom, social media challenge, Ask a CDCer, and pre-Zoom game—Kahoot). All that qualify will be entered into a prize drawing for a CDC Museum Public Health Academy t-shirt.

*The following newsletter activities: Scavenger Hunt, Zoom, and Social Media Challenge are available for your participation anytime – even after deadlines. To be eligible for prizes you must complete activities by the deadline.

Want to do a fun digital scavenger hunt?

Want to learn more from CDCers who work on childhood vaccine-preventable diseases?

Advance registration required. All who register by or on 04/27/21 3pm ET will be entered into a prize drawing.

A vaccine for COVID-19 could soon be approved for persons aged 16-17.

Create a social media post convincing your peers to get the soon-to-be-available COVID-19 vaccine!

Note: Do NOT post it yet, as the vaccine is not yet available.

Click for instructions and to submit your postexternal icon.

Do you have a question for a CDCer who works on childhood vaccine preventable diseases?

Submit your question for the childhood immunization experts who will be joining the Zoom on 04/27/21 at 8pm ET.

Step 6: Go to https://www.cdc.gov/vaccines/parents/diseases/index.html to complete your missions