Most tick species undergo one of four different life cycles. Members of the family Ixodidae undergo either one-host, two-host or three-host life cycles. During the one-host life cycle, ticks remain on the same host for the larval, nymphal and adult stages, only leaving the host prior to laying eggs. During the two-host life cycle, the tick molts from larva to nymph on the first host, but will leave the host between the nymphal and adult stages. The second host may be the same individual as the first host, the same species, or even a second species. Most ticks of public health importance undergo the three-host life cycle, whereby the tick leaves the host after the larval and nymphal stages. The three hosts are not always the same species, but may be the same species, or even the same individual, depending on host availability for the tick. Members of the family Argasidae undergo what is called a multihost life cycle. Argasid ticks have two or more nymphal stages, each requiring a blood meal from a host. Unlike the ixodid ticks, which stay attached to their hosts for up to several days while feeding, argasid ticks are adapted to feeding rapidly (about an hour) and then promptly leaving the host.

Life cycle of one-host ixodid (hard) ticks. The adult is considered the diagnostic stage, as identification to the species level is best achieved with adults. Few ixodids of public health importance follow this pattern; an example is Rhipicephalus annulatus, which can serve as a vector for babesiosis.

One-host ixodid ticks remain on the same host for the larval, nymphal and adult stages, only leaving the host prior to laying eggs. Vertical transmission of Babesia via transovarial transmission has been demonstrated for some species of ticks. Gravid females lay eggs in the environment

. The eggs hatch into six-legged larvae

. Larvae seek out and attach to the host and after two molts, develop into adults

. Although humans may serve as incidental hosts for species normally found on other animals, they usually do not host all three stages. Females drop from the host to lay eggs

and the cycle repeats.

Life cycle of the two-host ixodid (hard) ticks. The adult is considered the diagnostic stage, as identification to the species level is best achieved with adults. An example of an ixodid tick of public health concern with this life cycle is Hyalomma marginatum, a vector of Crimean-Congo viral hemorrhagic fever.

Two-host ixodid ticks have a life cycle that usually spans over two years. Gravid females drop off the second host after feeding to lay eggs

and overwinter in this stage. The following spring, the larvae seek out and attach to the first host

, usually a rodent or lagomorph. The larvae molt into nymphs on the first host

. Engorged nymphs drop off the first host, usually in the late summer or fall

and overwinter in the nymphal stage. Nymphs molt into adults the following spring

and seek out the second host

, which is usually a larger herbivore (bovids, cervids, etc). Adults feed on the second host during the summer and mate. In the fall, females drop off the second host to continue the cycle. Females may reattach and feed multiple times. Humans may serve as first or second hosts for ticks with this life cycle. Also, the second host does not necessarily have to be a separate species, or even a separate individual, as the first host.

Three-host ixodid ticks have a life cycle that usually spans three years, although some species can complete the cycle in only two years. Adult females drop off the third host to lay eggs after feeding

and overwinter in the larval stage. In the spring, the larvae seek out and attach to the first host, usually a small rodent

. Later in the summer, engorged larvae leave the first host

and molt into nymphs

, usually in the fall. The ticks overwinter in this stage. During the following spring, the nymphs seek out and attach to the second host

, usually another rodent or lagomorph. The nymphs feed on the second host and drop off later in the summer

off the host in the late summer or fall, and overwinter in this stage. The next spring, adults seek out and attach to a third host, which is usually a larger herbivore (including cervids and bovids), carnivore, or human

. The adults feed and mate on the third host during the summer. Females drop off the host in the fall to continue the cycle. Females may reattach and feed multiple times. The three hosts do not necessarily have to be different species, or even different individuals. Also, humans may serve as first, second or third hosts.

Multihost life cycle for argasid (soft) ticks. Unlike the Ixodidae, members of the family Argasidae have two or more nymphal stages, each of which requires a blood meal. This pattern is referred to as the multihost life cycle. Two species of public health concern in the United States, Ornithodoros hermsi and O. turicata, are vectors of tick-borne relapsing fever (TBRF) spirochetes. In Africa and Asia, O. moubata is a vector of TBRF spirochetes. Members of the genus Carios are vectors of TBRF spirochetes in Central and South America.

Mating usually occurs, and egg-laying always occurs, off the host in a sheltered area (usually an animal nest). Eggs hatch into six-legged larvae

in the parents’ sheltered area. They quest for a host in the vicinity of the sheltered area. Once a suitable host is found, they feed for anywhere from one hour to several days, depending on the species

. After feeding, the larvae leave the host and molt into the first nymphal instars in the sheltered area

. The nymphs quest for, and feed on, the second host

rapidly (usually about an hour). The second host is usually the same species, and often the same individual, as the first host. The first nymphal instars leave the host and molt into the next nymphal instars in the sheltered area

. This cycle can continue to accommodate up to seven nymphal instars

, depending on the species. After the last nymphal instar has fed, it leaves the host and molts into an adult

in the sheltered area. Adults may continue to feed on the host

, feeding rapidly and detaching after each blood meal. Females of some species lay egg batches after each meal. Humans are usually only incidental hosts for argasid ticks and may be fed upon by any of the stages.

While ticks as a whole are worldwide in distribution, most species are restricted to various regions. All major biogeographic regions (except Antarctica) have tick species of public health importance.

Most ticks do not elicit any response from their host while feeding. Ticks in the genera Dermacentor and Ixodes have been implicated in tick paralysis, a condition characterized by an acute, ascending, flaccid motor paralysis that can result in death if the tick is not removed. The condition is believed to be caused by toxins in the ticks’ saliva.

Members of the genus, Amblyomma, are known vectors of a variety of diseases in humans. In North America, A. americanum transmits Francisella tularensis (tularemia), Ehrlichia chaffensis (ehrlichiosis), and Rickettsia rickettsii (Rocky Mountain spotted fever, or RMSF). In Africa, A. hebraeum transmits Rickettsia conorii (boutonneuse fever); in Central and South America, A. cajennense transmits RMSF. Members of the genus Amblyomma are characterized by having mouthparts noticeably longer than the basis capituli, a usually ornate dorsal shield, eyes present on the dorsal shield, and festoons (which may be difficult to see in engorged specimens). Adult females of A. americanum have a distinctive white spot near the posterior end of the dorsal shield. 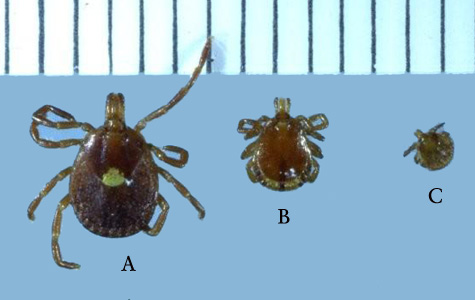 Figure A: Adult female (A), male (B), and nymph (C) of A. americanum. Notice the characteristic white spot on the female's dorsal shield. Image courtesy of James Occi. 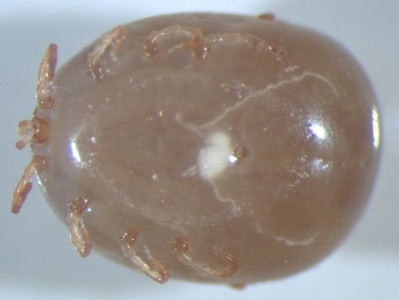 Figure E: Ventral view of an engorged nymph of Amblyomma sp., collected on a patient with travel history to Peru. Notice the festoons are not visible in the specimen due to the engorged state. Images courtesy of the Washington State Public Health Laboratories. 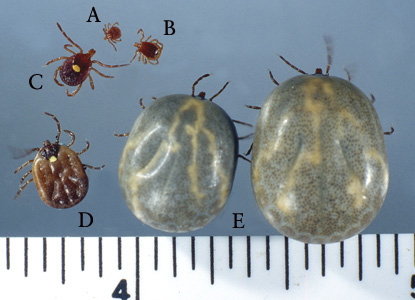 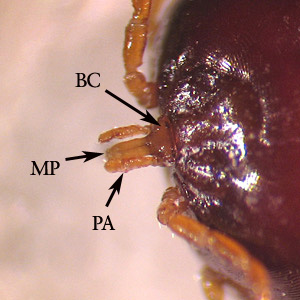 Figure C: Close-up of the mouthparts of A. americanum. Notice the mouthparts (MP) and palps (PA) are long, in comparison with the basis capituli (BC). 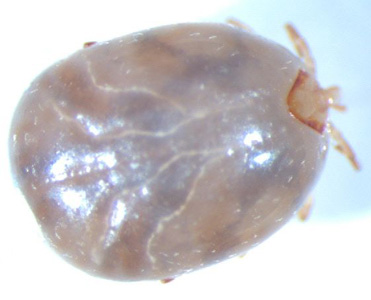 Figure D: Dorsal view of an engorged nymph of Amblyomma sp., collected on a patient with travel history to Peru. Notice the festoons are not visible in the specimen due to the engorged state. Images courtesy of the Washington State Public Health Laboratories.

Members of the genus, Dermacentor, are known vectors of Rickettsia rickettsii (Rocky Mountain spotted fever, or RMSF), Colorado tick fever virus, Francisella tularensis (tularemia), Rickettsia sibirica (Siberian tick typhus), and Central European tick-borne encephalitis virus. They have also been implicated in tick paralysis. In North America, the two most important species medically are D. variabilis and D. andersoni, the latter of which is more prevalent in the Pacific Northwest and the former in the south and east. However, their distributions may overlap in the west, and identification to the species level is best obtained by comparing the morphologic features of the spiracular plates. Adult members of the genus Dermacentor are characterized by a usually ornate dorsal shield, mouthparts short (in comparison with the basis capituli), eyes on the dorsal shield, and the presence of festoons (which may be difficult to see in engorged specimens). 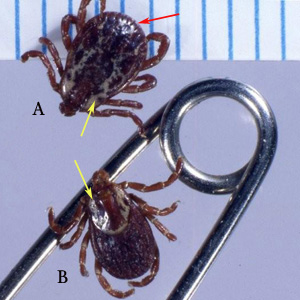 Figure A: Male (A) and female (B) of D. variabilis. Notice the ornate dorsal shields (yellow arrows), which on the male covers most of the tick's body. Also notice the presence of festoons (red arrow). Image courtesy of James Occi. 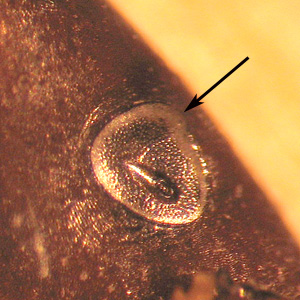 Figure E: Spiracular plate of D. variabilis. Notice the slight dorsal prolongation (arrow) of the plate and large number of smaller goblet cells on the plate. 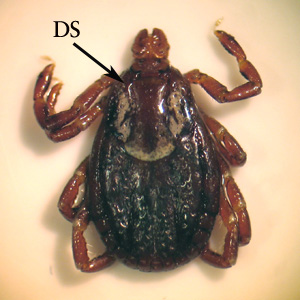 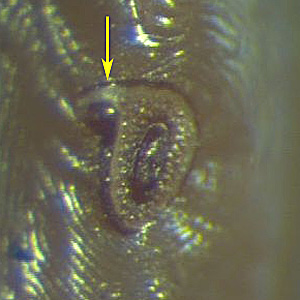 Figure F: Spiracular plate of D. andersoni. Notice the more pronounced dorsal prolongation (arrow) of the plate and the larger, yet fewer in number, goblet cells on the plate. Image courtesy of the Washington State Public Health Laboratories. 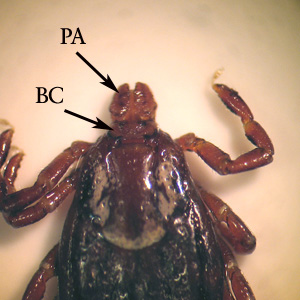 Figure C: Higher-magnification of the specimen in Figure B. Notice the palps (PA) are short in relation to the basis capituli (BC). 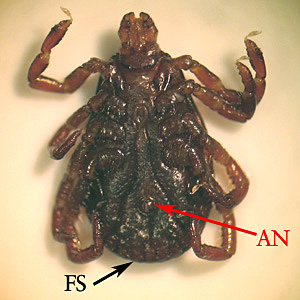 Figure D: Underside of the specimen in Figure B, showing the anus (AN) and festoons (FS). 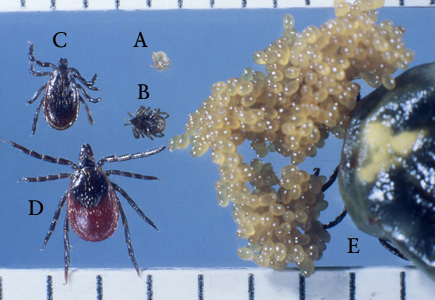 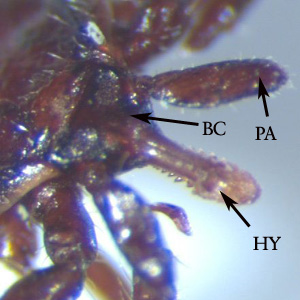 Figure E: Dorsal view of the specimen in Figure C, showing a close-up of the anterior region. Notice the hypostome (HY) and palps (PA) are long, in relation to the basis capituli (BC). 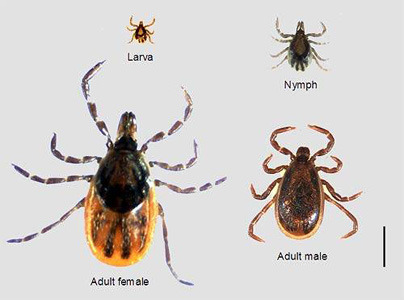 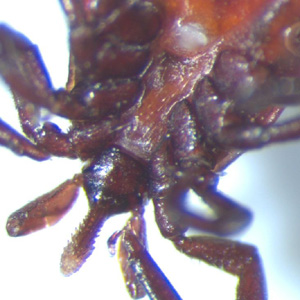 Figure F: Ventral view of the specimen in Figure C, showing a close-up of the anterior region. 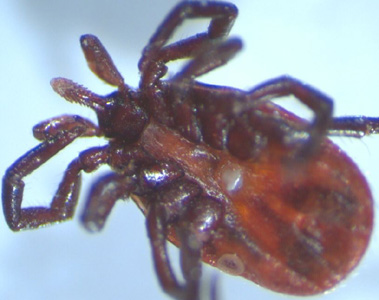 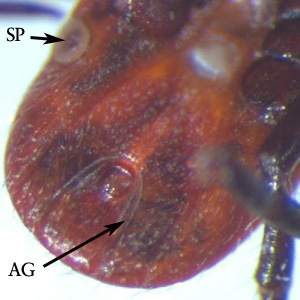 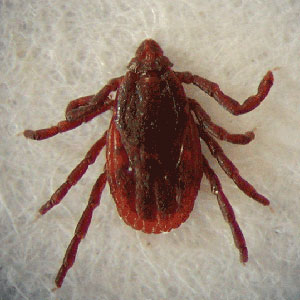 Figure A: Female of R. sanguineus. 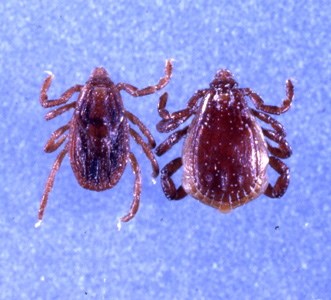 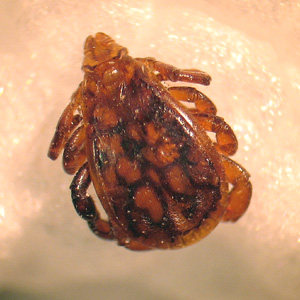 Figure B: Male of R. sanguineus. 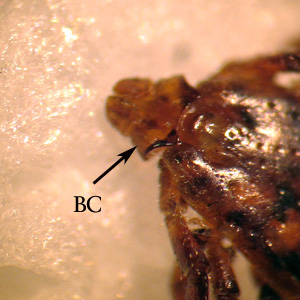 Figure C: Close-up of the specimen in Figure B. Notice the laterally-produced, angulate basis capituli (BC). 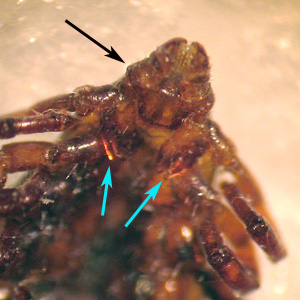 Members of the genus, Ornithodoros, are known vectors of Borrelia hermsi (tick-borne relapsing fever, or TBRF) in North America and several TBRF spirochetes in Africa. Like most members of the Argasidae, or soft ticks, Ornithodoros spp. are characterized by lacking a dorsal shield and not displaying marked sexual dimorphism. Their mouthparts are subterminally attached and not visible from above. Adults and developing nymphs do not remain attached to their hosts, as do members of Ixodidae; rather they are adapted to feeding rapidly and leaving the host promptly. 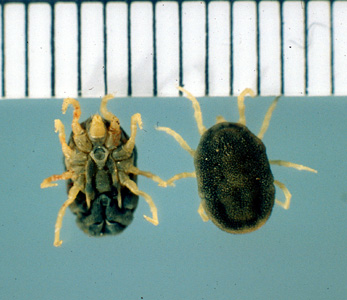 Figure A: Ventral (left) and dorsal (right) views of O. turicata, a known vector of TBRF spirochetes in the midwestern and southwestern United States. Image courtesy of James Occi. 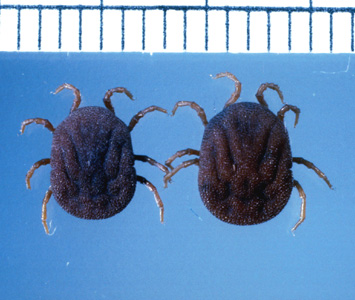