This is a generalized life cycle proposed by John J. Ruffolo, Ph.D. (Cushion, MT, 1988) for the various species of Pneumocystis. These fungi are found in the lungs of mammals where they reside without causing overt infection until the host’s immune system becomes debilitated. Then, an oftentimes lethal pneumonia can result. Asexual phase: trophic forms

and produce a zygote or sporocyte (early cyst)

. Spores exhibit different shapes (such as, spherical and elongated forms). It is postulated that elongation of the spores precedes release from the spore case. It is believed that the release occurs through a rent in the cell wall. After release, the empty spore case usually collapses, but retains some residual cytoplasm

. A trophic stage, where the organisms probably multiply by binary fission is also recognized to exist. The organism causes disease in immunosuppressed individuals.

Worldwide, in humans and animals. Serologic evidence indicates that most healthy children have been exposed by age 3 to 4. Pneumocystis pneumonia (PCP) occurs in immunosuppressed individuals and in premature, malnourished infants.

Trophozoites of Pneumocystis jirovecii are 1-5 µm, pleomorphic and contain a single nucleus. Trophozoites are found in the lungs and many other extrapulmonary specimens, especially in immunocompromised patients. 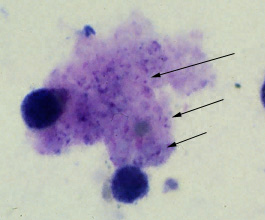 Figure A: Trophozoites of P. jirovecii in a bronchoalveolar lavage (BAL) specimen from an AIDS patient, stained with Giemsa.

Pneumocystis jirovecii cysts are thick-walled, rounded and approximately 5-8 µm in size, although thin-walled cysts exist also. Cysts contain up to eight intracystic bodies. Precysts have also been described for this organism. Precysts are spherical, 4-7 µm in diameter and do not contain intracystic bodies (but may contain one or more nuclei). Cysts are found in the lungs and many other extrapulmonary specimens, especially in immunocompromised patients. 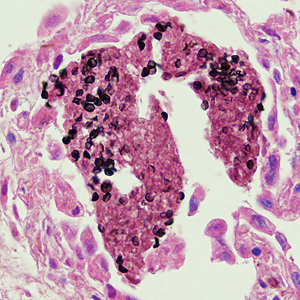 Figure A: Cysts of P. jirovecii in lung tissue, stained with methenamine silver and hematoxylin and eosin (H&E). The walls of the cysts are stained black; the intracystic bodies are not visible with this stain. 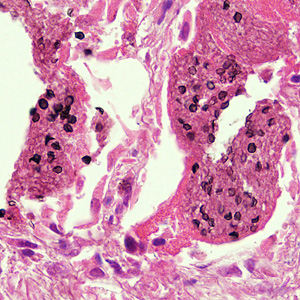 Figure B: Cysts of P. jirovecii in lung tissue, stained with methenamine silver and hematoxylin and eosin (H&E). The walls of the cysts are stained black; the intracystic bodies are not visible with this stain. 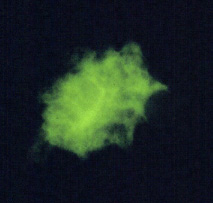 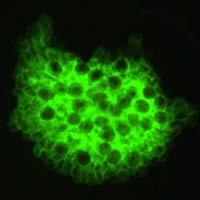 Figure B: Direct immunofluorescence antibody stain using monoclonal antibodies that target Pneumocystis jirovecii. This image is from a bronchoalveolar lavage (BAL) specimen from a patient with a malignancy. Image courtesy of Brigham & Women's Hospital, Boston, MA.

The specific diagnosis is based on identification of P. jirovecii in bronchopulmonary secretions obtained as induced sputum or bronchoalveolar lavage (BAL) material. In situations where these two techniques cannot be used, transbronchial biopsy or open lung biopsy may prove necessary. Microscopic identification of P. jiroveci trophozoites and cysts is performed with stains that demonstrate either the nuclei of trophozoites and intracystic stages (such as Giemsa) or the cyst walls (such as the silver stains). In addition, immunofluorescence microscopy using monoclonal antibodies can identify the organisms with higher sensitivity than conventional microscopy. 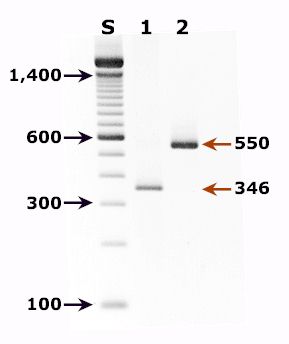 Agarose gel (2%) analysis of PCR-amplified products from DNA extracted from a broncho alveolar lavage (BAL) diagnostic specimen of a patient with pulmonary symptoms.

Agarose gel (2%) analysis of PCR-amplified products from DNA extracted from a bronchoalveolar lavage (BAL) diagnostic specimen of a patient with pulmonary symptoms.