An 18-year-old male living in India presented with recurrent periumbilical abdominal pain for one week. Other symptoms included mild anemia and eosinophilic leukocytosis. The patient underwent an appendectomy and the appendix was sent to pathology.  Sections were obtained, stained with hematoxylin and eosin (H & E) and reviewed. A worm was discovered in the lumen of the appendix and Figure A shows a low magnification view of a cross-section of the worm in the lumen. Figure B shows a higher magnification of the cross-section and Figure C highlights ova observed in utero. What is your diagnosis? Based on what features? 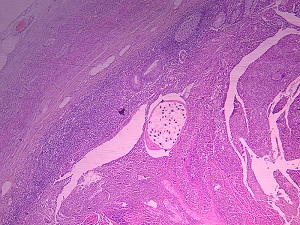 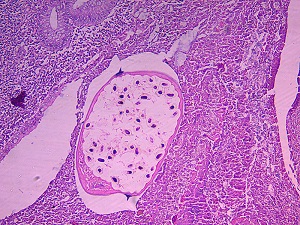 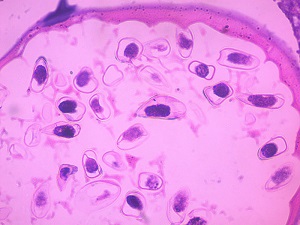 This was a case of appendicitis secondary to Enterobius vermicularis infection.  Morphologic diagnostic features of the nematode shown in the Figures included:

Although no sizes were provided in this case, the diagnostic features shown are consistent with those of E. vermicularis. Adults typically colonize the colon and cecum however finding larva or adults in the appendix (post appendectomy) is not uncommon.