A 76-year-old male in India presented with swelling and redness in his right eye. He did not indicate any fever and had not traveled outside of India. Upon examination, a 14 cm long worm was observed in and removed from the problematic eye. Images of the worm (Figures A–C) were captured and sent to the CDC-DPDx for diagnostic assistance. Figure A shows the whole worm. Figure B shows a close-up of the anterior end. Figure C shows a close-up of the mid-body highlighting the cuticle. What is your diagnosis? Based on what criteria? 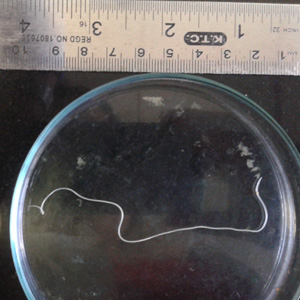 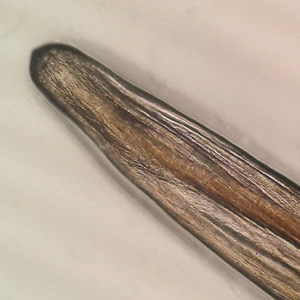 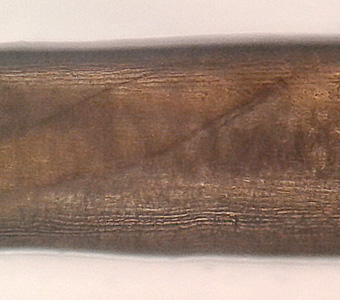 This was a case of dirofilariasis caused by a nematode in the genus Dirofilaria. The presence of longitudinal external cuticular ridges (Figure C) and the location in India are suggestive of D. repens. The length of the worm suggests it was a female (males of D. repens are smaller, at 50-70 mm long). The absence of transverse cuticular ridges and cuticular bosses rules-out Onchocerca volvulus and Loa loa, respectively. Also, neither of these species occur in India, and published reports indicating such are probably based on misidentified Dirofilaria.

This case and images were kindly provided by Jupiter Hospital, Thane, India.