A seven-year-old, previously healthy child developed flu-like symptoms and rapidly progressive bulbar palsy, coma, and eventually death. Imaging revealed florid ventriculitis. A viral etiology was initially suspected. The autopsy revealed extensive necrotizing (mixed inflammatory, occasional giant cells, vasculitic) granulomatous encephalitis (Figures A and B), with a subependymal necroinflammatory process. Tissue sections of the brain were made and stained with hematoxylin and eosin (H&E). Images of the brain and subsequent tissue sections (Figures C and D, taken at 1000x oil magnification) were sent to DPDx for diagnostic assistance. What is your diagnosis? Based on what criteria? What further testing is recommended? 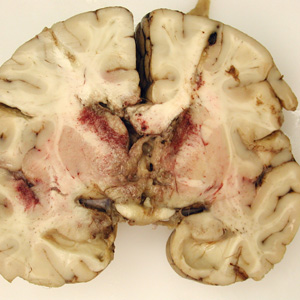 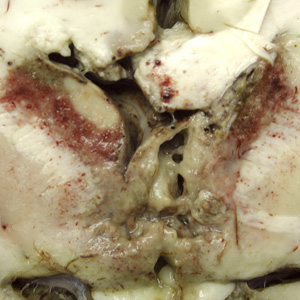 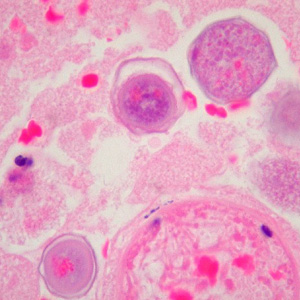 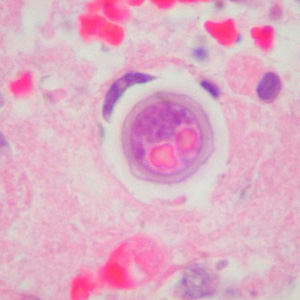 This was a case of granulomatous amebic encephalitis (GAE) caused by Balamuthia mandrillaris. Diagnostic features were:

Balamuthia is one of four genera of typically free-living amoebae implicated in amebic encephalitis, the other three being Naegleria, Acanthamoeba, and only recently, Sappinia. Amoebae enter the body through nasal passages or broken skin and can invade the central nervous system by hematogenous dissemination. Identification to the genus level is sometimes difficult based on morphology of the amoebae alone. In this particular case, Naegleria could have been ruled-out by the presence of cysts, as this genus does not produce cysts in human tissue. This case was confirmed by an immunofluorescence test and real-time PCR using Balamuthia-specific primers. Cultivation of the causal organism may also prove useful.

The case and the images were kindly contributed by Dr. Carlos Galliani and the Cook Children’s Hospital in Fort Worth, TX.