A 10-year-old boy from India was tested for malaria by blood smear examination. The commercial laboratory that reviewed the smears forwarded them, along with EDTA blood, to their state health department for consultation. Figures A and B show what was seen on the original stained slides made by the commercial laboratory. Figures C and D show what was seen on the slides made by the state health department. Figures A-D were taken by the state and sent to DPDx for diagnostic assistance. In a follow-up email, the state health department stated that the patient had been treated before the blood was obtained. A preliminary diagnosis was made by the DPDx Team which was sent to the state health department, along with a request for the stained smears and EDTA blood for possible molecular testing. Figures E and F were taken from a stained thick smear; Figures G and H were taken from a stained thin smear. Upon reviewing the smears, DPDx Team members also observed the same object that appears in Figure C. What is your diagnosis? Based on what criteria? 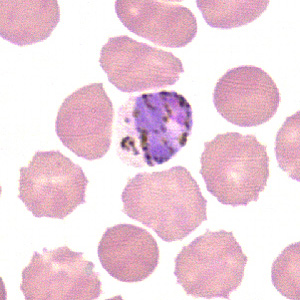 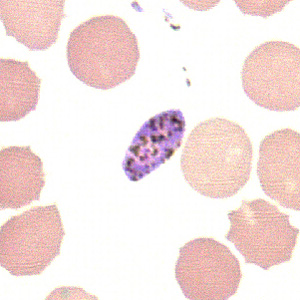 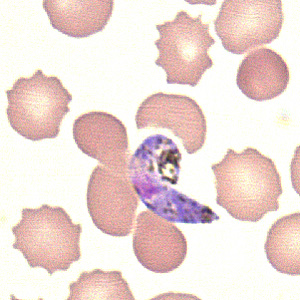 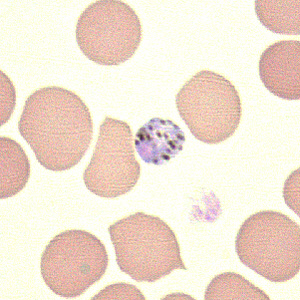 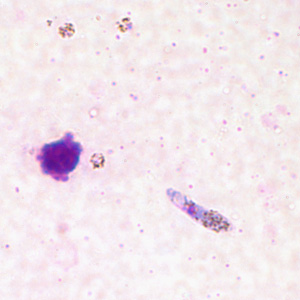 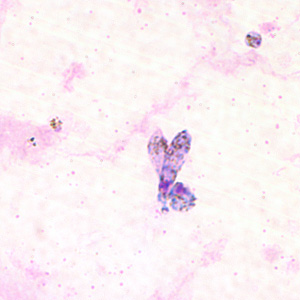 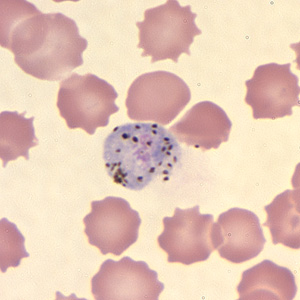 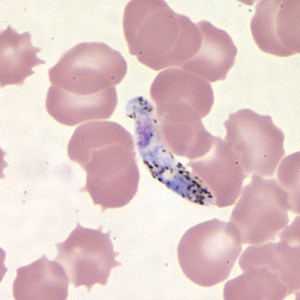 This was a case of malaria caused by Plasmodium sp. A definitive species determination was not possible based on the images, nor from examination of the stained blood smears. The morphologic appearance of the Plasmodium parasites and of the uninfected red blood cells suggests that considerable time elapsed before the smears were prepared. Subsequent PCR analysis of an aliquot of EDTA blood determined that only P. vivax was present.

We believe that the structures that somewhat resembled gametocytes of P. falciparum were actually ookinetes (a motile zygote normally found in the stomach of an infected mosquito). Two key features that support this conclusion were:

This case emphasizes the importance of making blood smears as soon as possible after blood is collected. Quite a bit of time must have elapsed between the blood collection and slide preparation in order to create conditions that were right for development of ookinetes from some of the gametocytes. Since the patient had undergone treatment, apparently only gametocytes were present as they can persist in the blood for some time post-treatment.