Three species of Mansonella, a vector-borne filarial nematode genus, are associated with human infections: M. ozzardi, and M. perstans (=Dipetalonema perstans), and M. streptocerca (=Dipetalonema streptocerca). These species vary in their geographic occurrence and localization within the host. Recently, a novel molecular clade of M. perstans, M. perstans “deux” has been reported from both Brazil and Gabon. On rare occasions, zoonotic species such as M. rodhaini and other unidentified Mansonella sp. have been detected in human infections. 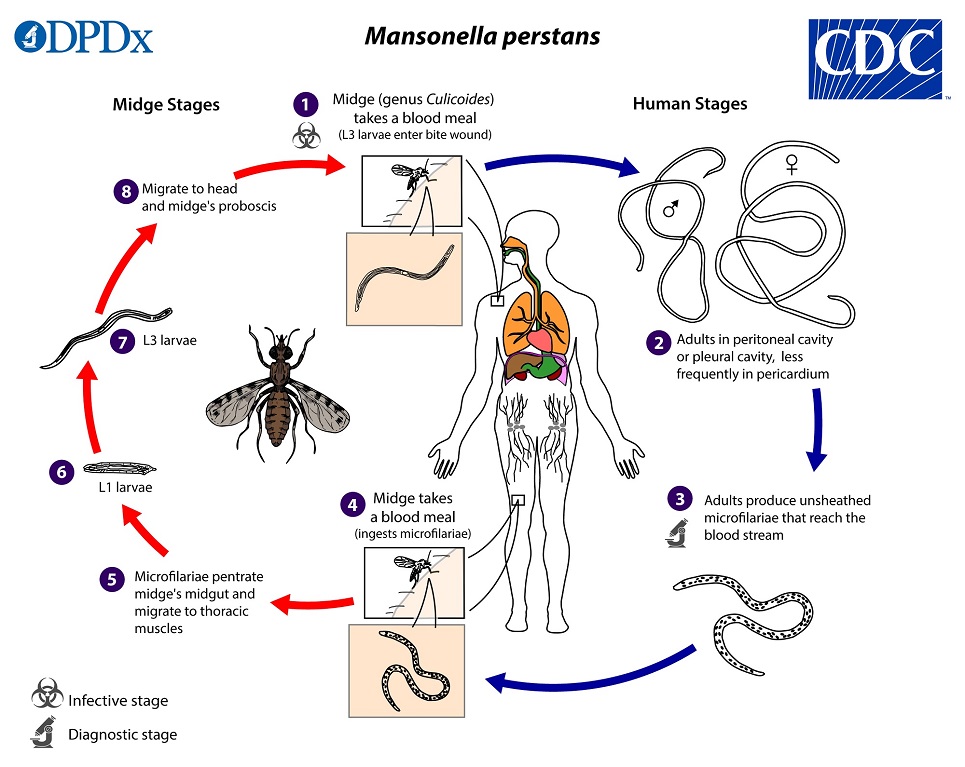 During a blood meal, an infected midge introduces third-stage (L3) larvae onto the skin of the human host, where they penetrate into the bite wound

. They develop into adults that reside in body cavities, most commonly the peritoneal cavity or pleural cavity, and less frequently in the pericardium

. The size range for female worms is 70 to 80 mm in length and 120 µm in diameter, and the males measure approximately 45 mm by 60 µm. Adults produce unsheathed, subperiodic microfilariae (200 µm long, 4.5 µm wide) which enter peripheral circulation

. A midge vector ingests microfilariae during a blood meal

. After ingestion, the microfilariae migrate from the midge’s midgut through the hemocoel to the thoracic muscles of the arthropod

. The third-stage infective larvae migrate to the midge’s proboscis 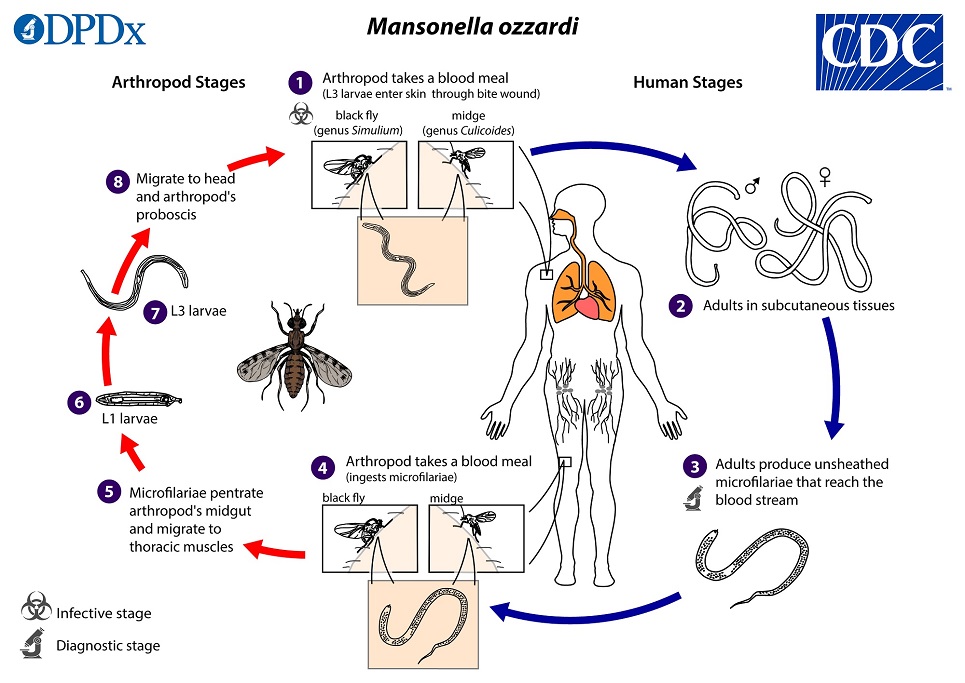 During a blood meal, an infected arthropod (midges, genus Culicoides, or blackflies, genus Simulium) introduces third-stage filarial larvae onto the skin of the human host, where they penetrate into the bite wound

. They develop into adults that commonly reside in subcutaneous tissues

. The arthropod ingests microfilariae during a blood meal

. After ingestion, the microfilariae migrate from the arthropod’s midgut through the hemocoel to the thoracic muscles

During a blood meal, an infected midge introduces third-stage filarial larvae onto the skin of the human host, where they penetrate into the bite wound

. They develop into adults that reside in the dermis, most commonly less than 1 mm from the skin surface

. The females measure approximately 27 mm in length, and are 50 µm wide at the level of the vulva (anteriorly) and ovaries (near the posterior end), and up to 85 µm at the mid-body. Males measure 50 µm in diameter. Adults produce unsheathed and non-periodic microfilariae, measuring 180 to 240 µm by 3 to 5 µm, which reside in the skin but can also reach the peripheral blood

. The midge vector ingests the microfilariae during a blood meal

. After ingestion, the microfilariae migrate from the midge’s midgut through the hemocoel to the thoracic muscles

and subsequently into third-stage larvae

. The third-stage larvae migrate to the midge’s proboscis

M. perstans appears to be solely a human-associated species. The primary vectors are biting midges of the genus Culicoides.

M. ozzardi also seems to be associated primarily with humans, but patas monkeys (Erythrocebus patas) have been experimentally infected. The primary vectors are biting midges of the genus Culicoides. In some areas of South America, the black fly Simulium amazonicum and in Haiti, the midge Leptoconops bequaerti may act as concurrent vectors.

M. streptocerca is primarily a parasite of humans, but infections in wild chimpanzees have been reported on rare occasions. Like other Mansonella spp., the primary vectors are biting midges of the genus Culicoides.

Mansonella perstans is endemic throughout West, East, and Central Africa, and is also highly prevalent in some neotropical regions of Central and South America where it was likely introduced.

M. streptocerca is an Old World species that occurs in tropical regions of West and Central Africa.

Generally, the transmission of Mansonella spp. is highly focal and local prevalence varies widely within endemic regions. Travel-related cases in residents of non-endemic countries are unusual but have been documented.

In contrast to other filarial diseases (Bancroftian filariasis, onchocerciasis, and loiasis) which more commonly cause illness in infected people, the clinical presentation of most Mansonella infections generally appears to be mild; many infections are asymptomatic, particularly among individuals living in endemic regions. A complicating feature of Mansonella infections is that their geographic distribution overlaps that of other filarial diseases that may have similar clinical manifestations. It is difficult to be certain that symptoms identified in cross-sectional studies of patients in endemic areas were due to Mansonella or to co-infection with other parasites.

Most infections with M. perstans are believed to be asymptomatic. When symptoms occur they appear related to migration of adult worms and include transient subcutaneous swellings (similar to those caused by Loa loa), pericarditis and pleuritis, and ocular symptoms (e.g., impaired visual acuity) if microfilariae enter the eye. Non-specific symptoms including fever, fatigue, pruritus, arthralgias, and abdominal pain may occur. Headache and neuropsychiatric symptoms also have been reported. Signs may include lymphadenopathy and eosinophilia.

In M. ozzardi, the majority of infections are asymptomatic, although fever, pruritis, arthralgias, headache, rashes, lymphadenopathy, edema, and pulmonary symptoms are reported; and eosinophilia is common. In Brazil, some infections have been associated with corneal lesions.

Less is known about the clinical manifestations of M. streptocerca; however, most infections are believed to be asymptomatic. Pruritis, dermatitis and hyperpigmented lesions on the torso are reported in association with M. streptocerca, however, subcutaneous nodules do not occur. As in infections with other Mansonella spp., eosinophilia is common.

Microfilariae of Mansonella perstans are unsheathed and measure 190—200 µm in stained blood smears and 180—225 µm in 2% formalin. The tail is blunt and nuclei extend to the tip of the tail. Microfilariae circulate in the blood. 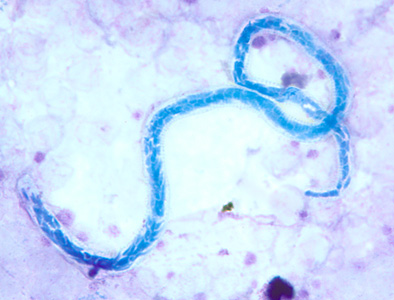 Figure A: Microfilaria of M. perstans in a thick blood smear stained with Giemsa, from a patient from Cameroon. 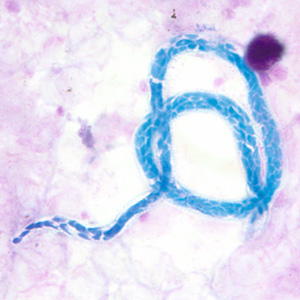 Figure B: Microfilaria of M. perstans in a thick blood smear stained with Giemsa, from a patient from Cameroon. 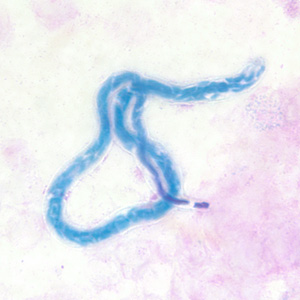 Figure C: Microfilaria of M. perstans in a thick blood smear stained with Giemsa, from a patient from Cameroon. 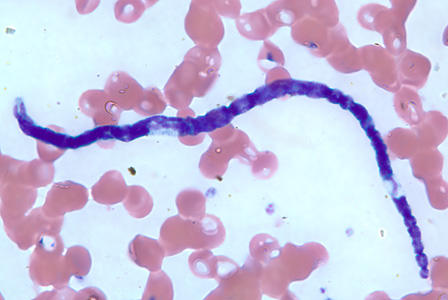 Figure D: Microfilaria of M. perstans in a thin blood smear from the same specimen as Figures A-C. 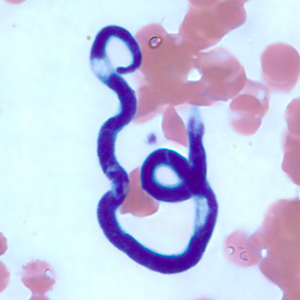 Figure E: Microfilaria of M. perstans in a thin blood smear from the same specimen as Figures A-D. 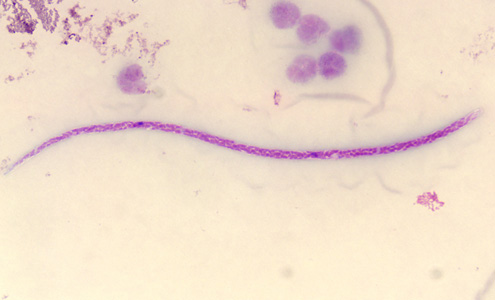 Microfilariae of Mansonella ozzardi are unsheathed and measure 160—205 µm in stained blood smears and 200—255 µm in 2% formalin. The tail tapers to a point and the nuclei end well before the end of the tail, which is usually bent in a small hook-like shape. Microfilariae circulate in blood but may be rarely found in the skin, and should be thus distinguished from Wuchereria bancrofti and Onchocerca volvulus. 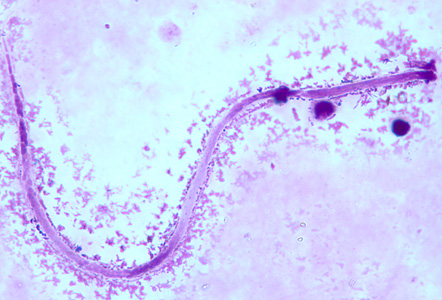 Figure A: Microfilaria of M. ozzardi in a thick blood smear, stained with Giemsa. 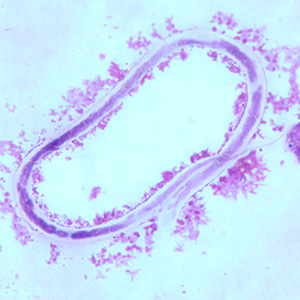 Figure B: Microfilaria of M. ozzardi in a thick blood smear, stained with Giemsa. 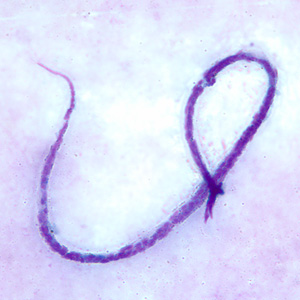 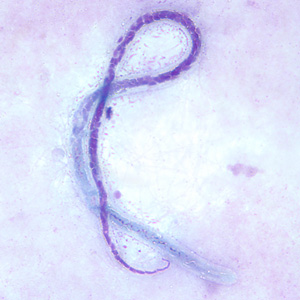 Figure D: Microfilaria of M. ozzardi in a thick blood smear, stained with Giemsa. Note the hook-like end to the tail in this figure.
Microfilariae of M. streptocerca.

Microfilariae of Mansonella streptocerca are unsheathed and measure 180—240 µm by 3—5 µm. The tail is bent into a hook-like shape and the nuclei extend to the end of the tail. Microfilariae are found in skin and do not circulate in the blood, and should be distinguished from those of Onchocerca volvulus.

Figure A: Microfilaria of M. streptocerca, fixed in 2% formalin and stained with hematoxylin.
M. streptocerca adult in tissue biopsy.

Rarely, Mansonella streptocerca may be found in tissue sections. Adults are very small (maximum diameter 80 µm for females, 50 µm for males) and have typical filarial features, including paired uterine tubes and a diminished intestine. The musculature is coelomyarian with a tall contractile portion. Microfilariae may be seen in various stages of development in utero. 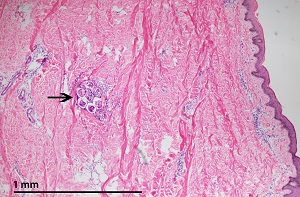 Figure A: Coiled female M. streptocerca (arrow) found ~1.5 mm below the surface of the skin, hematoxylin and eosin stained. 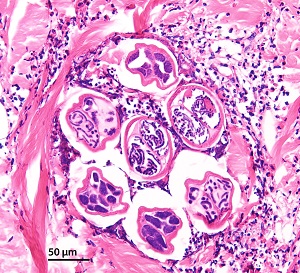 Figure B: Closer view of the coiled female M. streptocerca in Figure A. Note the microfilariae within the uterine tubes.

Mansonella perstans and M. ozzardi are usually diagnosed by the finding of microfilariae circulating in blood whereas M. streptocerca is usually diagnosed by finding microfilariae in skin snips. The rare human cases of M. rodhaini were also diagnosed via skin snips. Concentration techniques (e.g. Knott’s concentration, polycarbonate membrane filtration) may increase sensitivity. Note that these filariae do not generally exhibit periodicity, though in some regions, M. perstans-infected patients may exhibit slightly elevated microfilaremia in morning hours.

Skin snips should be thick enough to include the outer part of the dermal papillae but not so thick as to produce bleeding (a ~2 mm wide section should be sufficient). Skin snips should be placed immediately in normal saline or distilled water, just enough to cover the specimen. Microfilariae tend to emerge more rapidly in saline, however in either medium the microfilariae typically emerge in 30—60 min and can be seen in wet mount preparations. For a definitive diagnosis, allow the wet mount to dry, fix in methanol, and stain with Giemsa or hematoxylin-and-eosin.

In the context of clinical diagnosis, the primary use of Mansonella molecular testing is to aid in differentiating microfilariae of M. streptocerca from Onchocerca volvulus in skin snips. In research settings, real-time PCR (RT-PCR) assays can be used to detect and quantify M. perstans and M. ozzardi microfilariae, and loop-mediated isothermal amplification assays (LAMP) have been developed for field use.

Serological assays developed for the detection of Mansonella spp.–specific antibodies or antigens are generally of limited utility due to cross-reactions with other filarial species and potentially other nematodes.

Standard precautions for the processing of blood and tissue samples apply.