Inermicapsifer madagascariensis (=cubensis) (=arvicanthidis) infects many species of rodents, and is rarely found in humans. It is an uncommonly encountered and poorly studied zoonotic cestode (family Anoplocephalidae) causing intestinal infections in humans. This species has been the subject of historical taxonomic debate, especially in regard to its relationship with Raillietina. Invalid names previously attributed to I. madagascariensis include “Taenia madagascariensis” or “Raillietina madagascariensis”. 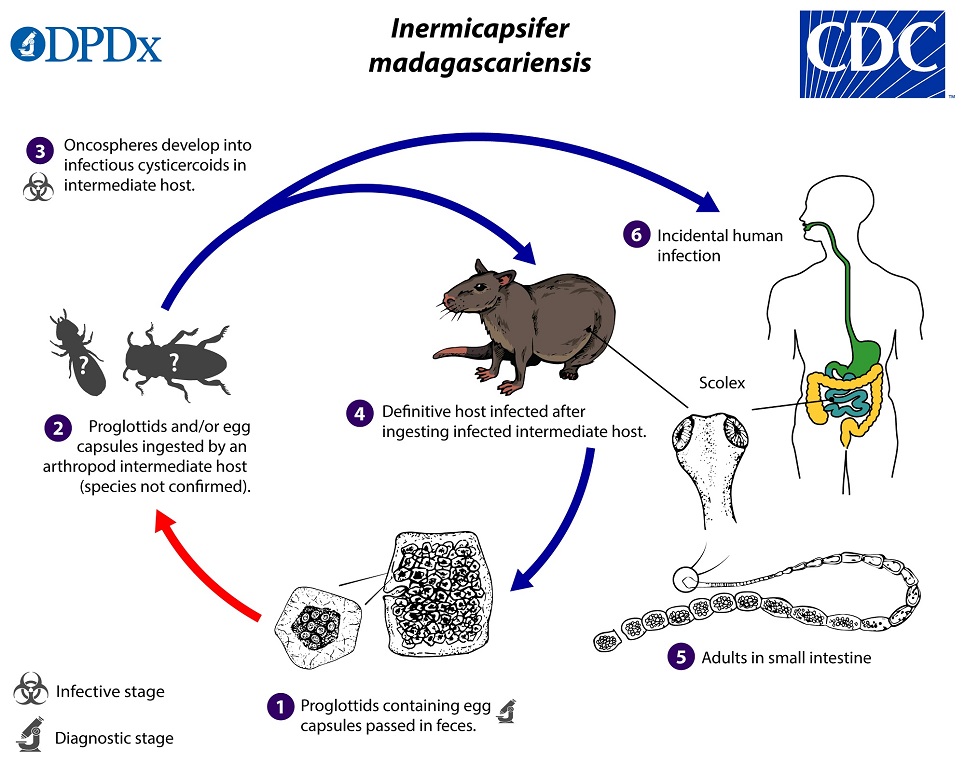 . An unknown intermediate host (likely an arthropod) ingests proglottids, or perhaps free egg capsules released as the proglottid breaks down in the environment

. Within the intermediate host, oncospheres are released from the eggs and develop into cysticercoids

. The unarmed scolex everts and anchors to the wall of the small intestine, where maturation to the adult stage occurs

. Incidental human infections are believed to occur when the infected arthropod intermediate host is ingested

While the majority of Raillietina spp. infect avian definitive hosts, the three confirmed zoonotic species (R. celebensis, R. demerariensis, R. siriraji) are natural parasites of rodents and not birds. R. celebensis and R. siriraji are primarily found in peridomestic rats (Rattus norvegicus and R. rattus), and also some other Southeast Asian murid rodents. R. demerariensis has been found in various Neotropical rodents and occasionally in monkeys.

Inermicapsifer madagascariensis occurs across sub-Saharan Africa (including Madagascar and Mauritius), and in Cuba. The synonym “I. cubensis” was once used to refer to Cuban specimens, which were later shown to be indistinguishable from African specimens, suggesting a possible introduction to the island. Modern studies on the occurrence of I. madagascariensis are scarce.

Most cases are probably asymptomatic, and it is mainly the presence of white, motile proglottids in the stool that prompts clinical attention. Mild gastrointestinal disturbances and weight loss that resolves following treatment have been documented in known cases. Nearly all known cases have been in young children.

Adult Inermicapsifer madagascariensis measure 24—42 cm long and 3 mm wide with up to about 360 proglottids. The unarmed scolex is small and round with four simple suckers. The unilateral genital pore opens in the middle of the lateral margin of the proglottids (versus similar Raillietina spp., which open in the anterior quadrant). Gravid proglottids shed in feces are rounded, white, and usually motile. They are filled with egg capsules, creating a “mosaic” or reticulated appearance when examined microscopically. Egg capsules are roughly polygonal with a transparent outer portion and a darker center, and contain 4—15 individual eggs. 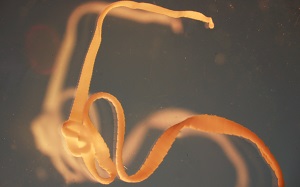 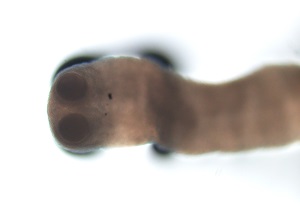 Figure B: Scolex of I. madagascariensis (0.45 mm wide). The absence of a rostellum and hooks distinguishes this species from the otherwise morphologically-similar Raillietina spp. 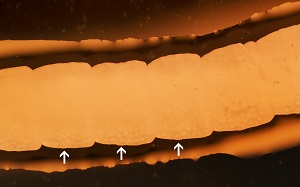 Figure C: Mature proglottids of I. madagascariensis. The unilateral genital pores can sometimes be difficult to distinguish without staining, but may be visible as slight protuberances on the middle of the lateral margin of each proglottid (arrows). . 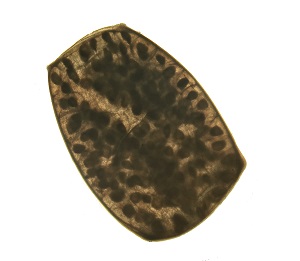 Figure D: Gravid proglottid of I. madagascariensis (~4 mm long). These are typically barrel-shaped and contain abundant egg capsules, creating a distinctive pattern. The genital pore cannot be distinguished in this specimen. 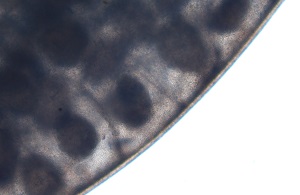 Inermicapsifer spp. egg capsules are roughly polygonal with a transparent outer portion and a darker center, containing 4—15 individual eggs. They are similar in appearance to those of Raillietina spp. 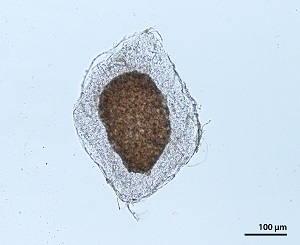 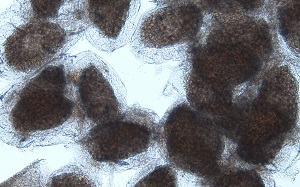 Figure B: Many egg capsules liberated from a gravid proglottid. 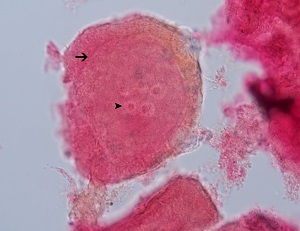 Figure C: Carmine-stained egg capsule of I. madagascariensis freed from proglottid. Note the visible cluster of eggs (dart; 5 in this specimen) and the division of two “zones” (arrow) making up the inner and outer portions of the egg capsule.

Diagnosis of Inermicapsifer madagascariensis is based on the recovery and identification of proglottids, egg capsules, or scolices from the stool. Gravid proglottids and egg capsules closely resemble those of Raillietina spp. Careful examination of the genital pore (enhanced by staining) and number of eggs within capsules may provide some resolution, but requires morphological expertise and the relevant reproductive features may be obscured by the abundant egg capsules in “ripe” proglottids shed in stool. Due to this challenge, the finding of characteristic egg capsules/proglottids in many cases is most appropriately reported as “Inermicapsifer/Raillietina”, in the absence of the abovementioned identifiable discriminatory features.

The scolex, while seldom recovered, provides unequivocal distinction between these two cestodes (armed rostellum in Raillietina; unarmed and arostellar in Inermicapsifer).

Standard precautions for the processing of stool samples apply. Infectious stages of I. madagascariensis are not encountered in laboratory diagnostic settings.