Raillietina is a complex genus of cestodes (family Davaineidae) including hundreds of species described from a wide range of vertebrate hosts. It may cause rare accidental innocuous infections in humans. Most reports of infections in humans are due to R. celebensis and its many synonyms (e.g. R. formosana, R. garrisoni, R. madagascariensis). A few reports of R. demerariensis and R. siriraji also exist. Raillietina spp. can be misidentified as Inermicapsifer madagascariensis. 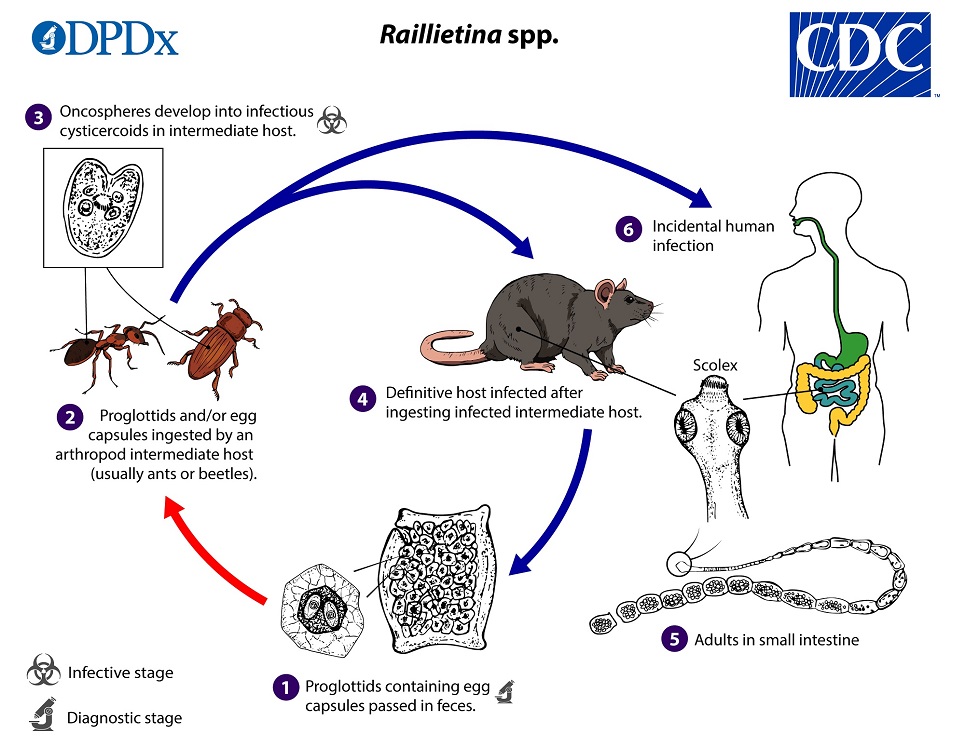 . Arthropod intermediate hosts ingest proglottids or free egg capsules released as the proglottid breaks down in the environment

. Within the intermediate host, oncospheres are released from the eggs and develop into cysticercoids

. The scolex, armed with two rows of hammer-shaped hooks, everts and anchors to the small intestinal wall, where maturation to the adult stage occurs

While the majority of Raillietina spp. infect avian definitive hosts, the three confirmed zoonotic species (R. celebensis, R. demerariensis, R. siriraji) are natural parasites of rodents and not birds. R. celebensis and R. siriraji are primarily found in peridomestic rats (Rattus norvegicus and R. rattus), and also some other Southeast Asian murid rodents. R. demerariensis has been found in various Neotropical rodents and occasionally in monkeys.

Raillietina spp. occur broadly in animal hosts, but it is likely that a limited number of these are zoonotic. R. celebensis and R. siriraji are believed to be exclusive to Asia and the Pacific region. Most known human cases of Raillietina celebensis have occurred in East and Southeast Asia, the Pacific islands, and once in Australia. R. siriraji has been reported exclusively from Thailand. R. demerariensis is a New World species, with cases described from isolated pockets in South America (primarily Ecuador), Central America, and the Caribbean.

It is probable that most cases are asymptomatic; the presence of white, motile proglottids in the stool typically prompts clinical attention. However, among published case reports, gastrointestinal disturbances and other vague complaints (e.g. irritability, nausea) have been described. Nearly all known cases have been from young children.

Adult Raillietina measure about 15–60 cm in length, with numerous trapezoidal proglottids which become more round in shape towards the posterior region of the strobila, creating a “beaded” appearance. Gravid proglottids which are shed in the feces are barrel-shaped, measure about 3 mm long, and are filled with egg capsules. The single genital pore is located in the anterior third of the lateral margin, though not readily visible in gravid proglottids. Egg capsules are polygonal in shape and have a transparent exterior zone with a darker interior zone; egg capsules of the known zoonotic species contains 1–4 eggs each. 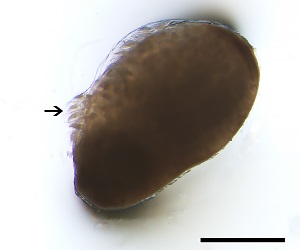 Figure A: Raillietina sp. proglottid from the stool of a human patient in Malaysia (bar = 1 mm). The wall of the proglottid is partially ruptured, revealing egg capsules (arrow). 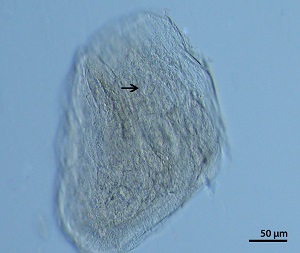 Figure B: Raillietina sp. egg capsule liberated from a proglottid and cleared with lactophenol. One egg containing a six-hooked oncosphere is visible (arrow).

Diagnosis of Raillietina spp. is based on the recovery and identification of proglottids, egg capsules, or scolices from the stool. Gravid proglottids and egg capsules closely resemble those of Inermicapsifer madagascariensis. Careful examination of the genital pore and number of eggs within capsules may provide some resolution of species, but requires morphological expertise. The relevant reproductive features may be obscured by the abundant egg capsules in “ripe” proglottids shed in stool. Due to this challenge, the finding of only the characteristic egg capsules/proglottids in many cases is most appropriately reported as “Inermicapsifer/Raillietina”, in the absence of the abovementioned identifiable discriminatory features.

Standard precautions for the processing of stool samples apply. Infectious stages of Raillietina spp. are not encountered in laboratory diagnostic settings.