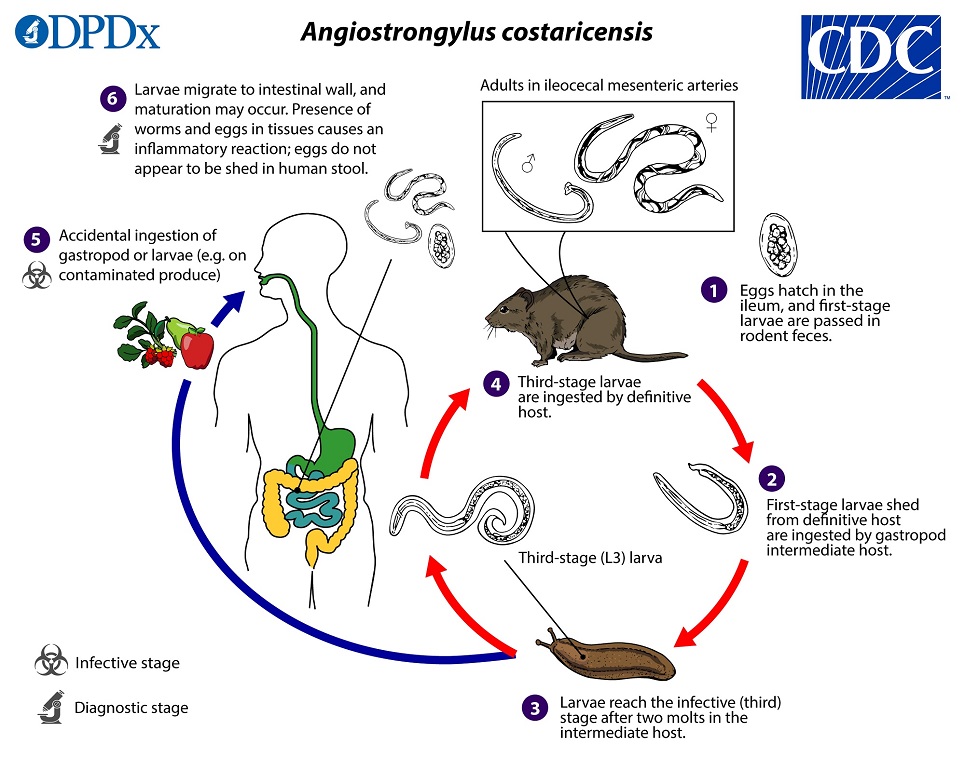 . When the gastropod is ingested by the definitive host, the  L3 larvae migrate to the lymphatic vessels of the abdominal cavity and develop into adults

.  Some L3 larvae may also be shed into the environment by snails via slime trails, though it is not known if ingestion of these larvae represents a major transmission route. These young adults then migrate from the lymphatics to the mesenteric arteries, where they become sexually mature, approximately 24 days after larvae are ingested. Humans become infected by eating raw or undercooked gastropods that contain third-stage larvae or by eating  food items contaminated with gastropod tissue or perhaps larvae shed in slime

The clinical manifestations of abdominal angiostrongyliasis (A. costaricensis infection) arise from the parasite’s  invasion of the gastrointestinal wall, and may mimic those of other conditions, such as appendicitis, Crohn’s disease, or Meckel’s diverticulum. Eosinophilia is commonly noted. Intestinal obstruction, perforation, and other complications may occur, as may ectopic infection (e.g., in the liver).

In humans, Angiostrongylus eggs and larvae remain sequestered in tissues and do not appear to be excreted in stool. A. costaricensis infections are predominantly abdominal; both eggs and larvae (occasionally adult worms) can be identified in biopsy or surgical specimens of intestinal tissue, where the eggs and larvae typically are engulfed in giant cells and/or granulomas.

The larvae of A. costaricensis in tissue sections need to be distinguished from larvae of Strongyloides  . A. costaricensis first-stage (L1) larvae tend to be slightly smaller in diameter than S. stercoralis third-stage (L3) larvae and have single lateral alae, whereas S. stercoraliss L3 larvae have minute double lateral alae. The alae can be difficult to discern in most histologic sections. However, the presence of granulomas containing thin-shelled eggs and/or larvae generally serves to distinguish A. costaricensis infections from Strongyloides infections. 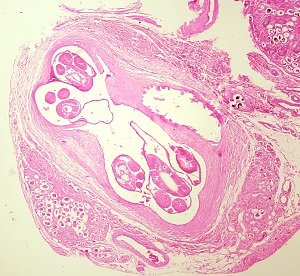 Figure A: Angiostrongylus costaricensis adults and eggs in intestinal tissue stained with hematoxylin and eosin (H&E). This specimen is from a naturally infected hispid cotton rat in Costa Rica. 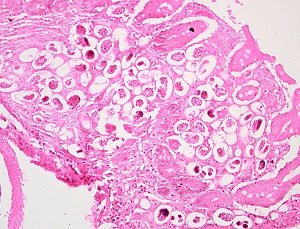 Figure B: Thin-shelled A. costaricensis eggs in intestinal tissue stained with H&E from the same specimen as Figure A, higher magnification. Note the varying stages of larval development. 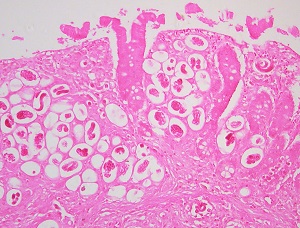 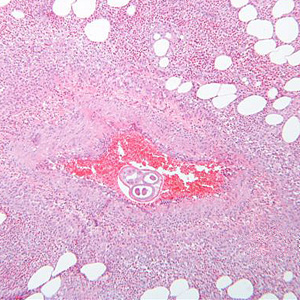 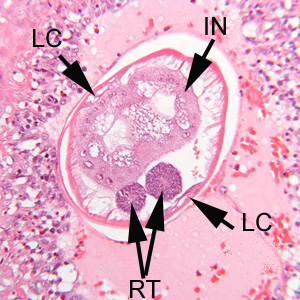 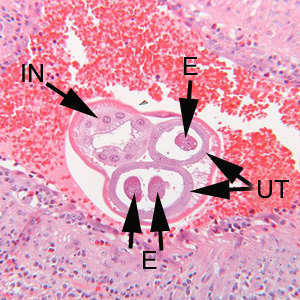 Figure B: Higher magnification of the specimen in Figure A. Notice the thick, multinucleate intestine (IN) and eggs (EG) within the uterus (UT). 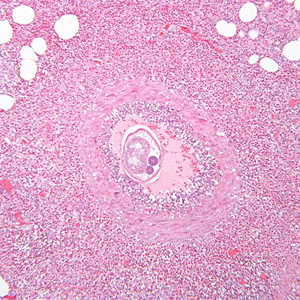 Figure C: Another image from the specimen seen in Figure A.

Diagnosis of abdominal angiostrongyliasis (A. costaricensis infection) is based on finding eggs, larvae, or adult worms in histologic sections. The patient’s travel/exposure history may prompt consideration of the diagnosis.

Standard precautions for the examination of histologic sections apply. Infectious L3 larvae are not encountered in a diagnostic laboratory setting.