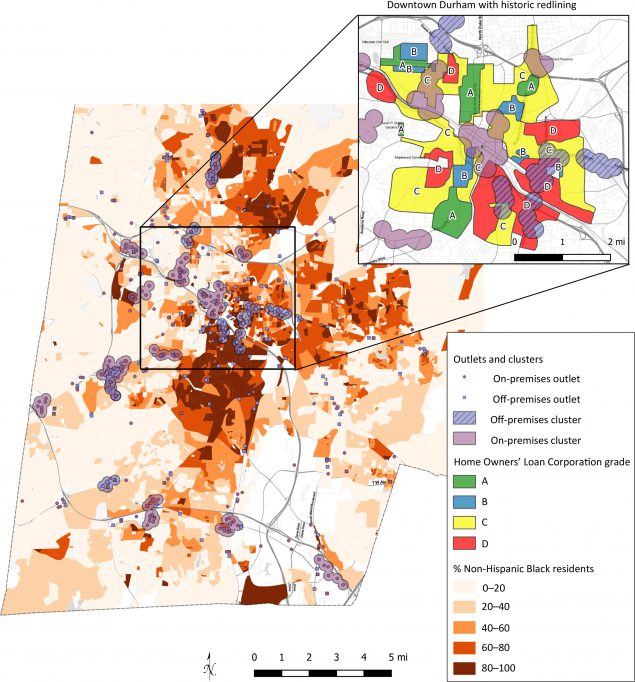 Excessive alcohol consumption is responsible for more than 95,000 deaths in the US each year (1). Policies limiting high densities of alcohol outlets (places where alcohol can be sold or consumed) can curb excessive alcohol consumption (2). Denser alcohol environments are associated with multiple chronic disease pathways (3), neighborhood-level social effects (4), and increased rates of alcohol-related morbidities and mortalities, such as from motor vehicle crashes, pedestrian injuries, and various types of violence (5).

Community partners in Durham County, North Carolina, explored the alcohol and tobacco exposure environment during community-wide conversations about gentrification and neighborhood change (6), laying the groundwork for our study. Given the community context and the role of racism as a fundamental cause of health disparities (7), we supplemented the community-led analysis of racial and ethnic disparities with measures of spatial access and distance to the nearest alcohol outlet. After conversations with community partners, we contextualized these metrics by using maps to emphasize spatial associations of historic racial disenfranchisement and present-day alcohol outlet clusters.

Using the Centers for Disease Control and Prevention (CDC) publication, Guide for Measuring Alcohol Outlet Density (8), Zhang et al identified outlet clusters in Atlanta, Georgia, and found that reducing outlet density was associated with reductions in violent incidents (9). We expanded on that study by using alcohol outlet density metrics (spatial access index, minimum distance) to describe racial and ethnic disparities in the alcohol outlet environment in the city of Durham, North Carolina. We report on-premises (eg, sit-down restaurant) and off-premises (eg, liquor store or gas station) results separately because off-premises settings carry unique and increased population health harms (10). Durham is the name of both a North Carolina county and the largest city within that county. Hereafter, Durham refers to the county, except when stated otherwise.

We derived alcohol outlet locations in Durham from the North Carolina Alcoholic Beverage Control license database for 2007 through 2017, representing over 165,000 outlet licenses of more than 60 permit types. Permits were filtered to 38 types of alcohol outlets that sell to individuals, excluding catering, shipping, and wholesalers.

Distances between populations and outlets were calculated by Euclidean (ie, straight line) methods, because of the ease of communication and because it is unclear whether relationships of alcohol outlets and populations operate by driving along roads in a smaller, walkable city. Distance-to-nearest-outlet calculations reached outside of county boundaries to maintain accuracy for residents living near borders (eg, when a Durham resident’s nearest outlet was in a neighboring county). A spatial outlet cluster was defined similarly to that in the Zhang study (9) but with parameters modified for a smaller city context. After comparing the Durham context to Atlanta, we defined clusters on the basis of an overlapping 0.15-mile radius (ie, spatial buffer) around outlets active on January 1, 2017. Clusters were those overlapping areas with at least 5 outlets for both premise types. This method yielded 8 off-premises clusters and 12 on-premises clusters in 2017.

Population data were derived from block group estimates of the 5-year 2017 American Community Survey (https://www.census.gov/programs-surveys/acs). These estimates were distributed into smaller US Census block centroids (center point of shape) for increased accuracy in distance calculations using the 2010, 10-year census block and block group population proportions. Combined race and ethnicity data from the US Census Bureau were used to calculate aggregate demographic-specific outlet density measures. We acknowledge limitations to this approach for measuring disparities, including not having distinct categories for some racial and ethnic groups, such as Hispanic populations including Latino speakers of other languages. Average measures of spatial exposure access (inverse distance-to-nearest 7 outlets) and minimum distance were stratified by race and ethnicity. Home Owners’ Loan Corporation (HOLC) redlining maps and spatial polygons for Durham in the 1930s were gathered from the Richmond University Mapping Inequality project (11) to contextualize disparities.

Statistical analysis was performed in R (12) with some spatial visualization completed in QGIS (13); both are free and open-source software.

Adverse effects of alcohol uniquely burden communities of color (14). Partial explanations might be multigenerational effects of planning and zoning, resource distribution, neighborhood investment decisions, and access to and use of health care. The effects of historical redlining, a widespread practice in the 1930s of denying home loans and underinvesting in Black neighborhoods, might still contribute to health disparities observed in communities of color. Although evidence is mounting on the relationship of redlining to present-day health disparities, some authors suggest it is understudied (15). During the 1930s and 1940s, banks drew maps of major cities for the purpose of loan planning. Maps were labeled in colors, with some areas grade A (best, traditionally colored in green), grade B (still desirable, colored in blue), grade C (declining, colored in yellow), and grade D (hazardous, in red). We followed this traditional color scheme on our map.

HOLC typically marked Black neighborhoods as grade D. This systematized a process of denying housing loans in Black neighborhoods, which blocked Black residents’ access to capital and equity building through homeownership. This perpetuated a cycle of lower wealth accumulation in Black communities, underinvestment by businesses and government, and racial segregation. Redlining, therefore, could be expected to both lead to a present-day concentration of Black residents (if the area had not been recently gentrified) and unique vulnerabilities to undesirable land use patterns and businesses.

Although novel behavior-level interventions exist (16,17), the Community Preventive Services Task Force (18) has recommended evidence-based interventions, including increasing both the price of alcohol and dram shop (eg, bars, pubs, taverns) liability laws, that may be applied at the population level. Population-level surveillance of alcohol outlet density may inform local interest groups, policy makers, and others interested in preventing excessive alcohol use and racial and ethnic disparities related to the availability and accessibility of alcohol. Combining maps and measures of present-day disparity and historical spatial associations may promote deeper, more meaningful discussion among groups. Redlining map archives of many large US cities are freely available online (11).

We encourage researchers not only to calculate overall alcohol outlet density but also to stratify density and disparity calculations by on-premises restaurant districts and off-premises settings. If these settings are combined, calculations may unintentionally hide meaningful disparities in outlet density exposures that may contribute to subsequent disparities in health outcomes.

We thank our community partners at Together for Resilient Youth and our colleagues at North Carolina Alcoholic Beverage and Control for data sharing. No copyrighted materials or tools were used in this report.

a Demographic data derived from block group estimates of the 2017 5-year American Community Survey (https://www.census.gov/programs-surveys/acs).
b Total includes other races and ethnicities besides the 3 listed, so total counts and percentages do not add to 100.
c Generalized linear model estimates (95% CI) are outside the premises-specific range.