On This Page
Summary

What is already known on this topic?

Previous literature confirmed a positive association between clusters of fast-food restaurants around schools and obesity rates of school children. Few studies about fast-food clustering around schools have been conducted in a high-density urban setting such as Hong Kong.

Students in some areas may have a disproportionate share of health problems caused by an obesogenic environment. Observed clusters of fast-food restaurants in Hong Kong can alert policy makers to design effective interventions targeting the secondary schools located in such environments.

Fast-food restaurants were substantially clustered around secondary schools in Hong Kong. Territory-wide studies about the health effect of fast-food clusters around schools on children and adolescents are warranted in Hong Kong.

Childhood obesity is a major public health problem in both developed and developing countries (1). In 2015, a total of 107.7 million children were obese across the world, and the rate of increase among children exceeded that among adults (2). The long-term physiological and psychological consequences of obesity include an increased risk of type 2 diabetes, high blood pressure, high cholesterol, fatty liver disease, adverse cardiovascular outcomes, low self-esteem, anxiety, depression, bullying, and stigma, which are likely to persist into adulthood (3–6).

The World Health Organization warned that excessive consumption of a high-fat diet is associated with childhood obesity (7). Fast food is one of the dominant food types constituting a high-fat diet. The consequences of fast-food consumption on children’s dietary intake are serious. Compared with nonconsumers of fast food, children who consume fast food were found to have higher intakes of total energy, total fat, saturated fat, and sugar and lower intakes of fiber, fruit, vegetables, and milk (8). In the long run, frequent fast-food consumption among children was associated with a higher body mass index (BMI), higher body fat percentage, and increased odds of being obese (9).

The school food environment is an important factor in shaping children’s food choices, along with other factors, such as levels of physical activity, caregivers’ income, and social and cultural knowledge and attitudes (10). The rapid expansion of Western fast-food restaurants in urban environments in high-income countries and their increased availability, accessibility, and affordability are associated with the emergence of childhood obesity (11). One study found that children with more fast-food restaurants in their school neighborhoods ate more fast-food meals per week (12). Public health and nutrition professionals recommend various school-based dietary interventions (eg, school lunch programs and nutrition education) to mitigate childhood obesity; such interventions can reduce BMI and the prevalence of childhood obesity (13).

School-based dietary intervention programs are not always effective. In Hong Kong, although most primary schools have dietary intervention programs, secondary school students (particularly seniors) often enjoy having lunch at nearby restaurants. The food choices of secondary school students are often driven by accessibility, availability, affordability, acceptability (eg, perception of their school’s food), and attitudes concerning food (14). In Hong Kong, Western fast-food is perceived as “cool” by young people, who also praise its taste, appeal, affordability, and quickness (14–16). In addition, Hong Kong’s hyper-dense urban nature gives students an additional benefit — proximity — to fast-food restaurants. The proximity of fast-food restaurants to secondary schools is a crucial factor in determining the daily food choices of students. The overall overweight and obesity rate among secondary school students in Hong Kong increased from 18.2% in school year 2009–2010 to 19.9% in 2018–2019 (17). Nearly 1 in 5 secondary students is overweight or has obesity (17). 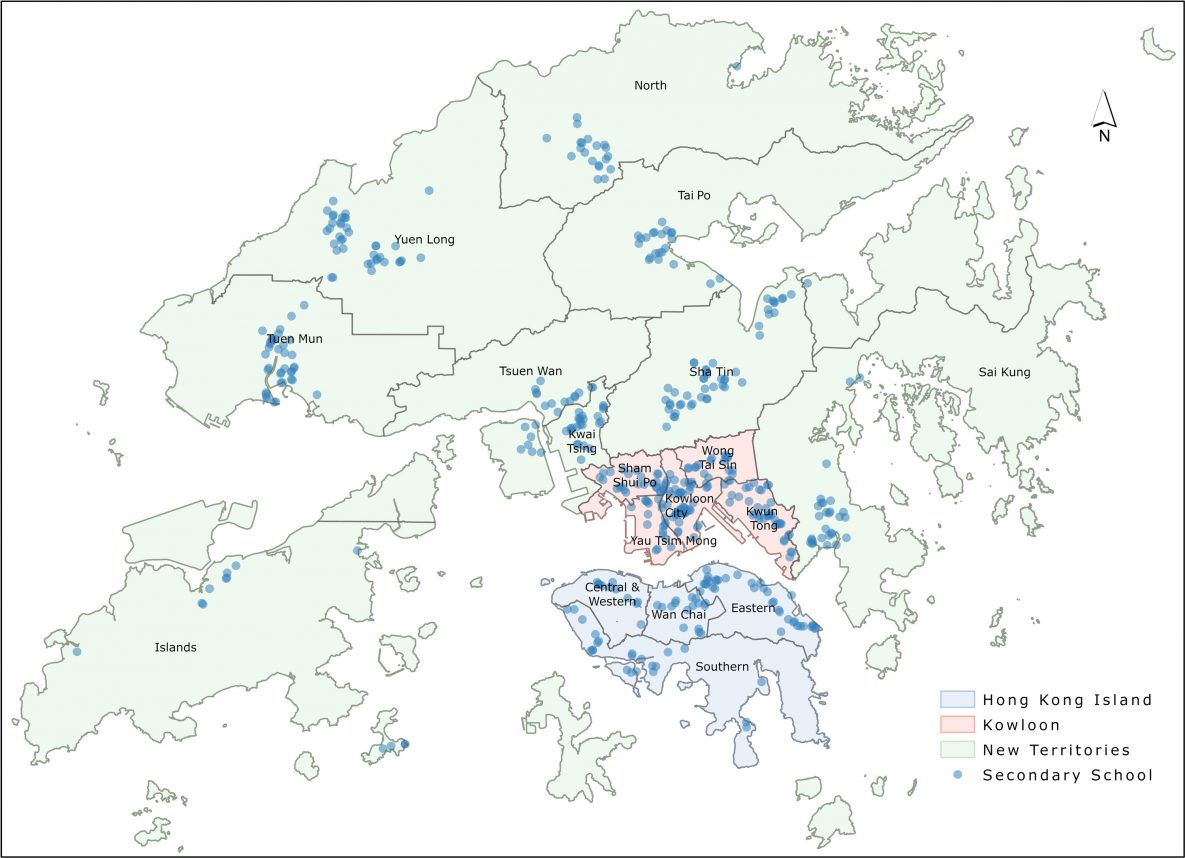 Figure 1.
The location of 490 secondary schools in 3 regions and 18 districts in Hong Kong. [A text version of this map is also available.]

Fast-food restaurant data. We compiled the latest list of fast-food restaurants in Hong Kong in July 2020 from a popular and comprehensive website for food and restaurant reviews in Hong Kong, OpenRice (www.openrice.com). We searched the OpenRice fast-food category for the names of major, if not all, Western fast-food chain restaurants (ie, restaurants that quickly serve food such as hamburgers, French fries, fried chicken, submarine sandwiches, and pizza). The 15 fast-food chain restaurants included in the analysis were Burger Circus, Burger Home, Burger King, Burgerman, BurgerRoom, Five Guys, Jollibee, KFC, McDonald’s, Moo-Moo, Mos Burger, Popeyes, Subway, Texas Burger, and The Big Bite. We excluded Hong Kong–style fast-food restaurants (eg, Café de Coral, Maxim’s MX) because they offer many different styles of cuisines (18). We collected up-to-date street addresses from the official website of each fast-food restaurant. We ensured that the restaurants were in business during the time of our analysis (July 2020) and geocoded the street addresses using Google Maps Geocoding Application Programming Interface (API). All records were successfully geocoded. After geocoding, we conducted reverse geocoding to ensure addresses were accurate.

Census data. We collected data on population density and median monthly household income at the district level from the most recent (2016) Hong Kong government census (21,22).

where N is the number of schools; wij is the element in the spatial-weight matrix corresponding to the samples i and j; wij is defined using an inverse distance method; and xi and xj are samples for areas i and j with the mean μ; and

All analyses were carried out by using ArcGIS Pro version 2.4.0 (Esri).

Figure 2.
Hot spot analysis of fast-food restaurants near secondary schools in Hong Kong, by A, region, B, population density, and C, income. [A text version of this figure is also available.]

Furthermore, the number of fast-food restaurants around each secondary school in Hong Kong was higher than the number in Western settings (for example, the US) (26). This phenomenon could be attributable to the density of Hong Kong and its gentrification and redevelopment process in some of the older districts such as Kwun Tong and Kowloon City. We found many fast-food restaurant clusters in those redeveloped districts; thus, appraising accessibility to fast-food is crucial in redevelopment initiatives. The government may need to intensively formulate urban policies (eg, incorporating the concept of healthy eating into redevelopment plans) to mitigate potential health inequalities caused by geographic disparity. In Canada, urban planning policies such as zoning bylaws have been proliferated to ban fast-food restaurants (29). These full or partial bans emerged recently in North America to encourage healthier food options. Hong Kong has lacked zoning regulations or restrictions limiting the placement of fast-food restaurants (18). However, instead of a one-way tough-policy approach, the government could consider adopting the concept of zoning by providing incentives (eg, lower rents for places with more population flow) to reward fast-food restaurants that place their restaurants in a nonschool zone. In the long run, the Hong Kong government should initiate the discussion of zoning regulations for fast-food establishments around schools for long-term sociospatial sustainability, especially targeting the districts undergoing redevelopment.

In the autocorrelation analysis of EatSmart restaurants, our results (ie, no significant clustering of EatSmart restaurants in low-density and middle-density districts) may have been due to the strategic placement of restaurants in downtown areas with more population flow. To combat the pervasive clustering of fast-food restaurants, more EatSmart healthy restaurants located near secondary schools are warranted, especially in nondowntown areas. The EatSmart campaign should be further strengthened by fostering collaborations between the government and the food industry by increasing advertisement of this program and implementing attractive reward mechanisms for participating restaurants.

The government in Hong Kong has also attempted to address the problem of childhood obesity and obesogenic school food environments by launching EatSmart@school.hk, which consists of 3 main components: EatSmart School Accreditation Scheme, Salt Reduction Scheme for School Lunches, and Joyful Fruit Month (30). However, this program focuses only on primary school students. Secondary school students in Hong Kong have received limited support for nutrition intake interventions from the government, and Hong Kong’s public health community has expressed concerns about fast-food exposure among children and adolescents. Our study serves to raise awareness among authorities about food environments around secondary schools in Hong Kong. In the US, the National School Lunch Program was implemented in 1946 to enhance students’ nutritional intake by offering school meals which meet US Department of Agriculture standards: currently, these standards include increasing the number and variety of fruits, vegetables, and whole grains and reducing the intake of trans-fat content and calories (31). This school meal program reduced weight status among school lunch participants, especially among students eligible for subsidies (31). The Hong Kong government could consider formulating a school lunch program with high nutrition standards and subsidizing secondary school students to buy healthy school lunches. Apart from incorporating incentives to encourage students to eat nutritious food for lunch, the government could also initiate policies to lower the appeal of fast food by restricting fast-food advertising in major media channels and holding frequent educational sessions on the consequences of fast-food intake (32,33).

No financial support was received for this study. No copyrighted materials or tools were used in this article. The authors declare no conflicts of interest.