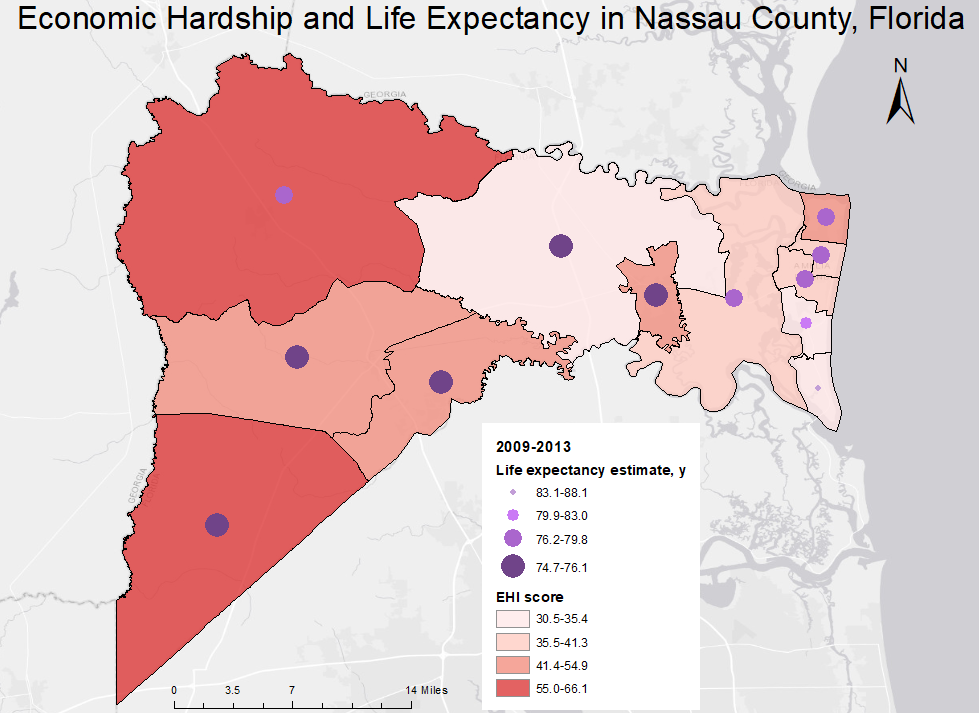 The Economic Hardship Index (EHI) combines 6 social and economic measures to provide a more complete picture of socioeconomic conditions in a community than any one measure alone (1,2). It has the advantage of comprising data that operate at the community level, rather than the individual or family level, and it allows for a comparison of one community relative to another (or itself) over time (3). Socioeconomic conditions in a community are strongly associated with health (4). Economic hardship can affect a person’s ability to access important health care services and lead a healthy lifestyle. Local estimates of life expectancy are useful in understanding the contributions of socioeconomic conditions to population health (2). Life expectancy data allow the examination of health disparities by place, because it reflects the combined effect of major illnesses and injuries and their underlying causes, including social and environmental determinants of health (5).

In response to calls for relevant and timely community-level indicators that address underlying causes of illness and injury and advance health equity, the Florida Department of Health used the EHI to test a bivariate mapping technique that combined data on economic hardship and life expectancy at the census-tract level in Nassau County, Florida. Nassau County is in northeastern Florida along the Atlantic coast. It has a land area of 725.9 square miles and a population of 73,314 (6). The average population per census tract in Nassau County is 5,640 (6).

We used ArcMap 10.3.1 for Desktop (Esri) to join EHI scores and life expectancy estimates to the 2010 census tract shapefile and produce a bivariate map that displays life expectancy as graduated circles and EHI scores as a choropleth map. Each variable was categorized into 4 classes by using the Jenks natural breaks method. We performed correlation analysis in SAS version 9.4 (SAS Institute Inc).

The Florida Department of Health’s Health Equity Program Council (HEPC) Data and Assessment Subcommittee has piloted maps for several counties. These maps were shared with county health administrators and the state health department’s central office staff members who seek to link community-level data to Florida’s State Health Improvement Plan. Linking EHI scores with life expectancy estimates provides county health departments a more complete picture of neighborhood conditions than any one measure alone. The Nassau County map was distributed as part of a press release by the local health department and received news coverage in which residents shared their thoughts on the map and life expectancy disparities in their community. In the news story, community members expressed surprise at the disparities, but they also felt that areas with higher economic hardship were indeed areas of poorer health. We hope this publicity will expand beyond Nassau County and generate more interest in addressing health disparities by using locally relevant data and bivariate mapping techniques.

Financial support was not received for this work.