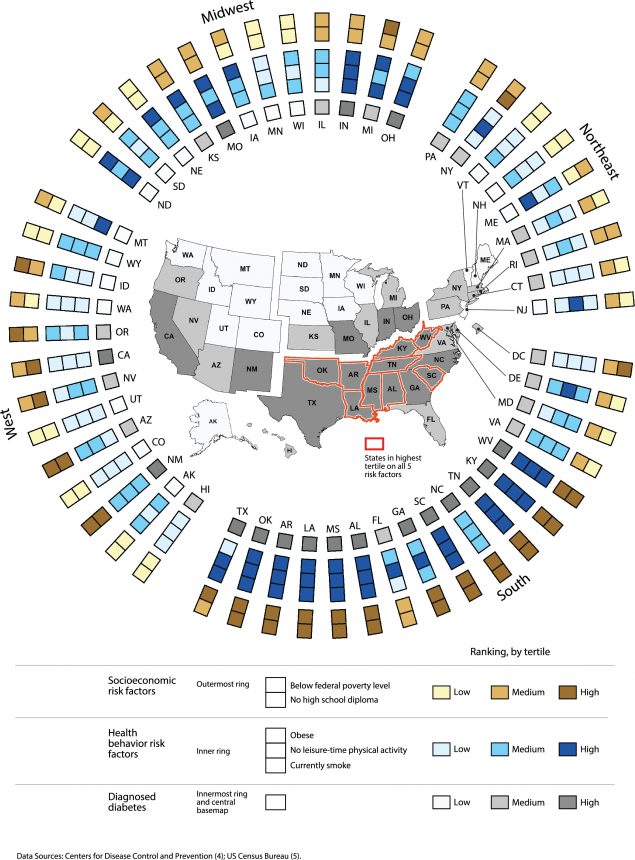 The ring map shows that states with a higher prevalence of risk factors generally have a higher prevalence of diagnosed diabetes. The 9 states in the highest tertile for all 5 risk factors also are in the highest tertile for diabetes prevalence. By integrating multiple spatial data elements in a single graphic, the ring map highlights possible state-level associations between diagnosed diabetes prevalence, socioeconomic disadvantage, and health behaviors. All mapped values represent data for adults aged ≥18, except the percentage with no high school diploma, which was measured for adults aged ≥25. [A tabular version of this figure is also available.]

In the United States, diabetes is a leading cause of adult-onset blindness, kidney failure, and death (1). Efforts to prevent and control diabetes must consider geographic variation in disease prevalence and risk factors such as obesity, sedentary lifestyle, and low educational attainment (2). Maps are essential to our understanding of geographic differences in population health and disease vulnerability. Comparing geographic patterns of disease and population risk across multiple maps, however, can be cumbersome. Ring mapping is an innovative geovisualization method that permits the display of multiple spatially referenced variables on a single map (3). We used a ring map to depict the prevalence of diagnosed diabetes and 5 associated risk factors (living below the federal poverty level, low educational attainment, obesity, no leisure-time physical activity, and current smoking) for adults in all 50 US states and the District of Columbia.

We obtained data on the age-adjusted prevalence of diagnosed diabetes, obesity, physical activity, and current smoking among adults aged 18 or older from the Behavioral Risk Factor Surveillance System (4). For these measures, we calculated mean age-adjusted prevalence on the basis of the most recent 3 years of data available (2014–2016). We obtained data on poverty (percentage of adults aged ≥18 below the federal poverty level) and educational attainment (percentage of adults ≥25 with no high school diploma) from the US Census Bureau, American Community Survey, 2015 1-Year Estimates (5).

We constructed a ring map with 2 principal parts: a ring display and a central basemap. The ring display consists of 6 concentric rings, each comprising 51 symbolization units, 1 unit in each ring for each state and the District of Columbia. The 2 outermost rings represent the 2 socioeconomic risk factors; the 3 inner rings, the 3 health behavior risk factors; and the single innermost ring, the prevalence of diagnosed diabetes. The central basemap shows the geographic pattern of diagnosed diabetes prevalence across states; the shade used to depict the prevalence of diagnosed diabetes in each state on the basemap is the same shade used in the innermost ring. Diabetes and risk factor data are symbolized by using a tertile ranking scheme, with approximately equal numbers of observations in low, medium, and high classes. Tertiles were based on the distribution of values for all 50 states and the District of Columbia (Table). Intentional gaps in the rings and basemap indicate the 4 US Census regions, facilitating exploration of potential regional differences in diabetes prevalence and population risk.

This ring map has several limitations. The geovisualization does not indicate the significance of potential associations between the selected risk factors and diabetes prevalence, nor does it convey statistical information about spatial autocorrelation of risk factors and diabetes. Based on state-level data, the ring map does not permit visual assessment of small-area geographic variation in diabetes and population risk within states. Finally, graphic space and legibility constraints limit the number of rings displayed and thus the number of potential risk factors mapped.

This novel geovisualization can help raise public awareness about spatial variability in diabetes prevalence and vulnerability. The striking visual association between the prevalence of diagnosed diabetes and population risk, especially in the South, can inform and motivate state initiatives to address such modifiable risk factors as poverty, obesity, sedentary lifestyle, and smoking. The ring map also might encourage further exploration of additional area-level factors that alone, or in combination, influence diabetes morbidity and mortality, including, racial/ethnic composition (1,7), characteristics of the built environment (3), and state decisions to expand Medicaid (8).

No financial support was received for this work, and no conflicts of interest exist. No copyrighted material was used in this work. The views expressed in this work are solely the responsibility of the authors.