On This Page
Summary

What is already known on this topic?

A few studies in the southeastern United States have identified spatial clusters of suicide at the county and census tract levels.

This study identified spatial clusters of suicide at the census block group level in Idaho, a northwestern rural state.

Because all of Idaho is federally designated as having a shortage of mental health providers, this study will inform stakeholders targeting Idaho communities with disproportionately high suicide rates at a more detailed level.

In 2015, Idaho had the fifth highest suicide rate in the United States. Little is known about the characteristics of areas in Idaho with high suicide rates. To aid suicide prevention efforts in the state, we sought to identify and characterize spatial clusters of suicide.

We obtained population data from the 2010 US Census and the 2010–2014 American Community Survey, analyzed data on suicides from death certificates, and used a discrete Poisson model in SaTScan to identify spatial clusters of suicide. We used logistic regression to examine associations between suicide clustering and population characteristics.

In the United States, suicide is the tenth leading cause of death; more than 44,000 suicides were reported in 2015 (1). From 2000 to 2015, the US age-adjusted suicide rate increased by 28%, from 10.4 per 100,000 population to 13.3 per 100,000 population (2). Suicide results in substantial medical and work-loss costs; lifetime costs were estimated to exceed $56 billion in 2015 (1); this conservative estimate did not account for underreporting of suicides and other societal costs (eg, pain and suffering, justice system). Beyond the economic burden, suicide negatively affects families and community members, who may have long-lasting mental health problems and other life-changing difficulties (3).

Suicide rates vary in the United States by geographic location. During 2011–2015, the age-adjusted suicide rate was higher in the West than in the Northeast (14.0 per 100,000 population [West census region] vs 9.8 per 100,000 population [Northeast census region]) (1). Although suicide rates increased across all levels of urbanization in the United States during 1999–2015, rates were higher in less urban areas than in more urban areas (4). Because geographic differences are not fully explained by demographic patterns (5), they could be attributed to other factors, such as lack of access or poor access to quality mental health care, low socioeconomic status, and weak social cohesion in areas with high suicide rates (6–8). Increased access to lethal means could be another explanatory factor in areas with higher suicide rates (9).

A comprehensive public health approach to suicide prevention, in contrast to an approach that focuses on mental health treatment, can address multiple risk factors across the lifespan (10). Although a public health suicide prevention approach is warranted in communities nationwide (10), it is essential to focus on communities with disproportionately high suicide rates to eliminate geographic disparities and reduce suicide altogether (11,12). Furthermore, examination of suicide data at a fine-scale geographic level is needed to identify these communities for efficient planning and targeting effective prevention efforts, especially when resources are limited.

In Idaho, a northwestern rural state with a population of 1.7 million, suicide is a major public health problem (21). Idaho consistently ranks among the top 10 states with the highest suicide rates, with an age-adjusted suicide rate of 22.2 per 100,000 population, compared with 13.3 per 100,000 population nationally in 2015 (1). Eighteen of 44 counties in Idaho had an age-adjusted suicide rate of 22.0 per 100,000 population or more during 2010–2014 (21). However, these rates are likely unstable because of the small numbers problem (21). Because all of Idaho is federally designated as having a shortage of mental health providers (22), targeting Idaho communities with disproportionately high suicide rates at a more detailed level than the county level (because some counties are very large in area) is crucial. Therefore, we sought to identify and characterize areas with spatial clusters of suicide at the neighborhood level in Idaho. We examined whether there are geographic areas in Idaho that have statistically significant higher rates of suicide than expected, compared with other geographic areas in the state, and we explored their characteristics. For a complete representation of suicide in Idaho, we also described the epidemiology of residents who died by suicide.

We used a retrospective ecological study design to investigate suicides among Idaho residents during 2010–2014. We did not include suicides occurring in Idaho among out-of-state persons, because an objective of our study was to examine the characteristics of communities in which Idaho residents who died by suicide lived at the time of death. We used the census block group as a proxy for neighborhood. A census block group is a statistical division of a census tract that covers a contiguous area and generally has a population size of 600 to 3,000 people, whereas a census tract is a relatively permanent statistical subdivision of a county and generally has a population size of 1,200 to 8,000 people (23). Our study was deemed nonresearch public health practice by the Idaho Division of Public Health’s Research Determination Committee.

We obtained data on population estimates from the 2010 US Census and data on community characteristics from the 2010–2014 American Community Survey’s 5-year estimates (26). We measured the following community characteristics, suggested by previous studies (16–20), in proportions as appropriate: female; median age; American Indian or Alaska Native; Hispanic or Latino; persons never married; persons in single-parent families; persons with less than a high school education (ie, did not receive a regular high school diploma, GED, or alternative credential); unemployed persons, median household income; persons in poverty; persons in renter-occupied housing units; persons with disabilities; and persons with no health insurance. In addition to showing demographic patterns, these characteristics capture dimensions of social cohesion and economic deprivation that could be associated with suicide (16–20).

Using information from death certificates, we first calculated descriptive statistics of residents who died by suicide and stratified these data by sex. We used the Pearson χ2 test for categorical variables (or Fisher exact test for <5 expected cell counts) and t tests for continuous variables. Next, we conducted spatial cluster analysis by using SaTScan version 9.4 (Martin Kulldorff and Information Management Services Inc), free software that uses scan statistics to identify clusters (27). We used the discrete Poisson model (28) to scan for nonoverlapping geographical areas (census block groups) with significantly high rates of suicide. In SaTScan, we used population size (default of 50% of the total population at risk) to specify the maximum spatial cluster size; circular spatial window shape, adjusted for sex and age distributions; and the default of 999 Monte Carlo replications. We selected the spatial clusters with P < .10 for the subsequent analyses. 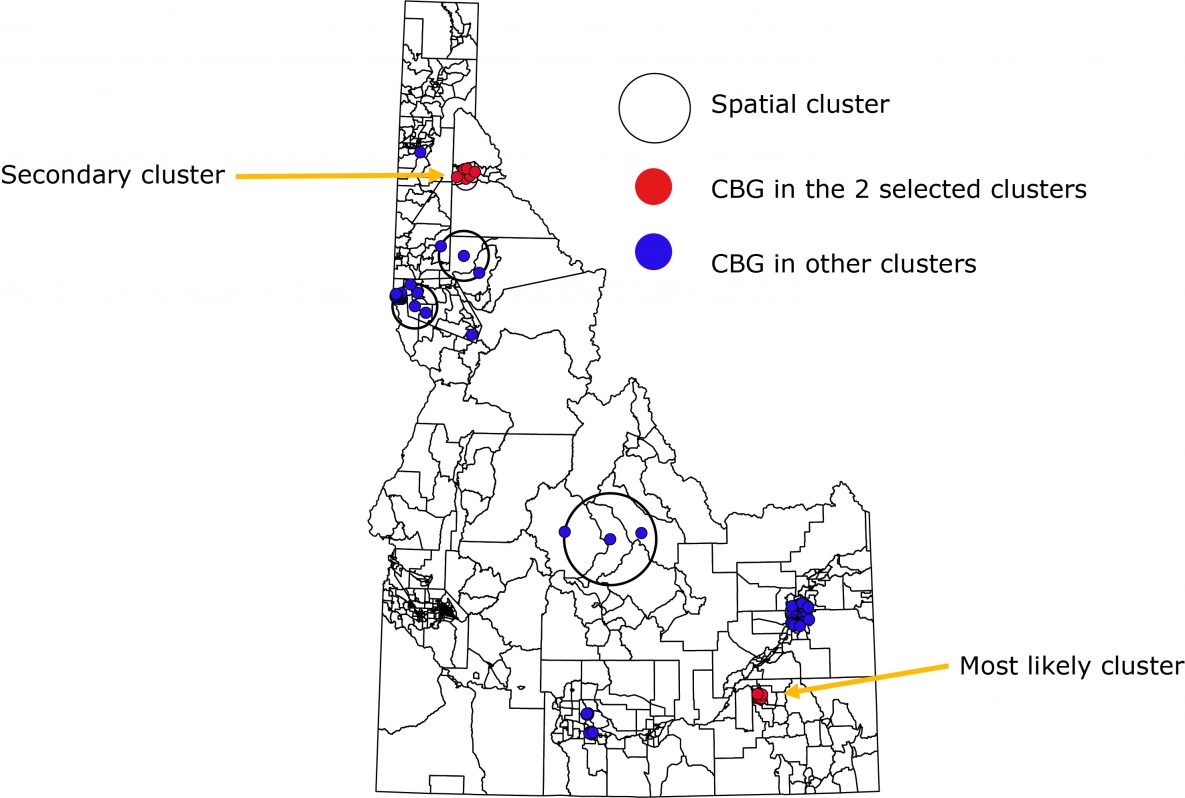 Figure.
Spatial clusters of Idaho resident suicides by census block group, 2010–2014. A dot is a centroid of a census block group (CBG); 1 dot might represent 1 or more suicides that occurred in that CBG during the study period. [A text version of this figure is also available.]

This ecological study identified geographic areas with disproportionately high suicide rates at the census block group level in 2 parts of Idaho. The communities in areas with suicide clustering had a unique demographic and socioeconomic profile. To our knowledge, this is the first study to investigate spatial clustering of suicide in the western region of the United States.

The literature identified 2 possible explanations for suicide clustering. First, concentrations of persons at high risk for suicide might live in areas that could be identified as a cluster (compositional effects) (8). Second, place of residence might influence suicide risk by being less supportive (eg, because of social or economic isolation) of persons at high risk (contextual effect) (8). Our objective was not to investigate causation, and we did not incorporate individual-level data to assess individual risk of suicide after controlling for contextual effect.

Our study demonstrates the feasibility of a state health department investigation of spatial clusters of suicide using multiple data sources. Strengths of this study include the use of population-based suicide data; use of the census block group as a granular, detailed unit of geographic analysis; and consideration of a broad range of community characteristics that covered the same period as the suicides. Spatial cluster analysis using SaTScan has many advantages, including adjusting for population inhomogeneity, adjusting for multiple comparisons, adjusting for covariates, and limiting preselection bias by not specifying cluster size a priori (27).

This study has several limitations. First, incorrectly not classifying suicide as a cause of death on death certification could have resulted in underreporting of suicide. Second, missing information on residential addresses resulted in incomplete geocoding; however, less than 2% of suicides were missing information on residential addresses. Third, we did not have information on how long the decedents lived in their homes; thus, we could not determine how duration of exposure to communities could affect results. Fourth, our cluster analysis was driven by the settings we selected in SaTScan; however, we followed the standard settings and those used in previous studies. Finally, our findings might not reflect current high-risk areas because data were from 2010–2014. However, retrospective analysis of mortality data is a fundamental tool for community health assessment, and we used the most recent available data. Although the contextual factors conducive to suicide in the identified clusters have probably not changed greatly since our study period, continuous evaluation and data triangulation to determine whether high-risk areas remain at high risk over time could increase confidence in public health programs that target prevention efforts to those areas. Although a study from Australia found that historical suicide clusters, detected during a 5-year period, predicted only 36% of suicide clusters detected during a subsequent 5-year period (29), our findings are better suited to inform current planning and response needs of suicide prevention programs rather than to predict future suicides.

Our findings could help public health practitioners and policy makers prioritize resources and target efforts for suicide prevention. The Centers for Disease Control and Prevention developed a technical package of prevention strategies to help communities use the best available evidence for suicide prevention (30). These strategies include strengthening economic supports; strengthening access and delivery of suicide care; creating protective environments; promoting connectedness; teaching coping and problem-solving skills; and identifying and supporting people at risk (30). A multicomponent public health suicide prevention approach should address the needs of communities at the highest risk of suicide, such as communities we found in our study. In Idaho, a public health approach that strengthens economic supports and strengthens access and delivery of suicide care in the identified areas might be most effective in preventing suicide.

The findings and conclusions in this report are those of the authors and do not necessarily represent the official position of the Centers for Disease Control and Prevention. The authors thank Pamela Harder, Division of Public Health, Idaho Department of Health and Welfare, for preparing suicide data for analyses. The authors have no external financial support to disclose. No copyrighted materials, surveys, instruments, or tools were used.

a Individual-level data on suicides obtained from death certificates stored by the Idaho Bureau of Vital Records and Health Statistics.
b The total number of participants for each variable varies because of missing values.
c Based on the Pearson χ2 test or Fisher exact test for categorical variables and t test for continuous variables.
d Did not receive a regular high school diploma, GED, or alternative credential.
e Based on International Classification of Diseases, Tenth Revision (24). No death using the U03.9 ICD-10 code was reported.

a Individual-level data on suicides obtained from death certificates stored by the Idaho Bureau of Vital Records and Health Statistics. Data on population estimates obtained from the 2010 US Census and data on community characteristics from the 2010–2014 American Community Survey’s 5-year estimates (26).
b Adjusted for sex and age.