A Spatial Exploration of Changes in Drug Overdose Mortality in the United States, 2000–2016 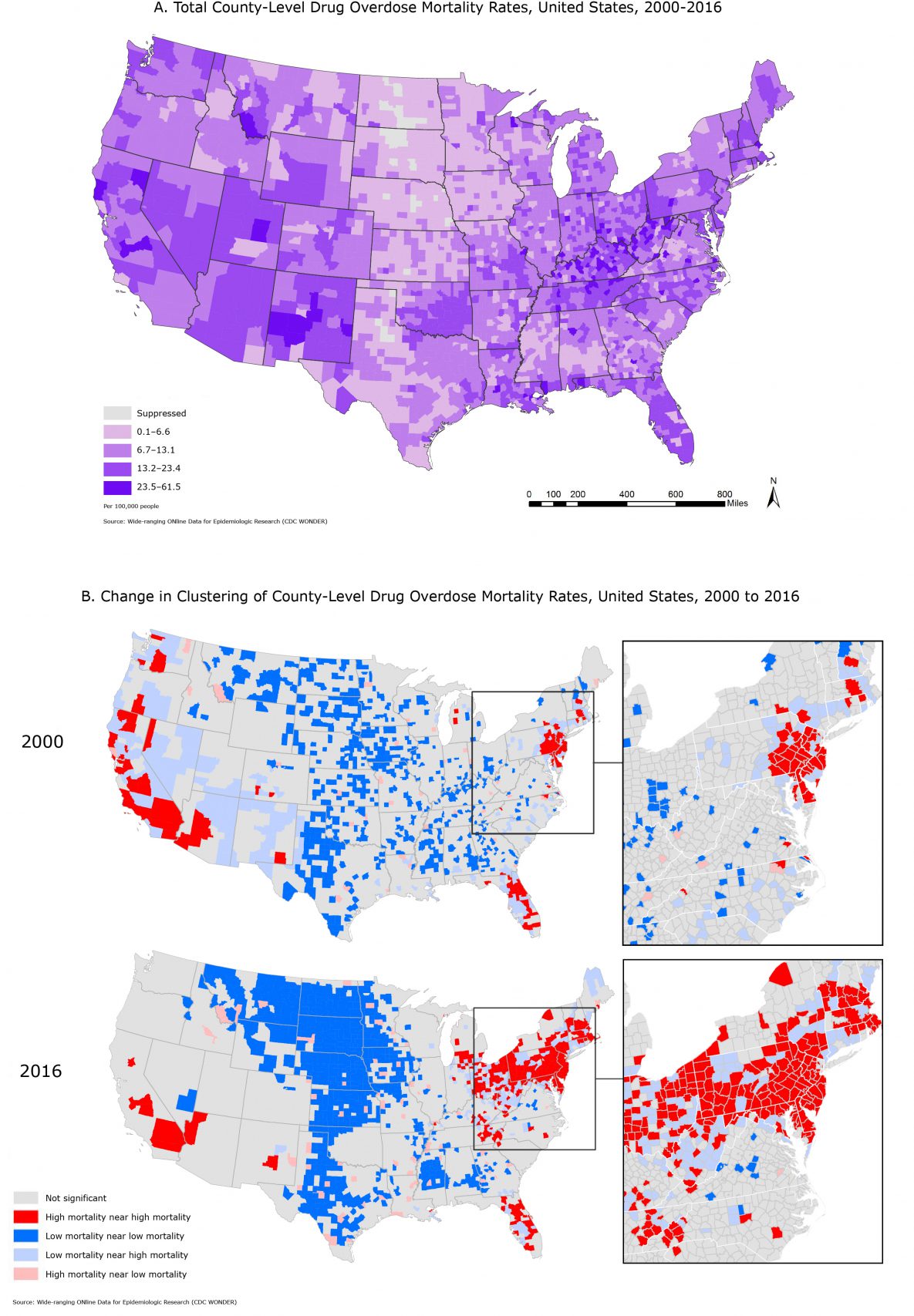 From 2000 to 2014, rates of drug overdose mortality increased by 137% in the United States. By 2014, 61% of these mortalities were due to opioid overdoses, which have tripled since 2000 (1). Within the last decade, increased amounts of fentanyl in drugs, as well as changes in prescription drug use, have drastically affected the geography of this epidemic. Additionally, the rise in heroin overdoses in recent years has shifted the epidemic into cities (2). The Pew Charitable Trusts reported that in 2015, 38% of all renter households were rent burdened (ie, spending 30% or more of pretax income on rent), a 19% increase since 2001, highlighting the increase of economic immobility in America (3). As overdose mortality rates increased, county-level economic distress worsened (2). Examining this shift in overdose mortalities and their potential drivers through a spatial lens can identify at-risk counties.

We used age-adjusted all-drug overdose mortality data at the county level. County-scale data provide more detail than state-scale data. Data came from Wide-ranging ONline Data for Epidemiologic Research (CDC WONDER). CDC WONDER is a public resource developed for research, decision making, and program evaluation (wonder.cdc.gov). To encompass all drug–related deaths, our database comprised International Classification of Diseases, 10th revision (ICD-10) underlying cause-of-death codes for all-drug overdose: X40–44 (unintentional), X60–64 (suicide), X85 (homicide), or Y10–Y14 (undetermined intent) based on the Substance Abuse and Mental Health Services Administration and CDC WONDER (4,5). We obtained American Community Survey data on the percentage of renter-occupied housing units whose gross rent as a percentage of household income was greater than or equal to 50% (https://factfinder.census.gov/faces/nav/jsf/pages/download_center.xhtml). This variable, referred to as rent burden, was selected as a proxy for economic distress (4,6). We examined spatial trends in age-adjusted overdose mortality rates by using univariate, bivariate, and differential Moran’s I at both the global and local levels. Using the software GeoDa 1.12 and R 3.2, these methods test for spatial autocorrelation, a measure of clustering of a variable with itself or other variables in space (univariate and bivariate) and/or time (differential). Global analyses determine if significant clustering is occurring across the entire study area, and local analyses identify specific locations that clustering is occurring. Moran’s I values with a P < .05 were deemed significant.

Local Moran’s I tests indicated that both high mortality clusters and high–low clusters (areas of high mortality around areas of low mortality) increased from 2000 to 2016 (Table). Univariate Moran’s I showed a moderately strong (I approximately > 0.1) significant spatial clustering pattern of 2000, 2010, 2014 and 2016 age-adjusted mortality rates (P < .05 for all tests). Bivariate Moran’s I using mortality rates and rent burden data also showed significant clustering, which nearly doubled in magnitude from 2010 to 2016 (Table). Differential Moran’s I highlighted a growth of significant clustering from 2000 to 2016.

These maps highlight the overall pattern (Map A) and geographic shift in the drug overdose epidemic, highlighting regions with increases in high mortality rates over the past decade (Map B). Clusters of high mortality rates are expanding into neighboring areas of low mortality rates over time and areas of high rent burden (2). Results of this analysis indicate a changing landscape in the drug overdose epidemic over space and time. This finding is not evident when looking at overall age-adjusted rates for the period. By spatially identifying areas of potential risk, our findings suggest the use of geographic information systems (GIS) to identify locations for preventive interventions and targeting resources at the county level. Lawmakers should target highly rent-burdened neighborhoods in counties with significantly high mortality. We suggest implementing known effective interventions in these counties. Interventions include increased first-responder access to naloxone, establishing supervised injection facilities and substance abuse treatment facilities including Medication-Assisted Treatment (MAT), and increased support for state-run prescription drug monitoring programs. GIS can be used to understand trends in location-based prescription rates and health outcomes, to understand infrastructural and social barriers to treatment access, and to prioritize resources for geographically targeted policy, education, and treatment interventions. Because of the rapid increase of overdose rates in the last 2 decades and limited resources, we must target prevention strategies to counties where spatial analyses have forecasted future high overdose mortality rates.

Gery Guy and Rose Rudd of National Center for Injury Prevention and Control, Centers for Disease Control and Prevention provided subject matter expertise. No financial support was received and no copyrighted materials were used. Publicly available copyrighted GeoDa software were used in this analysis.