Methods
We conducted a community-based longitudinal study to evaluate the impact of changes in alcohol outlet density on violent crime in Buckhead compared with 2 other cluster areas in Atlanta (Midtown and Downtown) with high densities of alcohol outlets, from 1997 through 2002 (preintervention) to 2003 through 2007 (postintervention). The relationship between exposures to on-premises retail alcohol outlets and violent crime were assessed by using annual spatially defined indices at the census block level. Multilevel regression models were used to evaluate the relationship between changes in exposure to on-premises alcohol outlets and violent crime while controlling for potential census block-level confounders.

A reduction in alcohol outlet density in Buckhead, an affluent mixed (residential and commercial) neighborhood in northeast Atlanta with a high clustering of on-premises alcohol outlets (ie, bars and clubs), provided an opportunity to assess the relationship between an observed substantial reduction in alcohol outlet density and violent crime. After a period of significant growth in the number of on-premises retail alcohol outlets and several high-profile homicides and assaults in Buckhead during the 1990s, community residents requested that the Atlanta mayor and city council establish and enforce restrictions on retail sales of alcohol in Buckhead. Many of these restrictions were consistent with CPSTF recommendations for preventing excessive alcohol consumption and related harms (8) and included restricting the hours when alcohol could be sold (18) and enforcing laws prohibiting alcohol sales to minors (19). These changes in the retail alcohol sales environment occurred before or were coincident with the closure of many on-premises alcohol outlets in Buckhead and occurred before the sale of these properties for development as residential and retail space (20–27).

The purpose of this study was to assess whether the observed reduction in the density of alcohol outlets in Buckhead was associated with a reduced exposure to violent crime during the same period.

A community-based longitudinal study was conducted to evaluate the impact of changes in alcohol outlet density on violent crime in the intervention area, Buckhead, compared with the 2 control areas, Midtown and Downtown, which also had high clusters of alcohol outlets (ie, a large number of on-premises alcohol outlets located in a small geographic area), from 1997 through 2007. This block-level analysis allowed for a precise assessment of the environmental impact of changes in alcohol outlet density on exposure to violent crime and thus the safety of various neighborhoods independent of whether the people living in the neighborhoods had themselves experienced violent crime. Many changes in the alcohol retail sales environment in the Buckhead area occurred during or before 2003; therefore, the preintervention period was defined as from 1997 through 2002, and the postintervention period as from 2003 through 2007. This period was selected to capture the increase in alcohol outlet density that occurred before 2003, the decrease that occurred between 2003 and 2007, and the effect these changes had on violent crime. This study was exempt from internal review board approval because personal identifiers were not included in the data provided to the Georgia Department of Public Health and the Centers for Disease Control and Prevention (CDC).

Alcohol licensure data for retail alcohol establishments in Atlanta from 1997 through 2007 were obtained from the Georgia Department of Revenue. These data included the type of establishment (ie, on-premises vs off-premises) and street address. Data for Federal Bureau of Investigation (FBI) class I violent crimes — including homicide, rape, robbery, and aggravated assault — that occurred from 1997 through 2007 were obtained from the Atlanta Police Department . These data included type, date, time, and location (street address) of the crime. On-premises retail alcohol outlets and violent crimes were geocoded by the Georgia Department of Public Health using Centrus Desktop version 4.1 (Pitney Bowes Co).

Demographic information on age (0–14 y, 15–34 y, ≥ 35 y), sex, race/ethnicity (% white, black, Hispanic, other), and poverty rate (% living below the federal poverty level) of Atlanta residents were obtained at the census block group level from the US 2000 Census. High, medium, and low poverty census blocks corresponded to areas where more than 34.4% (fourth quartile), more than 8.1% to no more than 34.4% (second and third quartiles), and 8.1% or less (first quartile) of the residents lived in households with incomes below the federal poverty level.

Based on an exploratory spatial analysis, more than 90% of the on-premises retail alcohol outlets in Atlanta were located within 0.1 mile of another outlet; therefore, this distance was used to create a buffer around each outlet throughout the city. Overlapping buffers were merged into larger alcohol outlet clusters if the distance between them was 0.1 mile or less. High-density clusters of alcohol outlets were defined as areas that contained 50 or more on-premises retail alcohol outlets located within 0.1 mile or less of at least 1 other retail alcohol establishment. Buckhead (0.90 square miles), Midtown (0.95 square miles), and Downtown (1.09 square miles) Atlanta were identified as having high-density clusters of alcohol outlets (Figure 1). All census blocks in the 3 high-density clusters were included in this study: 35 in Buckhead, 109 in Midtown, and 210 in Downtown. Because these 3 areas were defined on the basis of density and spatial considerations only, they did not necessarily correspond to established administrative boundaries that might be used elsewhere. 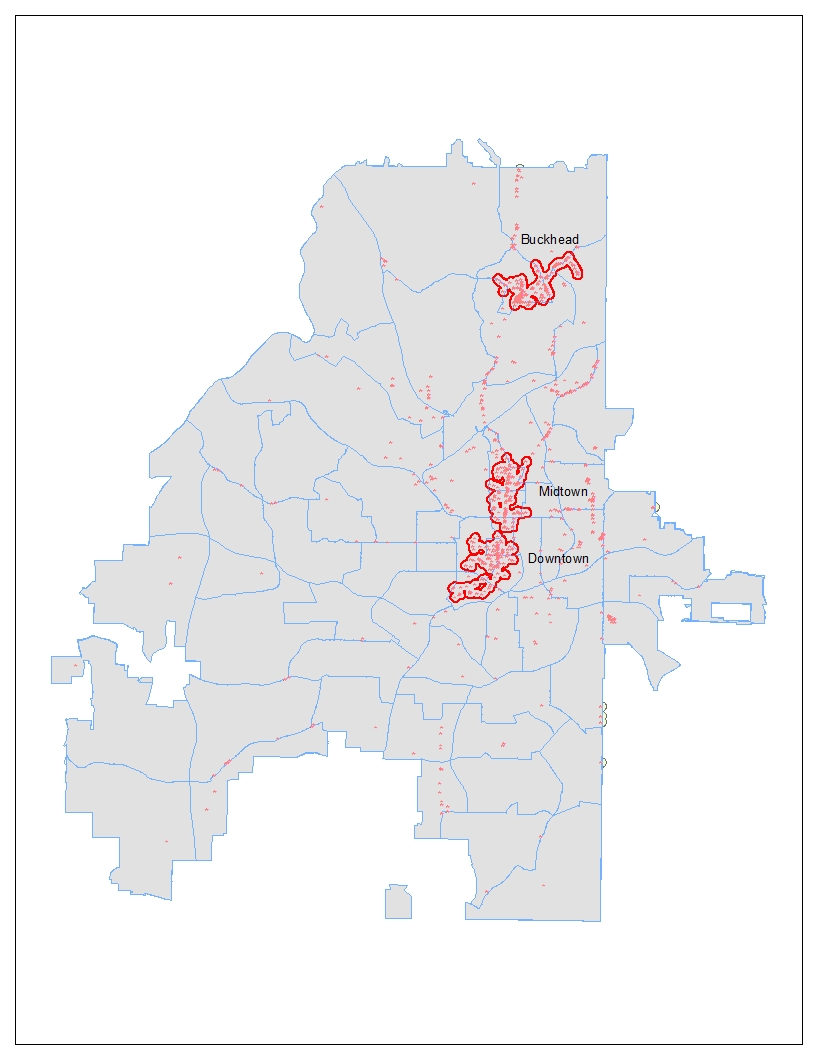 Figure 1. On-premises alcohol outlets and cluster zones in Atlanta, GA, 1997–2007. [A text version of this figure is available.]

Map of the City of Atlanta showing the geographic distribution of on-premises alcohol outlets and cluster zones. On-premises outlets are highly clustered in 3 Atlanta neighborhoods: Buckhead, Downtown, and Midtown.

Consistent with the changes in the number of on-premises outlets, the annual alcohol outlet exposure index in Buckhead initially increased during the preintervention period from 1997 through 2002, remained constant during the early part of the intervention period, and began to decrease from 2003 through 2007, resulting in an overall decline of 6.8% during the study period (Figure 2), with the greatest decline occurring after 2003. In contrast, the alcohol outlet exposure index consistently increased throughout the study period in both control clusters, resulting in an overall increase of 24.4% in Midtown and 35.2% in Downtown. The relative change in the alcohol outlet exposure index from the preintervention (1997–2002) to postintervention (2003–2007) periods was −3.2% in Buckhead, 12.1% in Midtown, and 12.4% in Downtown.

The stronger association between exposure to retail alcohol outlets and violent crime in the Buckhead area than in the Midtown and Downtown areas is probably due to the higher alcohol outlet exposure index in Buckhead than in either of these 2 control clusters throughout the study period. High alcohol outlet-density is an environmental risk factor for excessive alcohol consumption, which is a risk factor for interpersonal violence (29,30). In addition, high alcohol outlet density can aggregate excessive drinkers in a small geographic area, further increasing the risk of interpersonal violence. High alcohol outlet density can also increase competition between alcohol retailers, leading to more aggressive alcohol marketing, including volume discounts and point-of-purchase alcohol advertising, which can further increase the risk of excessive alcohol use (30).

Our study focused on neighborhoods that were directly exposed to high concentrations of retail alcohol outlets, which had the greatest potential for exposure to harm that could be related to it (eg, interpersonal violence). This approach also improved the sensitivity and precision of our analysis by allowing us to control for factors that may differentiate areas with high alcohol outlet density from other areas in the city (ie, to select areas with increased alcohol consumption, increased visitors and traffic, and increased law enforcement). This study design also avoided the classic “container-based approach” that can occur when analyzing alcohol outlet density and violent crime by using convenient or prescribed geographic units (eg, census tracts, zip codes, police zones, neighborhood planning units), which may not take into account the uneven distribution of these exposures in neighborhoods, and consequently hide areas with high alcohol outlet density and violent crime that cross geopolitical boundaries.

This article is dedicated to Marsha Brinkley for her leadership in the prevention of excessive alcohol use and for her assistance in conducting this study. The authors also thank Dwayne Jarman, DVM, MPH, and John Horan, MD, MPH, for their help in initiating this study. Bonnie Hatcher was supported by the Applied Epidemiology Fellowship Program administered by the Council of State and Territorial Epidemiologists and funded by CDC cooperative agreement no. U60/CCU007277. Her position was also partially funded by the Alcohol Program in the National Center for Chronic Disease Prevention and Health Promotion of CDC and by a generous grant from the Robert Wood Johnson Foundation to the CDC Foundation.