Information Needed to Identify High Risk Areas During an Outbreak

Mumps is a contagious disease caused by a virus. Even though the vaccine has drastically reduced mumps cases since 1967 when the U.S. mumps vaccination program started, outbreaks continue to occur. In the winter of 2016-2017 Washington state experienced an alarming outbreak of mumps. With 178 cases identified by the end of December 2016, the Washington Department of Health Incident Management Team (IMT) needed data to identify high-risk areas and target outreach efforts to control the spread.

The IMT accessed a variety of data from the Washington Tracking Network (WTN)external icon including immunization rates for school children, areas with populations who have limited English proficiency, hospital locations, and details related to emergency preparedness and response. By looking for patterns within the WTN data, the IMT quickly determined priority areas to target outreach efforts and ways to improve communication strategies among priority populations. For example, the health department translated communication materials into different languages based on the WTN data that identified areas with limited English proficiency.

Because of the availability of the data on the WTN, the health department’s IMT was able to take action in response to the outbreak much faster. By raising awareness of the mumps outbreak and sharing prevention messages to multiple audiences, the mumps outbreak was able to be successfully contained. Instead of spending valuable time slowly gathering necessary data, quick access to data on the WTN meant the Incident Management Team could instead spend time investigating the disease, testing lab results, and sharing prevention strategies with vulnerable and affected populations; which minimized the number of people affected by the mumps outbreak.

Radon is a gas that you cannot see, smell, or taste. According to the U.S. Environmental Protection Agency, radon causes about 20,000 cases of lung cancer each year, making it the second leading cause of lung cancer after smoking. Radon can seep up from the ground and become trapped in buildings. Testing is the only way to know if radon levels are high in a particular home or office. While some regions in Washington are known to have high risk for radon exposure, the EPA’s Map of Radon Zones for Washington identified those zones only at the county level.

The Washington Tracking Programexternal icon worked with state geologists to develop a new, more detailed radon exposure risk map. This map identified areas of low, medium, and high risk of radon exposure based on soil and rock types. Tracking staff also gathered state-wide radon testing data from national testing companies as well as data from the state radon program. These data were used to produce maps that showed testing results by ZIP code. Tracking program staff developed a radon content area on the Washington tracking portal that included maps of radon test data and exposure risk. Layering these maps showed new, previously unknown hot spots, such as around the Puget Sound. It also showed many high to moderate risk areas where no testing had been performed in the past. Based on this new information, tracking program staff raised public awareness about the importance of radon testing through outreach to local public health officials, a news release, and Web and social media posts.

Radon Awareness Leads Tracking Employee to Test Her Own Home

Meghan works in the Washington Tracking Network program. While working on this project, she realized that the home she and her family recently moved into was in a high- risk area for radon and should be tested. Testing revealed an elevated radon level in a basement room her step-daughter had chosen as her bedroom. Acting on the test results, the family took the simple, recommended steps to mitigate the radon. Adding a fan and keeping the bedroom door open as much as possible to increase air circulation helped to lower the radon level and keep Meghan’s family safe.
“I’m so happy we discovered the high radon levels quickly and not after many years of exposing our children to them,” said Meghan.

Accidental poisoning from carbon monoxide (CO) causes about five hundred deaths in the U.S. each year. In Washington, about 53 people go to the hospital for symptoms of CO poisoning every year. Many acute CO poisonings are from exposure to CO from fuel burning appliances, portable generators, or charcoal burners brought inside the home. A study of a CO poisoning outbreak in King County, during power outages in 2006, showed that 70% of people had been exposed to toxic levels of CO from generators or charcoal burners brought inside. In response to new state legislation, the Washington Building Code Council wrote draft rules in 2009 requiring the placement of CO alarms in homes. However, the draft rules applied only to homes with fuel-fired appliances or those with attached garages. As a result, many residents were still at a high risk for carbon monoxide poisoning.

Washington Tracking Network scientists led an agency-wide Carbon Monoxide Poisoning Prevention Planning Workgroup. This workgroup coordinated Washington Department of Health actions with the work of the Washington Building Code Council. Washington Tracking Network staff provided data from their network to decision makers for these new rules. These data described not only Washington’s burden of preventable deaths and sickness due to CO poisoning, but also the risks – such as indoor use of generators – that cause a large number of CO poisonings. This information helped policy-makers recognize the need to extend the building code rules to more types of homes.

The Washington Building Code Council approved a measure to extend the rule to many types of homes. Other organizations and health advocates successfully lobbied the state legislature for the CO poisoning prevention issue and creating more awareness about the new rules. The Washington Department of Health and Washington Tracking Network provided the facts needed to help craft the rule’s language. The Washington Building Code Council now requires all residential buildings in Washington to have carbon monoxide alarms by 2013. The new, stricter rules provide greater protection of public’s health. 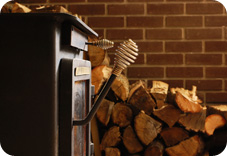 For American Indians and Alaska Natives in Washington, asthma rates are much higher than the state average. These cases are also less likely to be well controlled. Reducing asthma triggers is a key step in preventing asthma attacks. Smoke can trigger an asthma attack and non-certified wood burning stoves are a major source of smoke in some communities. However, persuading community leaders to address smoke from non-certified woodstoves can be very hard.

The Washington Tracking Network partnered with the Asthma Program at the Department of Health to find out where wood burning stoves- especially non-certified stoves – were being used. The data showed that wood burning was common in many communities, but scientists were most concerned about the high use of non-certified stoves in tribal communities where asthma rates were also high. They met with tribal leaders about wood stove use and highlighted how indoor and outdoor smoke from wood stoves can trigger problems for people with asthma.

After seeing the data about wood stove use and how wood smoke can trigger asthma, tribal leaders began to mobilize and motivate stakeholders around their action plan for managing smoke in their communities. 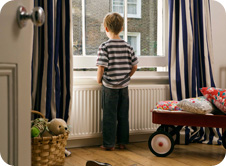 An outdated, paper-based system made lead test reporting inefficient in Washington. State and local health agencies also had no way to share information about lead poisoning investigations in a secure, electronic environment. Using fax machines, paper and phones made ensuring the privacy of lab reports difficult and led to delays in case follow-up.