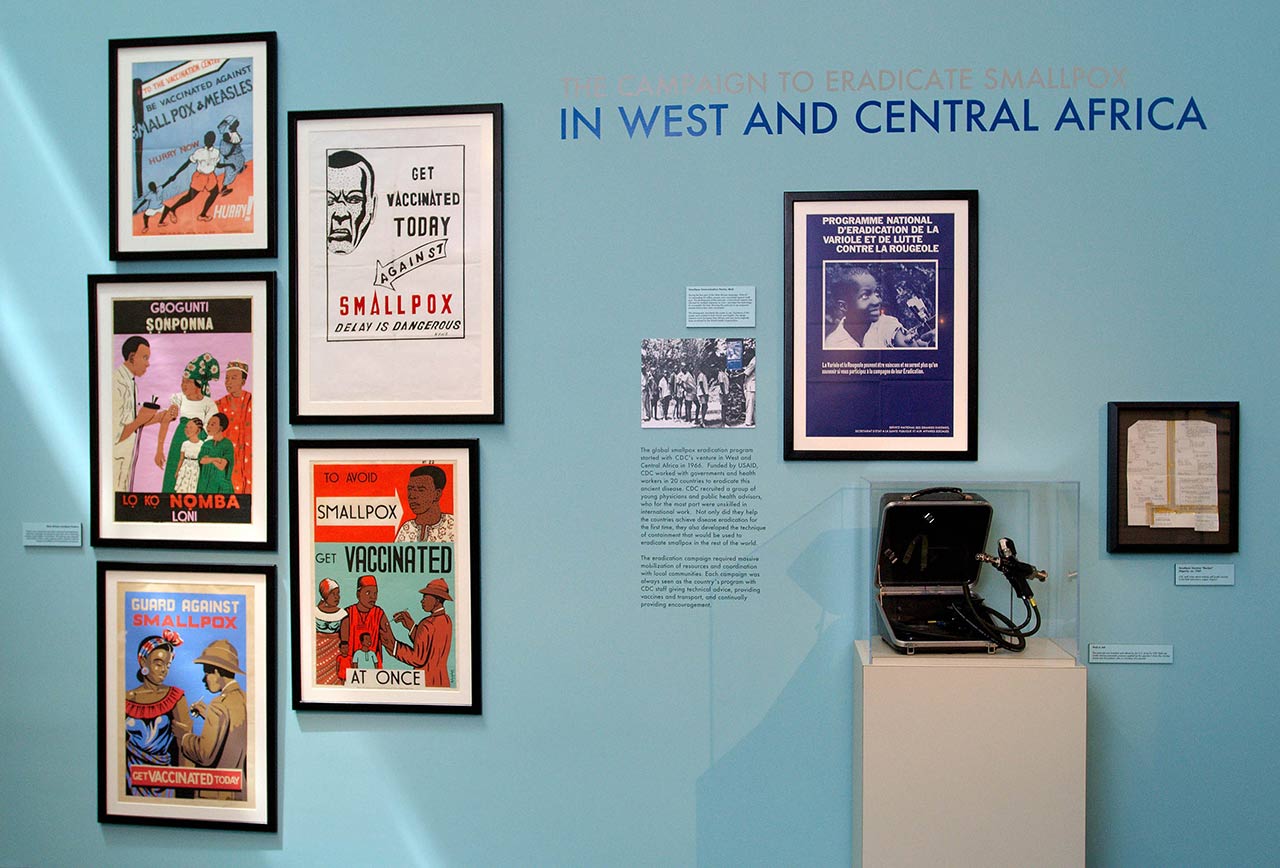 In 1966, the scope of CDC’s public health responsibilities broadened as the agency transformed into a major contributor to global health programs. The next sections of this exhibit detail how CDC responded to international disease outbreaks and assisted with both man-made and natural disasters. Today, the agency continues to build on this work by protecting and promoting health around the world.

This section of the exhibit is dedicated to the most notable international campaign to date: the program to eradicate smallpox. To eradicate a disease means to get rid of it completely.

Smallpox was a very deadly viral disease killing one-third of its victims and leaving survivors scarred for life. The infection begins with a high fever and rash that quickly turns into bumps. The bumps develop into pustules, which are hard protrusions that feel like pebbles under the skin. As the disease progresses, the center of the pustules indent and scabs form over them. During the contagious “sloughing” process, the scabs fall off, leaving smallpox survivors with pitted scars. The high fever one gets during the illness may also result in blindness. Since the virus that causes smallpox is only found in humans, the scientific consensus was that if enough people were vaccinated, the virus would no longer have a host and would die out.

In 1966, the United States partnered with the Soviet Union on a campaign to eradicate smallpox and measles—encouraging the World Health Organizationexternal icon to increase its support for the global program. On behalf of the U.S., CDC recruited 26 young physicians and public health advisors to help countries eradicate this ancient disease and develop a containment technique that could be used throughout the rest of the world. Since they required mobilization of resources and coordination with local communities, eradication campaigns were the individual countries’ programs. CDC provided technical advice, transportation, training, and encouragement, but the vaccination campaign’s work was completed by health workers from each country. 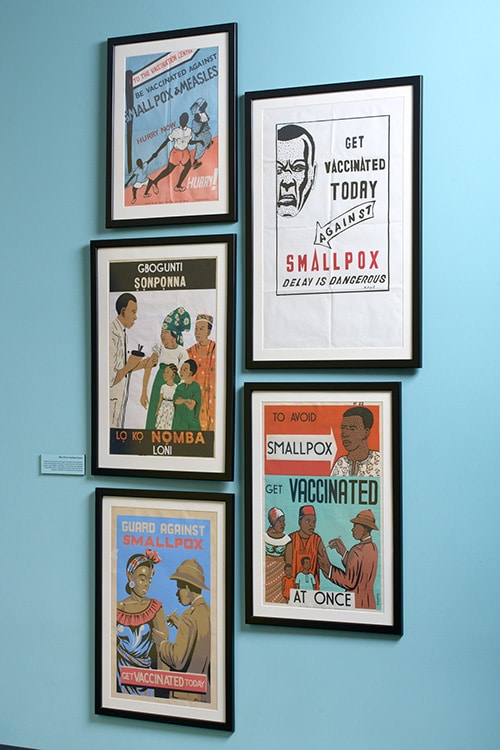 In West Africa, posters were used to educate people about smallpox vaccination campaigns. Most posters were illustrated by regional artists who used bright colors, bold lines, and minimal text. The posters showed people in traditional clothing getting vaccinated or the repercussions of not getting vaccinated. Three of the five posters here show families of four being inoculated, an effort to show that it was important for everyone in a family to receive the vaccine.

Around the world, different strategies and different tools were used for smallpox eradication. The first strategy implemented was mass vaccination, a process that attempted to vaccinate an entire community. During this early phase, health workers usually used the ped-o-jet, a modified pneumatic air gun. It was operated by a foot-pedal instead of electricity. This tool was used to quickly and effectively inject many people with the smallpox vaccine and, in some cases, the measles vaccine. While the ped-o-jet worked well for vaccinating large populations in a single location, such as an entire village or other community, it wasn’t suited for the next eradication strategy, surveillance and house-to-house vaccination. 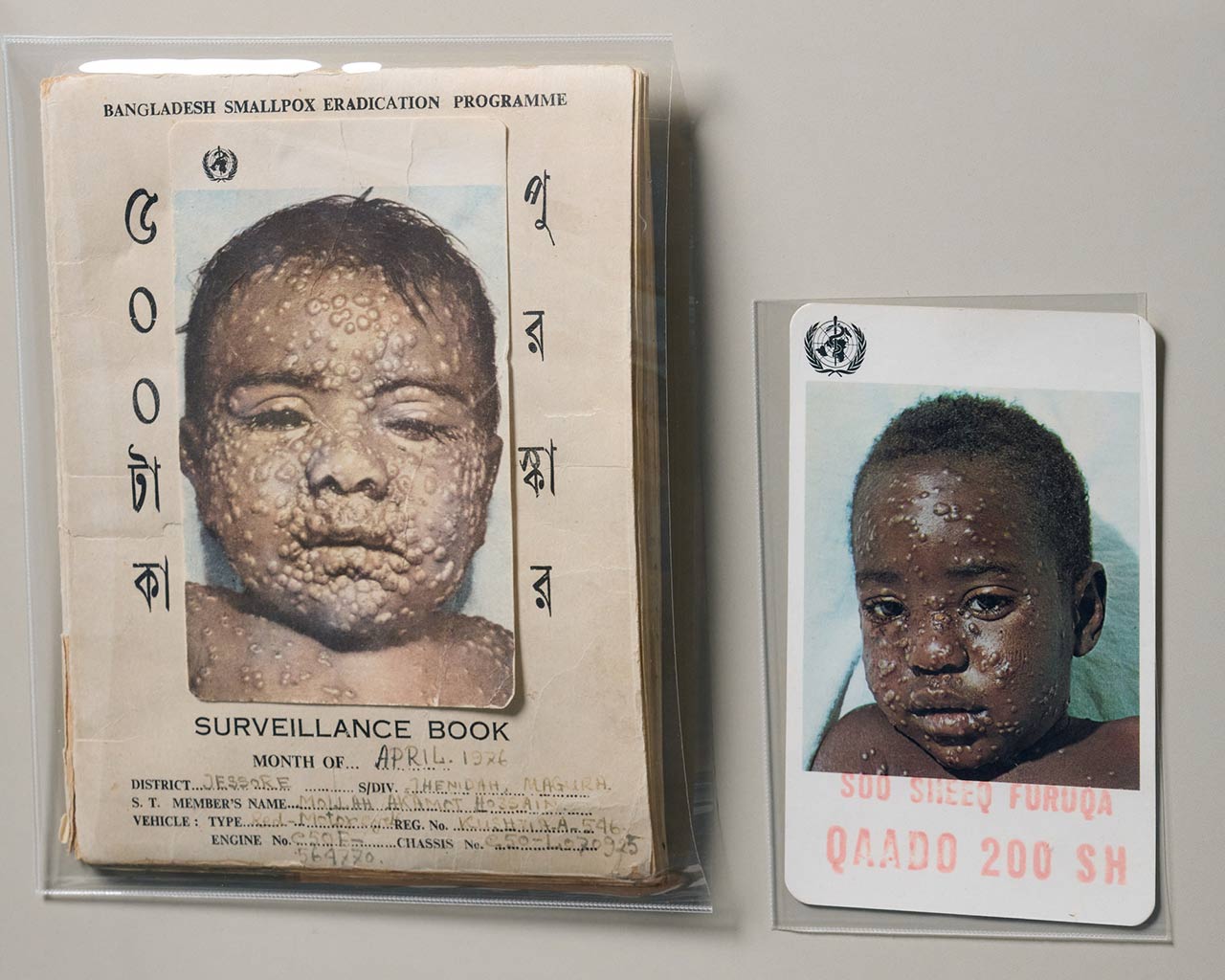 As the program continued, mass vaccination was replaced by surveillance and house-to-house vaccination. Workers searched for new smallpox cases by walking through communities. A photograph (shown here) from a WHO surveillance notebook used in Bangladesh shows a child’s face completely covered in smallpox pustules. Workers would show the picture to villagers and ask if they had seen any persons with a disease that looked like this picture. As part of identifying cases, health workers had to record where they encountered smallpox. They drew maps of villages and communities to chart who had smallpox, who had been exposed, and other relevant information.

Just as the house-to-house vaccination approach replaced mass vaccination, the bifurcated needle replaced the ped-o-jet. A bifurcated needle resembles a normal needle except at the tip, where it splits, and forms a prong. The vaccine administrator dipped the pronged end into the vaccine solution to allow the liquid to collect between the prongs. As the needle pricks the skin’s outer layers multiple times in a circular pattern, the vaccine flows down the needle and enters the skin through the punctures. Over the course of the program, more than 7 million bifurcated needles were used in India. 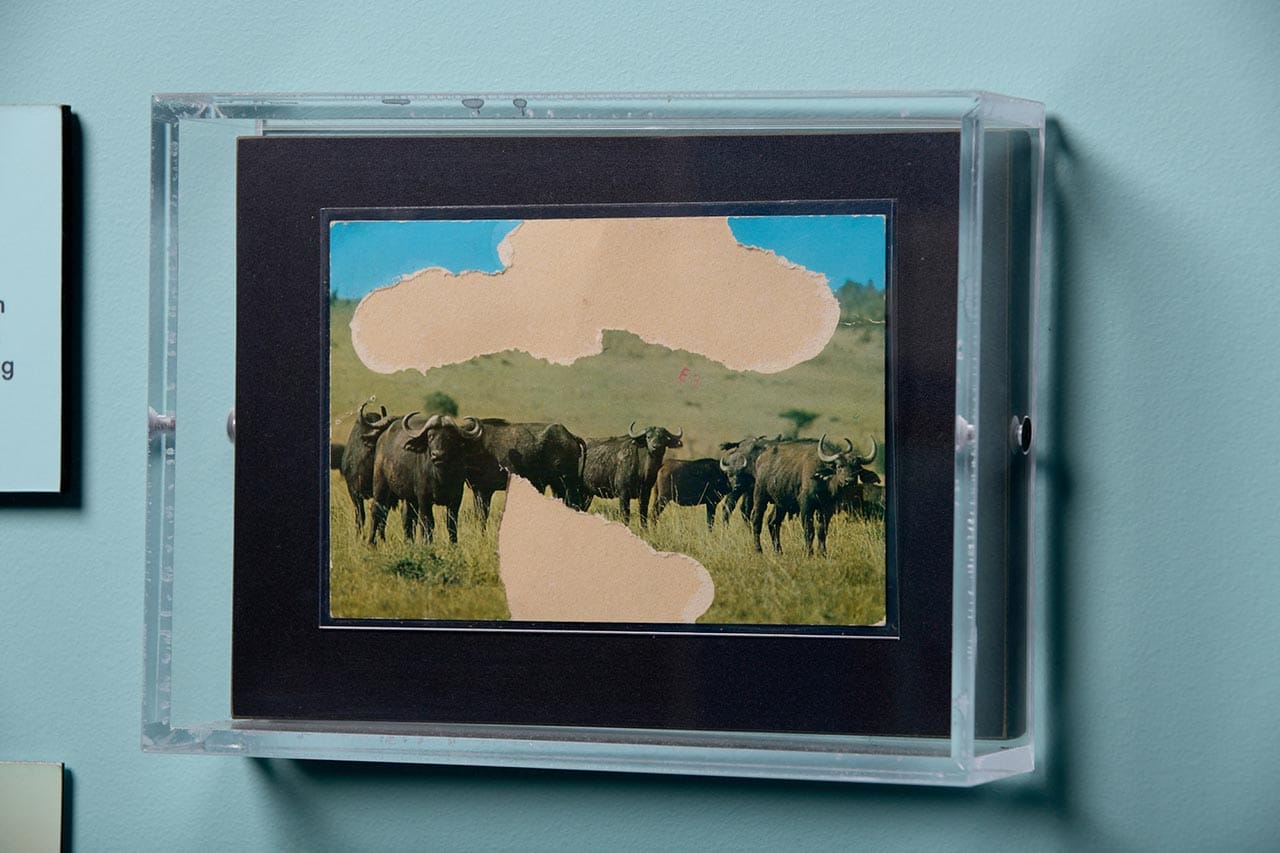 The End of Smallpox

In 1977, a Somalian cook named Ali Maow Maalin was the last person to contract smallpox naturally. In 1979, CDC’s Dr. Donald Millar wrote from Kenya to Dr. William Foege, Director of CDC, that “all the old smallpox warriors are milling around like these buffalo trying to figure out what to do next.” A copy of the postcard can be seen here, which features wild buffalo grazing in a field. The World Health Organization declared the global eradication of smallpox in May 1980. The smallpox eradication program’s legacy was not only the elimination of a deadly disease, but also the start of CDC’s and the Public Health Service’s global health support and program assistance.