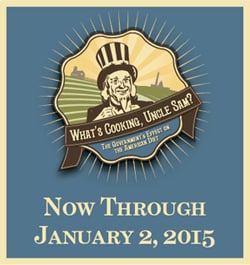 Food. We love it, fear it, and obsess about it.

We demand that our Government ensure that it is safe, cheap, and abundant. In response,

Government has been a factor in the production, regulation, research, innovation, and economics of our food supply. It has also attempted, with varying success, to change the eating habits of Americans. From the farm to the dinner table, explore the records of the National Archives that trace the Government’s effect on what Americans eat.

Follow the story of the Government’s role in our complex relationship with food from farm to factory and kitchen to table.

This exhibition was created by the National Archives and Records Administration, Washington, DC, with support from the Foundation for the National Archives. The national tour of What’s Cooking, Uncle Sam? is made possible by Mars, Incorporated. In Atlanta, the exhibition is sponsored by the Office of the Associate Director for Communication at CDC.

The event is free and open to the public. Reservations are required; RSVP to museum@cdc.gov.