A 35-year-old female resident of India presented with complaints of bilateral flank pain, which had occurred over the past six months. She also had a history of fever for one month and reported painful urination. The patient noticed worms being passed in her urine eight days prior to seeking medical attention. Images were taken of one of the worms (Figures A–D) and sent to CDC/DPDx for diagnostic assistance. What is your diagnosis? Based on what criteria? 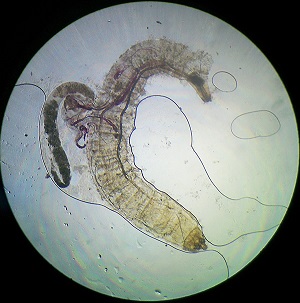 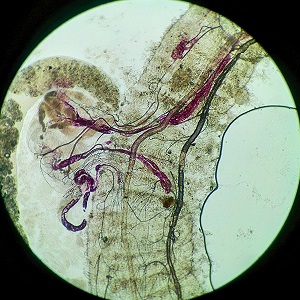 The “worm” was an aquatic fly larva, probably in the family Psychodidae. Although the size of the larva was not provided, diagnostic morphologic features shown included:

These flies are not parasitic as they deposit eggs in small puddles, ponds, or any container with standing water (e.g. toilets). We believe that it is exceedingly unlikely for these larvae to have been passed in the urine and therefore stress that in any and all such cases, it is crucial that passage of larvae be confirmed by the health care provider in a controlled environment. We found that there are reports of urogenital myiasis caused by Psychoda sp. drain flies, one of which documented the passage of larvae in the hospital and additional larvae were directly removed from the bladder of the patient by cystoscope (Patton & Evans, 1929). In most of the published cases, it was unclear whether the larvae were substantiated as being passed in the urine in a controlled setting, or it was explicitly stated that the patient brought the urine specimen with larvae to the physician.