A 34-year-old-woman sought medical assistance at a facility in New Zealand for rigors, fever, and headache. She had been diagnosed with malaria (species not determined) in 2012 in Mozambique and was treated with artesunate. It was unknown if she had traveled since. Blood smears were ordered, stained with Giemsa, and examined at 1000x magnification with oil at a pathology laboratory. Images were captured from a stained thin smear and sent to the DPDx Team for identification. Figures A-E show what was observed in some of the images submitted. What is your diagnosis? Based on what criteria? 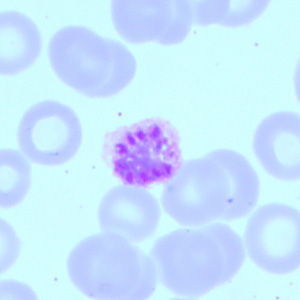 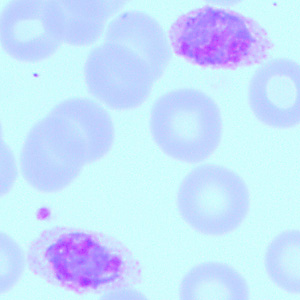 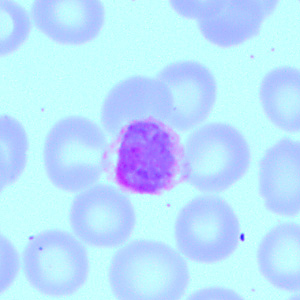 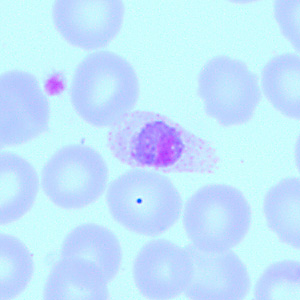 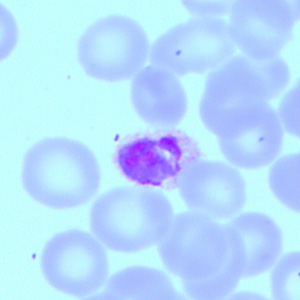 This was a case of malaria caused by Plasmodium ovale. Diagnostic morphologic features shown included:

•infected RBCs demonstrating Schüffner’s stippling. •infected RBCs that demonstrated elongation and/or fimbriation (Figures B and D). •a mature schizont with 12 merozoites (Figure A). •a gametocyte in a slightly enlarged RBC (Figure C).

This case highlights the importance of using a true Giemsa stain for malaria diagnosis, as it allowed for the visualization of Schuffner’s stippling. If the patient had not traveled since 2012, this may have represented a case of relapse, which can be seen in cases of malaria caused by P. ovale and P. vivax.

This case and images were kindly provided by Pathlab, Waikato, New Zealand.