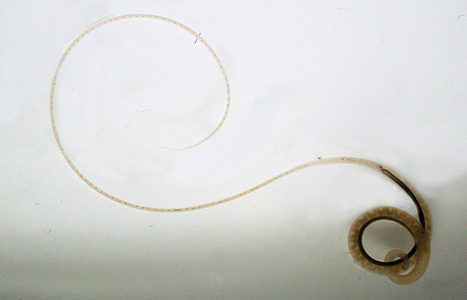 This was a case of trichuriasis caused by Trichuris trichiura. The common name of T. trichiura is the human whipworm which is derived from the long, slender shape of the anterior portion of the adult worm, which resembles the lash of a whip. This is the part of the worm that threads into the mucosa of the human host. The posterior portion of the worm is thicker and is similar to the handle of a whip. Females have a blunt posterior end while that of males (as shown here) is coiled.