A 70-year-old man from the mid-western United States had complaints of fever and general malaise lasting for about one week. He was admitted to a hospital with evidence of hemolytic process (dark urine and low hemoglobin). He had undergone a splenectomy when he was 40 years old. Blood smears were ordered, prepared, and stained with Giemsa. Figures A and B show what was observed on the stained smears at 1000x magnification. What is your diagnosis? Based on what criteria? What other testing, if any, would you recommend? 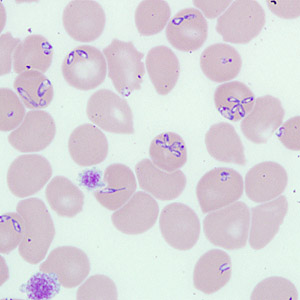 This was a case of babesiosis caused by Babesia sp. Diagnostic morphologic features shown in Figures A and B were:

In general, identification of Babesia to the species or strain level is not possible by morphology, and requires molecular analysis of a blood specimen. PCR was used to confirm that the parasite identified in this specimen was the species of Babesia currently designated MO-1.