Images were taken from a thick blood smear stained with hematoxylin from an adult male from Cameroon. The following images, A–C were all captured from the same field of view. Figure A was captured at 400x magnification; Figures B and C were captured at 1000x oil magnification. What is your diagnosis? Based on what criteria? 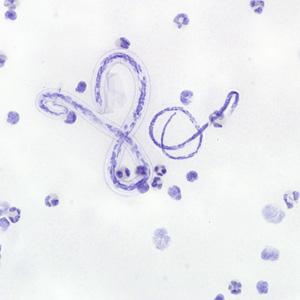 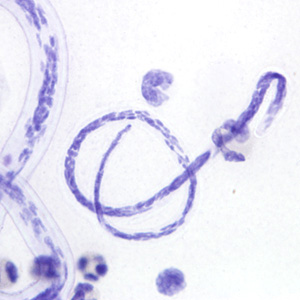 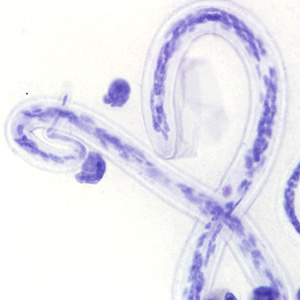 This was a case of filariases caused by both Loa loa and Mansonella perstans. Diagnostic features of the two microfilarie shown in the figures included:

The geographic location of the patient (Cameroon) supports this diagnosis as well.

Although size is an important diagnostic feature for separating the various microfilariae found in humans, the above listed features were sufficient to make an accurate diagnosis. One can also use the relative size of white blood cells to estimate the size of the microfilariae.

This case and images were kindly contributed by Dr. Juan Cuadros González.