A 29-year-old man, with a history of travel to Rwanda, was seen at a local health clinic for fever, headache, mild nausea, and chills. A blood smear was prepared, stained with Giemsa, and examined at 1000× magnification. Figures A and B show what was seen on the thin blood smear. What is your diagnosis? Based on what criteria? 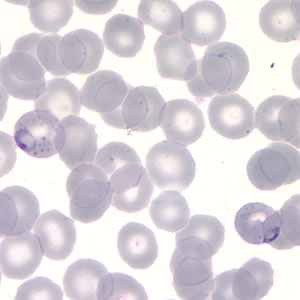 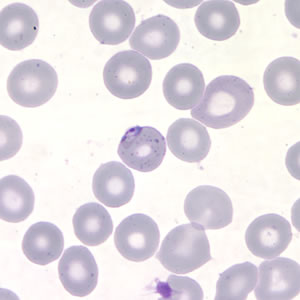 This was a case of malaria caused by Plasmodium falciparum. Diagnostic features were:

The infected RBCs shown in this case have Maurer’s clefts, which should not be confused with Schüffner’s dots or stippling. Maurer’s clefts are associated with infections of P. falciparum and appear as spots or blotches of various sizes. Schüffner’s dots are smaller and finer, more uniform in size, and more numerous. Visualization of these features is dependent on the quality of the smear preparation and of the Giemsa stain (including pH). Maurer’s clefts seem to be observable in the presence of late-stage rings when the cytoplasm of the parasite appears thicker as shown in this case. Of note, Maurer’s clefts seem to play a role in certain cell biochemical pathways.