The Division of Parasitic Diseases’ reference diagnostic laboratory received a specimen from a state health department for confirmatory review. The only patient information given was that the patient had traveled to Nigeria. Figures A-C show what was seen on a stained thin blood smear. What is your diagnosis? Based on what criteria? 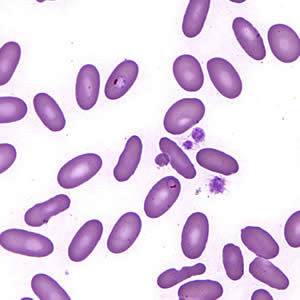 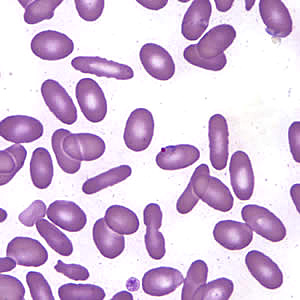 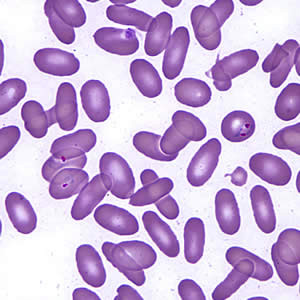 This was a case of malaria caused by Plasmodium falciparum. Diagnostic features were:

In Plasmodium ovale infections, infected RBCs may be enlarged, distorted, fimbriated, roughly ovoid, and stippled. In this case, most infected and uninfected RBCs were ovoid, but the infected cells were not enlarged. The patient likely has hereditary elliptocytosis, a blood disorder in which a large proportion of RBCs are elliptical instead of bi-concave. This condition is caused by mutations in a number of different genes encoding cytoskeletal proteins of RBCs.