A researcher was studying parasites of public health concern found in snails and slugs. A small portion of one specimen had tissue removed and placed in a small dish with a HCl/pepsin solution. Many larvae were observed in the dish, however most were dead or dying, but a few larvae were active. Figure A shows one of the active larvae in at wet mount captured at 200× magnification. Figure B shows a larva under differential interference contrast (DIC) microscopy at 400× magnification. What is your identification of the objects? Based on what criteria? 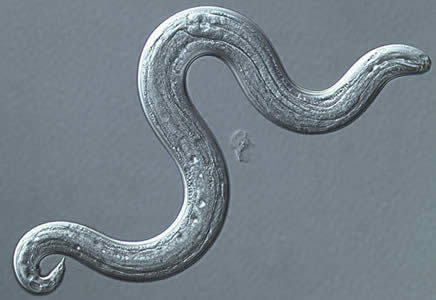 The nematode larvae were filariform third stage (L3) larvae of Angiostrongylus sp., the stage that is infective to mammals. Diagnostic features were: 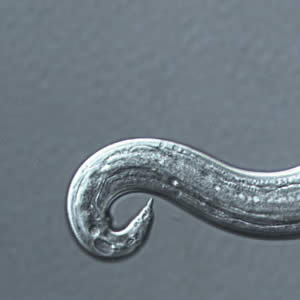 Because it is difficult to differentiate L3 larvae of A. cantonensis from those of A. costaricensis based on morphology, epidemiologic data such as geographical location must also be relied on in order to make a diagnosis. Molecular analysis is useful to confirm the parasite at species level as well. In this specific case, DNA was extracted from a few larvae and a fragment of 1134 base pairs was amplified by PCR from the Angiostrongylus 18S rRNA gene. DNA sequencing analysis was performed on the amplified fragment, and the sequence showed 100% similarity with A. cantonensis 18S rRNA sequence deposited in GenBank under accession number AY295804.