A 27-year-old woman who had been working in Laos, Thailand, and Vietnam for one and a half years was visiting relatives in the U.S. While she was in the U.S., she visited a physician for recurring abdominal discomfort, bloating, and frequent bowel movements that she had experienced over the last two months. The physician asked her to submit stool specimens for an ova and parasites examination (O & P). A wet mount preparation was made from a FEA concentration. Figure A, taken at 200× magnification, shows what was seen on the wet mount in low numbers. The size of the object was approximately 135 µm in length. What is your diagnosis? Based on what criteria? 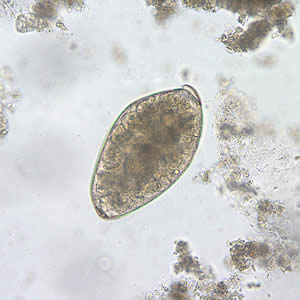 This case was an infection caused by either Fasciolopsis buski or Fasciola hepatica. The eggs of these two trematodes are very difficult to distinguish morphologically and they are also very similar to eggs of Gastrodiscoides hominis in size and appearance. Eggs of both fasciolids and G. hominis are unembryonated when passed in stool. It is recommended that good epidemiological and clinical data be obtained to help make an accurate diagnosis. Diagnostic features included: 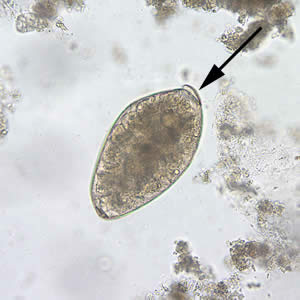 Eggs of F. buski are sometimes broader at the end with an operculum, as the egg in the image shows. Eggs of F. hepatica often have a roughening or irregularity at the abopercular end, which also appears to be present on the egg in Figure A.