A 25-year-old woman with symptoms of intermittent fever, nausea, and headaches went to the emergency room with a temperature of 104º. She had worked and traveled in West Africa for the previous five months. Although she had taken antimalarial drugs while she was abroad, she ceased prophylaxis when she returned to the United States. While at the emergency room, the attending physician ordered a blood smear, which was stained with Wright-Giemsa and examined. Figures A-F show what was observed on the thin smear at 1000× magnification. What is your diagnosis? Based on what criteria? 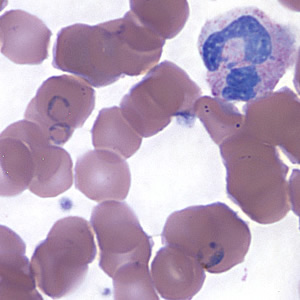 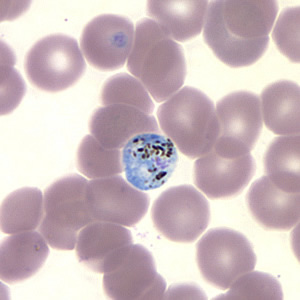 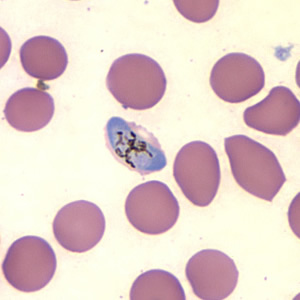 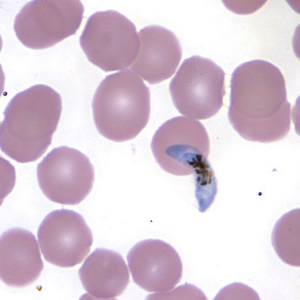 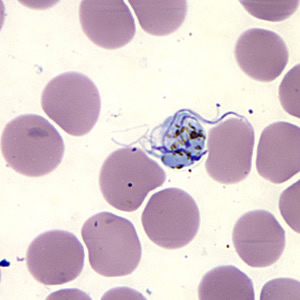 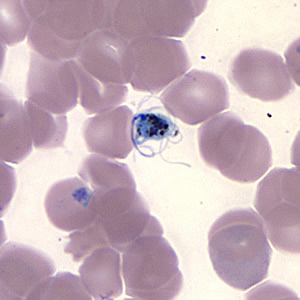 The was a case of malaria caused by Plasmodium falciparum. Diagnostic features included:

Figures E and F are remarkable because they show gametocytes undergoing exflaggellaton. Some of the same blood that the smears were made from was also sent to CDC and PCR analysis was performed. Only P. falciparum was identified by the PCR test. It was later confirmed by the County Health and Human Services that the submitting laboratory did not make smears in a timely manner and that the blood was held on the bench at room temperature for a few hours. This case demonstrates the need to prepare blood smears immediately after blood collection to prevent unusual morphologic presentation of parasites in the specimen.

This case was kindly contributed by the San Diego County Health and Human Services.