A 32-year-old male from Nigeria had been visiting some relatives in the United States for approximately a week. He went to a local emergency room for headaches, nausea, and general weakness and fatigue. Blood was drawn by fingerstick and thick and thin blood films were made. Images from the thick smears were captured and sent to CDC for confirmation. Figures A and B show what was seen on the Giemsa stained thick film when it was examined. What is your diagnosis? Based on what criteria? What additional steps would you recommend to achieve a definitive diagnosis? 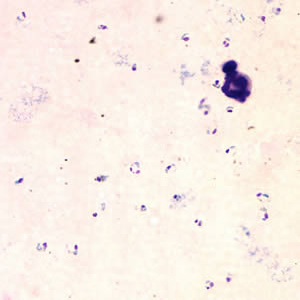 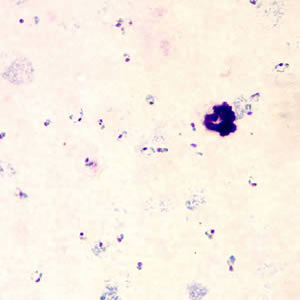 This was a case of malaria caused by Plasmodium falciparum. Diagnostic features seen in images from the thick film were:

While it is important to have a stained thin blood film to make a final diagnosis, an identification of P. falciparum can sometimes be made in some cases from a stained thick blood film. Examining the thick film first is useful for screening and for detecting possible mixed infections. Typical morphologic features of P. falciparum such as thin delicate rings, double chromatin dots, multiply infected cells, appliqué forms, and normal sized red blood cells are shown in the Figure C below (from the thin smear of the same case). 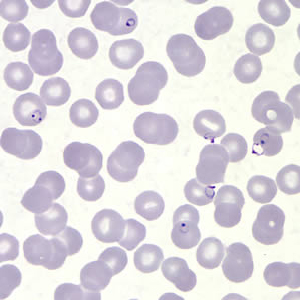